In my 49ers-Seahawks preview a few weeks ago, I talked about how the success or failure of Mike Singletary's coaching tenure hinged on whether or not his motivational tactics--dropping trou and all--led to a newfound, overachieving 49er team. Although the stats didn't show very much success in that regard during the Seahawks game, it was clear nevertheless that Singletary, at the very least, wasn't going to fiddle while Santa Clara burned.

After two weeks of preparation, regulation, and motivation, the story seems entirely different coming out of the Cardinals game. Sure, the 49ers lost ("Can't win with ‘em!"). Sure, there were a couple of boneheaded 49er penalties ("We are not a charity!"). Sure, the end of the game forced us to suspend disbelief ("Can't coach with ‘em!"). Despite all that, however, the stats are pretty clear. In Week 10, the 49ers accomplished a couple of things that the Week 1-8 version of this team did not. 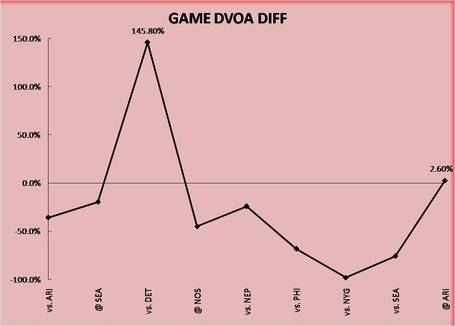 Has Mike Singletary laid the foundation? After the jump I'll tell you what the 49ers accomplished this week, break it down statistically, and see how they performed in the three crucial SVW situations...

As the above graph shows, Monday night was only the second time all season that the 49ers outplayed their opponent. In fact, the 49ers' game DVOA of +6.4% (which is compared to the Cardinals' +3.8% in the graph) means that we actually witnessed an above-average NFL performance from our beloved 2-7 team!!!

One might argue that outplaying the Cardinals by 2.60% is no reason to start drafting Mike Singletary's contract extension. While it's true that one game isn't enough to draw any major conclusions, remember that these weren't your father's Cardinals. The two positive games in the above graph bear no resemblance in terms of who the opponent was and where the game was played. Outplaying the Circus Lions (ranked 31st in DVOA) as a heavy home favorite is one thing. Outplaying the Cardinals (ranked 4th in DVOA) as a heavy road underdog is something entirely different.

The next graph takes caliber of opponent into account. It shows how much the 49ers have underachieved or overachieved in their games based on how their season DVOA compares with their opponent's. Positive numbers mean the 49ers played better than expected given their DVOA matchup in a game, while negative numbers mean the 49ers played worse than expected (Note: I've presented most of this information in a previous post, just not graphically). 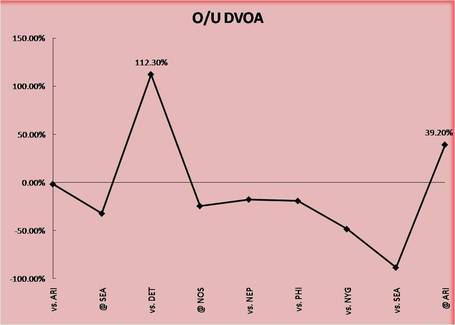 In general, this graph shows that the Cardinal's game wasn't just the second time that the 49ers outplayed their opponent; it was the second time the 49ers' performance exceeded DVOA expectations. What's far more interesting though, and indicative of just how impressive the 49ers' performance was on Monday night, outplaying the Cardinals by a miniscule 2.60% was actually almost 40% better than they were supposed to play. If you simply subtract these numbers, you find that the Niners were actually supposed to play 36.60% worse than the Cardinals, not 2.60% better. Therefore, what the statistics shown in these two graphs really tell us is that, on Monday night, the 49ers outplayed a better team for the first time all season (not to mention that the game was on the road).

It's too early to know whether or not the Cardinals game signals a change in attitude, and if so, whether that change in attitude is the result of Mike Singletary's motivational tactics. At this point, other causes (e.g., the change to Hill) are similarly likely. Only time will tell. But if the 49ers continue to overachieve, Singletary can drop trou whenever and wherever he feels it's necessary; perhaps even on the dotted line of a new contract.

Just to refresh our memories, I identified the following strength vs. weakness (SVW) matchups for the 49ers in their game against the Cardinals:

First half offense-The Niners did pretty well. Of their 32 plays, 12 were successful (37.5%). This might not seem all that good. But considering the matchup, it was. That level of success translated to 190 total yards of offense, two offensive touchdowns, 0 sacks allowed, and 0 giveaways.

3rd & long defense-The Niners were successful on 4 of 6 (66.7%) plays in this situation. Again, pretty damn good for a team that had a DVOA disadvantage of almost 170% here. I mean, for all intents and purposes, Arizona's offense should have gone 6 for 6, not 2 for 6.

So going back to the golf analogy I used to review the Seahawks game SVW's, the 49ers clearly birdied all three holes. I'd even consider their defensive performance on 3rd and long an eagle. Now that's overachievement! Let's hope Singletary's able to keep it up in the weeks ahead.