As I talked about in my comments during the all-time #2 WR voting, I'm seriously conflicted when it comes to T.O.'s 8 seasons in a 49ers uniform. On one hand, there's the consistent elite performance and The Catch II. Those are fond memories. On the other hand, there's the insubordination against Mooch, the slandering of Jeff Garcia, the isolation from his teammates, the untimely dropped passes, and the constant drama surrounding his endzone celebrations. Those are not fond memories.

The one event that coalesced all of T.O.'s negatives was his total lack of class at Texas Stadium on December 8, 2002. It's unbelievably ironic that, nearly 6 years to the day of that stunt, T.O. will be playing the 49ers in that stadium, wearing the uniform of the team he so disrespected. And what an irony it would be if, in this week's game, the 49ers played a role in the continued demise of T.O. as an elite wide receiver. The question for Niner fans this week is, "Which T.O. is going to show up?" Will it be the T.O. that made the Niners secondary look like a junior varsity unit 3 years ago? Or will it be the T.O. that has failed to show up in game after game this season, with or without Tony Romo. That is the question I'll address in this week's statistical preview.

HAS THE SHARPIE RUN OUT OF INK?

Although some of you might not like them (what's up methodrampage?), those of you that have been reading my previews and reviews already know about DYAR and EYds by now, so I'm not going to re-explain them in depth here. All I'll remind you of is that DYAR tells you a player's overall value, while the discrepancy between EYds and actual yards tells you a player's value per play. Below is a graph showing the trajectory of T.O.'s DYAR per game over the course of his career. I've made the "per game" adjustment to account for differences in the number of games he's played each season. 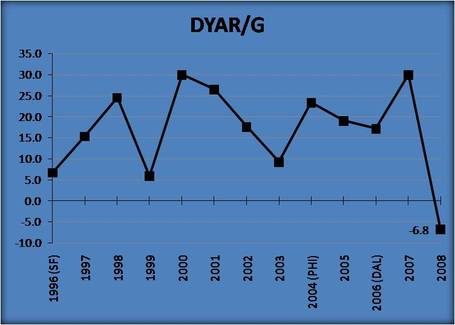 After the jump, I'll quantify just how bad a season T.O. is having, tell you what kind of numbers I expect from him this week, identify two crucial game situations to watch for during the Cowboys game, and make my game prediction...

As the graph shows, 2008 is the first season of T.O.'s career that he actually has a negative DYAR (-6.8), making this his worst season from a value standpoint. His previous worst DYAR/G was 5.9 in 1999, and his rookie-year DYAR/G was 6.7. So basically, the 2008 version of T.O. is 13.5 yards less valuable per game to the Cowboys than he was to the 49ers in his rookie season, when some guy named Jerry Rice was the Hall of Famer in waiting. What's especially interesting, though, is that T.O.'s collapse in value is totally unexpected. Not only does it go against the fact that he's never had a negative DYAR before; it comes only one season removed from the best DYAR/G season of his career. An argument might be made that his substandard DYAR/G this season is due to Tony Romo's injury or any of the other injuries surrounding T.O. in the Cowboys' offense. Honestly, though, does anything T.O.'s going through right now compare to having the two-headed monster of J.J. Stokes and Tai Streets lining up on the other side of the formation? 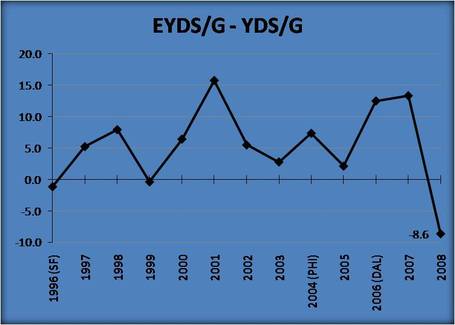 Again, we see that the 2008 season has been totally out of character for T.O. Unlike most seasons, in which he's played better than the league average on a situational basis, he's gaining 8.6 yards per game this season less than an average wide receiver would gain in the same game situations. Not only is this his worst season in terms of situational value, it's almost 8 times worse than his rookie season!!! Also notice that, like his DYAR/G collapse, his situational efficiency collapse comes immediately after one of the best seasons of his career. Just last season, T.O. performed 13.3 yards per game better than average on a situational basis.

Clearly, whether you look at DYAR or EYds, you find the same thing. This is easily T.O.'s worst season in the NFL. Both overall and on a situational basis, he's currently a worse wide receiver than he was in his rookie season. That's pretty hard to fathom being that the intervening 11 seasons have been so consistently good. What does this mean for answering the question, "Which T.O. is going to show up?" Well, given his DYAR and EYds for this season, we should not expect T.O. to put up the 143-yard, 2 TD performance that he did last time he played the 49ers. Factoring in the 49ers' 16th-ranked pass defense DVOA, I figure we should expect a 2008-type performance from T.O. this week; something like 4 catches for 50 yards and a touchdown.

Here's how the 49ers stack up against the Cowboys in terms of DVOA:

All in all, this is actually a pretty even matchup for the 49ers. They're not playing the really bad Rams; nor are they playing the really good Giants. The 6.4% overall disadvantage they have against the Cowboys is almost identical to the 6.6% disadvantage they had going into their 30-21 loss to the Patriots. With respect to the three team units, the top-ranked 49ers special teams has a huge 13.5% advantage over the Cowboys' special teams, which offsets the Cowboys' 10.4% advantage when the 49ers defense is on the field. Finally, although the 49ers offense performs about 12% worse than league average, at least they're going against a defense that also performs below average.

Aside from the special teams matchup I just identified, the two other SVW's to focus on during this week's 49ers-Cowboys matchup are detailed below:

"WITH HIGH HOPE FOR THE FUTURE, NO PREDICTION IS VENTURED." - ABRAHAM LINCOLN

Before I give my prediction, I'd just like to say that my 28-13 prediction last week was pretty close, but it would have been even closer if I had actually trusted the stats, which predicted 35-13. I discounted a TD because I just didn't think the 49ers offense could score 35 points with Shaun Hill at QB. Not because I thought he's bad, but because I thought the grind-it-out kind of game that Martz would call with Hill limited the quick-strike scoring that's usually necessary for putting up 35 points. Guess I failed to account for Bulger gift-wrapping short fields. Anyway, given the statistical matchup between the 49ers and the Cowboys, here's my prediction for this week's game:

**DVOA, DYAR, and EYds statistics used to produce this article were obtained from Football Outsiders.