Just to get this out of the way immediately, I obviously took a backwards K in my prediction of a so-so T.O. performance this week. Three things though. First, the stats couldn't account for T.O. having 2 catches for 120 yards and a touchdown on plays where he blatantly committed an offensive pass interference that was not called. Second, and perhaps I had an influence on this, 67% of those of us who voted on the preview poll thought that T.O. would have less than 100 receiving yards, and only 9% correctly predicted that he would have over 150. Finally, T.O. still has a negative DYAR (-7; ranked 65th) and a lopsided expected yards discrepancy (-133) even after the second best yardage game of his career. In fact, his expected yards discrepancy per game actually got worse, dropping from -8.6 to -12.1. So I guess what I'm saying here is, "Yeah. I was wrong, but I wasn't as wrong as you think." Sunday's performance by T.O. was totally unexpected based on the stats, and therein lies a major limitation of statistics: It is good at predicting "typical" performance, but not so good at predicting "atypical" performance.

Now, with that out of the way, I'd like to focus on what most 49er fans have been focusing on since Sunday, and I don't mean the choice between roasting and deep frying the Thanksgiving poultry. I'm talking about the atrocious performance of the 49er offense in the red zone against the Cowboys. Most of the blame over the past 3 days has been centered around Mike Martz's play-calling...you know...the pass-run-pass tendency that even I picked up on a couple of weeks ago. Well, there's a dirty little secret, borne out by the stats, that tells me that Martz may not be as much of an offensive genius as most NFL fans think he is.

IN THE RED (ZONE)

We all know the legend of Mike Martz. He turned a guy with "bag boy" and "Arena League player" on his resume into a Super-Bowl-winning, multiple-MVP quarterback. He was the ringmaster of "The Greatest Show on Turf." Hell, he even gilded Jon "The Interception Machine" Kitna's right arm. What's become obvious over the years, though, is that his offense is bred for easy situations. Versus a defensive genius (See Bill Belichick), or when the pressure is on (See Super Bowl XXXVI), however, his offense can be amazingly inefficient. It's great at racking up yardage, but it's not so great at succeeding in the situations that most impact the outcome of an NFL game. Nowhere is this more apparent than in the red zone.

Below is a chart showing the efficiency of Martz-led offenses both overall (black line) and in the red zone (red line): 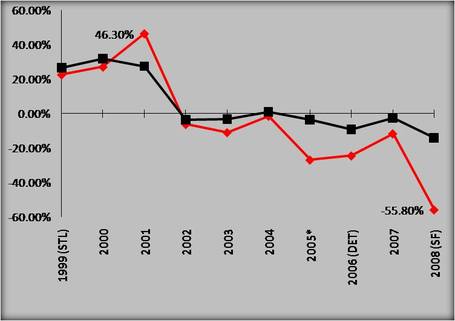 *Martz only coached the Rams offense for 5 games during the 2005 season.

After the jump, I'll explain the chart, explain why talent hasn't been as important as you think, compare the red zone stats with other field zones, and see how the 49ers did in their SVW situations...

Martz has either been an offensive coordinator or a play-calling head coach for 10 seasons in the NFL. Of those 10 seasons, his offense has had a negative red zone DVOA in 7 of them (2002-2008). Furthermore, only once (2001) has his red zone offense performed better than his offense overall. In other words, only once has his offense been more situationally efficient inside the opponent's 20 yard line than it was across the other 80 yards of the field. Surprisingly, his red zone pass offenses have performed especially poorly. For the sake of readability, I didn't include these stats on the chart, but the only two seasons in which Martz's pass offense performed better than league-average in the red zone were 1999 and 2001, seasons in which that offense advanced to the Super Bowl. How's that for a connection between red zone performance and winning? Now, obviously, 10 is too small a sample of seasons to draw rock-solid conclusions, but trust me when I tell you that red zone efficiency is one of the most important stats in the NFL when it comes to winning and losing. Perhaps that's why Martz's offenses haven't won as much as you'd expect.

I'm expecting an argument from methodrampage at some point in the near future along the lines of, "Well, Martz had great talent from 1999-2001, and not-so-great talent after that. I mean, look at the garbage he has to work with this season!" Here's the problem though. Below is a list of the top QB, RB, and WR (yardage-wise) for each of his offenses over the past 10 seasons:

As you can see, the only thing you can say about differences in talent are that (a) he hasn't had Kurt Warner running his offense since 2001, (b) he didn't have a top-notch RB in 2006-2007, and (c) Isaac Bruce is the Methuselah of WRs. What you can't say is that Martz has had a bunch of Pop-Warner-caliber skill position players executing his offense. Even if we agree that Kitna-Jones-McDonald is light years away from Warner-Faulk-Bruce, what about the difference between Warner-Faulk-Holt and Bulger-Faulk-Holt, or how about Warner-Faulk-Holt vs. Bulger-Jackson-Holt? I'm sure when you were drafting your fantasy football teams from 2002-2005, you weren't saying, "Man, my team's going to suck if I end up with guys from the Rams offense." The point here is that, although there's been a dropoff in talent over the years, sometimes major (2006) and sometimes minor (2002), the dropoff doesn't do a very good job in explaining why Martz-led offenses have performed worse than the league average inside the red zone for 7 years running.

I'd like to mention one last thing about how Martz's offenses are yard-rich but efficiency-poor. Below is a table showing the "typical" performance of a Martz-led offense in the 5 field zones delineated by Football Outsiders. I'm using "typical" (aka median) efficiency rather than "average" (aka mean) efficiency because an average based on only 10 numbers tends to be skewed in one direction or the other due to sample size, especially when there are highly atypical values, as is the case here:

Notice: Outside the opponent's 40 yard line, Martz's offenses have performed above average, with a well-above-average performance between the 40s. In contrast, his offenses are, at best, average in the scoring zones.

Just to refresh our memories, I identified the following strength vs. weakness (SVW) matchups for the 49ers in their game against the Cowboys:

So how did they do? As you may recall, the bottom line of the 2nd-down SVWs was that the 49ers' defense needed to limit Cowboy yardage on 1st down, putting them into 2nd and long situations, rather than 2nd and short situations. That's how I'm going to score success/failure here. But first, the special teams.

Special Teams - Channeling Starkey here, "Wow. No Chance. No Chance." The Niners had a 13.1% advantage in this matchup, but performed 3.1% worse than the 30th-ranked Cowboy special teams. It kind of goes without saying that, when you have inferior talent on offense/defense, and when you're on the road, you MUST exploit this level of special teams advantage. Losing Rossum to injury didn't help, of course, but neither did special-teams-stud Michael Robinson channeling Kwame Harris on punt protection duties. Score: Double Bogey.

1st-Down Defense - The Cowboys had 26 total 1st-down plays on Sunday. Ignoring one victory-formation kneel down at the end of the game, the Niners' defense forced the Cowboys' offense into 2nd and long 14 times, allowed 2nd and short 4 times, allowed another first down once, and put the Cowboys into 2nd and mid 6 times. All told, that's a 14-5-6 performance, which is actually pretty good. This confirms my impression during the game that they were doing a good job of making the game easier for themselves on defense. So what happened? Well, on those 4 2nd-and-short plays, the Niners' defense failed all 4 times, giving up a total of 16 yards and 4 first downs. On the 2nd-and-long plays, the Niners' defense was successful on 12 of 14, stuffing the Cowboys for no gain on 7 plays, allowing a total of 33 yards for the 14 plays, and recovering Romo's ill-advised lateral. That's pretty damn good defense if you ask me. Score: Birdie.

Using my golf scoring system, the Niners were 1-over in two holes. They can't shoot above par and expect to win many games on the road against superior teams.

So, taking the most relevant game stats into account, why did the 49ers lose to the Cowboys? Well, it sure wasn't because of their SVW situation on 1st/2nd down. Rather, it was a combination of (a) having a poor red zone offense coached by a poor- red-zone-offense-prone coordinator, (b) the failure to exploit a favorable special teams matchup, and (c) a combination of poor officiating and poor defending (more so the former) on the defensive back end.

Next up this Friday...a preview of the Bills game - gasp - east of the Mississippi River.

**DVOA statistics used to produce this article were obtained from Football Outsiders.