This week's 49er opponent is the Arizona Cardinals, and-news flash-these are NOT your father's St. Louis/Phoenix/Arizona Cardinals. The unimpressive history of the Cardinals franchise can be summed up in two woeful coaching statistics: Don Coryell (1973-1977) holds the franchise record for wins with a mere 42, and the Cardinals have had only one winning regular season since his tenure ended. In comparison, the 49ers have had 19 winning seasons over the past 32 years, and have had 3 separate coaches win over 42 regular season games during that time (Walsh - 92, Seifert - 98, Mariucci - 57).

New Cardinals head coach Ken Wisenhunt seems poised to make a run at Coryell. Over the past two seasons, he's led the Cardinals to a 13-11 record, and, if nothing else, has awakened the franchise out of its decades-long hibernation. Although one might argue that an influx of talent has had as much to do with the Cardinals' resurgence as has Wisenhunt, this week's 49ers-Cardinals statistical preview will prove otherwise. Why am I going to focus on coaching yet again this week? It turns out that the Cardinals' house under Wisenhunt in 2007-2008 was built upon a foundation laid by Dennis Green from 2004-2006. One coach takes over a franchise in disarray, and lays the foundation for winning; his successor actually starts winning games. Perhaps there's a lesson here for our beloved 49ers?

SCOTTY, CAN YOU HEAR ME?

Below is a graph charting the Cardinals' overall team efficiency (DVOA) rankings from 2003-2008: 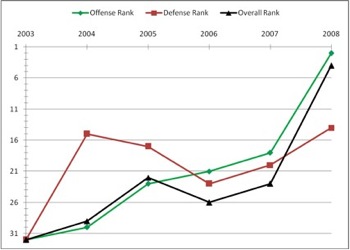 After the jump, I'll tell you the hidden meaning of this graph, which provides a Cardinals-based clue about why the 49ers can't get over the hump. Also, I'll go over the relevant stats for this week's game, give you 3 bellwether game situations to focus on, and, of course, pretend I'm Nostradamus...

As is obvious in this graph, the Cardinals have shown steady overall statistical improvement for the past 5 seasons, starting during Green's tenure and continuing into the Wisenhunt era. In other words, the Cardinals' rebirth actually started when Green was hired in 2004. What's less obvious in the graph is that, while Green was in Arizona, the Cardinals' offensive and defensive units improved simultaneously only during his first season as head coach. This is shown by the trajectories of the green line and the red line. Except for when he took over the worst team in the league (2003-2004), the two lines went in opposite directions throughout Green's stay with the club. Contrast this with Wisenhunt's tenure thus far. As the graph shows, Arizona has improved each season on both offense and defense simultaneously.  Perhaps these differences explain why the Cardinals under Green were the perennial "sleeper" pick that couldn't quite get over the hump, while Wisenhunt's teams seem to have gotten over said hump. This, my friends, is what it looks like when one coach lays the foundation, and his successor builds the house.

Now, let's compare this analysis to the 49ers' current situation. Actually, I don't need to present any more fancy graphs because we all know that the parallels are obvious. Nolan took over the worst team in the league in 2005, and increased its win total for two seasons thanks to a simultaneous improvement in offense and defense. Over the past two seasons, however, in which the 49ers were a popular "sleeper" pick, the offense sucked while the defense improved (2007), and the defense sucked while the offense improved (2008). Nolan was fired because his 49ers couldn't quite get over the hump, but he laid the foundation of improvement for his successor (whoever that might end up being). Hopefully, the 49ers learn the same lesson that the Cardinals did, and they hire a coach that can get the two units moving in the same direction. Scotty, can you hear me?

Here's how the 49ers stack up against the Cardinals in terms of DVOA:

In my last statistical preview, I listed a plethora of game situations in which the 49ers and Seahawks played strength vs. weakness, strength vs. strength, or weakness vs. weakness. Looking back at it, even a stats guy like me started getting a little dizzy with all the numbers. Therefore, starting this week, I'm only going to focus your attention on the situations that involve strength (DVOA ranks  1-8) vs. weakness (DVOA ranks 25-32), which I'll call SVW for short (Hey, isn't that a Law and Order spinoff?). Aside from the matchup I already listed above (total DVOA), there are 3 SVWs to focus on during this week's 49ers-Cardinals Monday night matchup:

Again, this matchup doesn't look all that promising. The Cardinals aren't weak in any situations where the 49ers are strong. Uh oh. Well, I guess, on the flip side, there are only 3 SVWs in favor of the Cardinals. In any event, if the 49ers are going to keep this game close, they must perform better than expected in these 3 situations. Otherwise, this one might be over by halftime.

"WITH HIGH HOPE FOR THE FUTURE, NO PREDICTION IS VENTURED." - ABRAHAM LINCOLN

Given the statistical matchup between the 49ers and the Cardinals, but taking into account the fact that the 49ers will not be starting a turnover machine at quarterback, here's my prediction for this week's game:

**DVOA statistics used to produce this article were obtained from Football Outsiders.