It's rather amazing, but we are officially done with the fantasy football regular season.  I realized I mixed up the scheduling and so the title games will be during Week 17.  Not great, but not the end of the world.  This season certainly flown by.  Tonight's matchup between the Saints and the Bears kicks off the playoffs for all four of our Niners Nation fantasy football leagues and I thought I'd get previews of each league from the various commissioners.  I've also taken a screen shot of the bracket for each league. 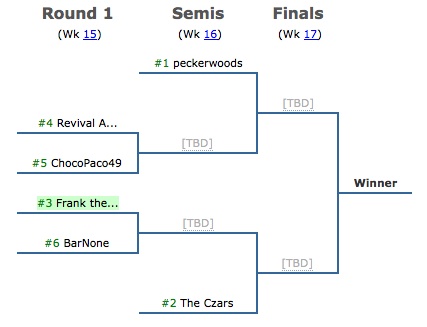 NN #1 saw four teams tie at 8-6 with only two getting playoff spots.  The two teams are mine (Frank the Tank) and the 6 seed BarNone, who happened to be in the same division as me.  Even more of a coincidence is that we faced each other the final week of the season, with BarNone winning 102-77.1  We'll see if he can spring the early upset.

The favorites have to be the top two seeds, who also happened to be the two highest scoring teams in the league.  The first round bye comes at a perfect time for peckerwoods as he's just trying to get his RBs healthy. 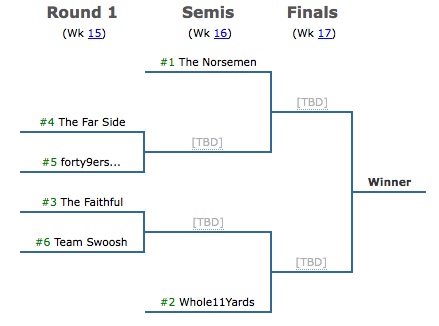 So here's how the playoffs breakdown. The two teams with round one byes are Whole 11 yards and The Norsemen. Both had records of 9-5 and despite some faltering in the final few weeks, both will be sipping lemonade next week while the other four teams duke it out. After facing the former #1 in a loser goes home game last week (Myself, StrictlyFootball), The Faithful bullied his way into the top spot the first division. Forty9ers3298 is going into the playoffs hot, after winning the last 6 out of 7 games. He might just be the fantasy equivalent of the 06 Steelers, watch out.

The Far Side had the exact same record as his fellow division 3 rival, The Norsemen, but was relegated to a second place wild card spot due to losing the (fourth down on the list) tie breaking scenario, points scored (that just sucks). Team Swoosh is the last to procure a wildcard spot and despite having identical records as myself and Rainers, being the way the league is set up, he won the tie break for his points scored. While just three weeks ago this league was spread far apart in wins and losses, the final regular season weeks have proved to be as topsy turny as their real life football counterparts. Congrats and good luck to those that made it, and there's always next year for those who didn't.

Niners Nation #2 and #4 after the jump, with a particularly thorough preview by AmazingAaron for NN #4. 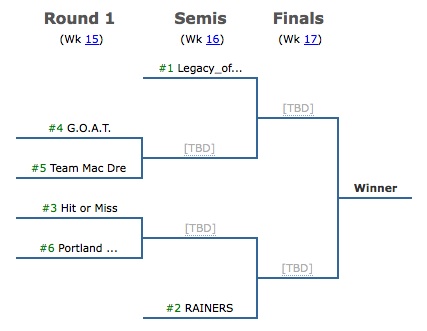 The playoff teams in order are; Legacy of Walsh (11-3 division winner), Rainers (8-6, Division winner), Hit Or Miss (11-3), G.O.A.T. (11-3), Team Mac Dre (8-6), Portland Bowlblazers (8-6).  Legacy of Walsh and Rainers have a first round bye for winning there division.  So this week has 3rd seed Hit Or Miss against 6th seed Portland Bowlblazers.  Bowlblazers started out the season with a bang going 7-1 but they enter the playoffs on a wimper losing 5 of there last 6, including two weeks ago losing to there current opponent Hit or Miss.

Even though the Bowlblazers lost 2 weeks ago I think they have a good chance of avenging there loss.  The dynamic duo of Adrian Peterson and Michael Turner is a force to be reckoned with.  His wr tandem is good but not great with Bernard Berrian and Marques Colston (Desean Jackson and Dwayne Bowe sitting on his bench).  The real question mark is with his QB he has Gus Frerotte who left last weeks game with an injury and may not even play this week (with Sage Rosenfels sitting on his bench who also probably will not play).  QB is the strong position of Team Hit Or Miss with Drew Brees being so dominant.  Even though Hit or Miss is projected to win, has scored more points on the year, has a better record and recently beat the Bowlblazers, I give the edge to the Bowlblazers.

The other game this week is 4th seed G.O.A.T. (my team) vs. 5th seed Team Mac Dre.  We played back in week 4 and Team Mac Dre beat me.  Team Mac Dre had most of there losses come when Brian Westbrook was either hurt or not himself.  But he has come back with a vengeance, and Mac Dre’s QB Philip Rivers is playing Kansas City this week.  His other players leave something to be desired and if we can keep his kicker Joe Nedney kicking extra points instead of Field Goals, I should be able to squeak by this week.

Next week would be Legacy of Walsh vs. G.O.A.T. and Rainers vs Portland Bowlblazers.  Legacy of Walsh has Peyton Manning, Deangelo Williams and Calvin Johnson all peaking right now, plus he has Antonio Bryant and Kevin Walter on his bench.  Considering my team of Kurt Warner, Matt Forte, Thomas Jones and Brandon Marshall are all hit or miss (that is not a reference to team Hit Or Miss, they are inconsistent), I think Legacy of Walsh blows me out of the water.  Putting him in the finals.

The next spot is decided between Rainers and Bowlblazers.  Rainers team consists of Tyler Thigpen at QB, Kevin Faulk and Dominic Rhodes at RB (Marshawn Lynch and Deuce McAllister on the bench), Anquan Boldin and Vincent Jackson at WR.  After looking at his team I am not even sure how he made the playoffs.  Unless Anquan Boldin and Vincent Jackson have incredible days next week (which is possible), Bowlblazers makes it into the finals.

The finals would be set for week 17, Legacy of Walsh vs. Portland Bowlblazers.  With Legacy of Walsh peaking at the right time and most of his players still fighting for playoff spots in week 17 he takes away the grand prize and wins Niners Nation 4 the greatest League in all of Niners Nation Fantasy Football. 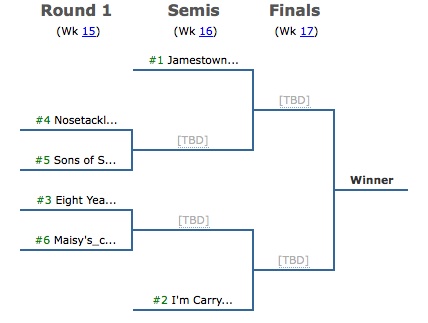 In what has to be one of the most bizarre occurrences I've ever seen in fantasy football, the top 2 seeds had the fewest points among all the playoff teams and yet they won running away.  I'm Carrying Underwood finished 10-4 but was actually outscored over the course of the season.  Both have been fortunate up to this point, but we'll see if their luck holds up in the playoffs.

Sons of Seifert is the hottest team right now, having won 3 straight and put up the second highest point total in the league.  I'm going to go out on a limb and call for the #5 seed Sons of Seifert to run the table and shock the world.