Hey all, James here with today's editon of the Nuggets. So I'd like to start off by saying happy holidays to all of you and I hope you enjoy your Christmas/etc. I know I have so far, seeing as how yesterday I got surpised a bit early with a Patrick Willis jersey, which you know, is waaayyy better than Fooch's lucky jersey. Want to know why? Just follow the jump and you'll see. (In all serious, its pretty rad and Fooch's is awesome regardless and hopefully will bring us lots of luck, also regardless.) Anyway, here's your links for today, there's not a whole lot but the Jeff Ulbrich one made me grin. So happy holidays, enjoy your links, enjoy your gifts, enjoy your... whatever. Just enjoy.

Singletary urges the Niners to think about the Redskins for one hour today on their day off, Hill says he's just about positive every one of them will. (SFGate.com)

Suspending the Rooney Rule for the 49ers so we don't lose Singletary to another team would be an appropriate Christmas gift to the Niners from the NFL. (SFGate.com)

You can expect more on this later, but I'd be doing a shoddy job if I didn't let you guys know--Singletary is even closer to be promoted to head coach for next season. (SFGate.com)

Is Martz going to return next season? Is it up to Singletary? There's a lot to consider. (PressDemocrat.com)

Jeff Ulbrich is a MAN, DAMNIT! Even if he drives a Prius. Ulbrich has been one of my favorite linebackers for years now, props to him for driving that car and not being afraid to show it! (MercuryNews.com)

Barrows says that Singletary is being retained and Martz is not, matter-of-factly. I wonder if his source is real, not thatI  doubt him but how did he crack the maybes? (SacBee.com)

Parys Haralson is moving in on double-digit sacks. Woo..? While not a huge deal, it does give me some hope for a pass rush next season if we can hone his skills. (MercuryNews.com)

K, so why is mine BETTER? Because, silly, its signed! By the man himself, #52, Patrick Willis! Sorry, I'm a bit excited. Its awesome. (Thanks mom?) Seriously though, props to Fooch and his jersey and hopefully we'll have two lucky jerseys (three if you count my brothers, #21 signed by Frank Gore. Both authenticated) to give us the edge next season, no? Anyway, here's a picture or two just because I can. (Watch him have somebody else handle the Nuggets next season. D:) 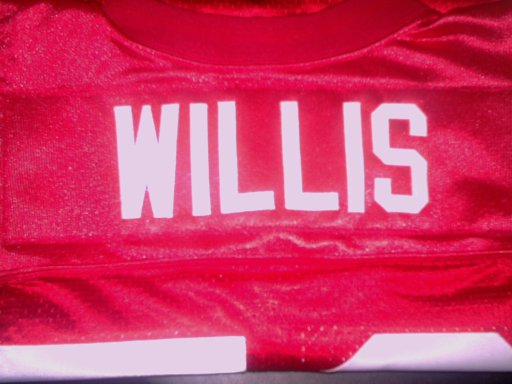 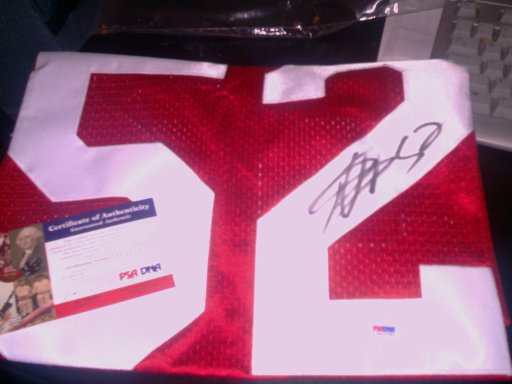