IMPORTANT NOTE: PLEASE READ THIS FOR ALL DETAILS ABOUT THE TWO POST-SEASON PREDICTION GAMES, AND ASK FOR CLARIFICATION ABOUT ANYTHING WHATSOEVER IN THE COMMENTS SECTION. 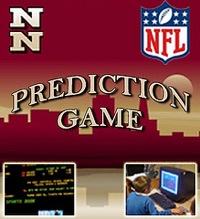 Fooch and I have been corresponding over the last week, and we've worked out how to distribute the prizes. Fooch is breaking it down explicitly for everybody in a comment within this thread. Check it out to learn more.

EVERYBODY CAN PLAY THIS GAME!!! The slate is wiped clean and every player begins the sprint for the playoff crown at zero points. Scoring is identical to the regular season, except that perfect predictions count for 5 instead of 10. In a 4-week competition, spotting somebody 10 points is simply unfair. Other than that, the only change is that I will ask you to provide a tiebreaking prediction during the Super Bowl week only, in which you'll be asked to predict the total net yards for the game.

So, for EVERYBODY WHO WANTS TO PLAY, the games for the upcoming week are:

HEAD-TO-HEAD TOURNAMENT PLAYERS ONLY: When you submit your predictions to Fooch, be sure to make a prediction for the total net yards in the Philadelphia / Minnesota game. This could potentially mean the difference between a win and a loss.

For those playing in the HEAD-TO-HEAD TOURNAMENT, make sure you read past the jump for rules. It's also very important the eight of you consider e-mailing your predictions directly Fooch.

For those eight lucky players who made the head to head tournament, let me remind you who you are:

Now pay attention, because here are the rules:

Now, the scoring is simple enough, but my masterful skills for explaining things have understandably made the tiebreak system sound far more complicated than it is. Believe me, it's VERY SIMPLE, contrary to how I make it sound, and more importantly, IT WORKS. Believe me. But if you have any questions, please ask.