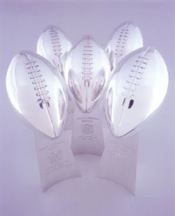 While I do remain annoyed by the whole Scott Linehan situation, I found something else to complain about for now. And given that the Super Bowl is a little over a week away, it's good timing. Over at FoxSports.com they came up with the top 10 best Super Bowl teams ever. Now I realize it's just some person (or group of persons') subjective opinion, but I still find some amusement in the list.

The #1 team is the 1985 Chicago Bears. I'm sure our random Bears fan GeoMak would certainly give this selection two thumbs up (speaking of him, I noticed that over at Turf Show Times he got into a verbal scuffle with Rams fans about Singletary. Good times seeing Bears and Rams fans duking it out).

The '85 Bears were great, but I think some of the 49ers Super Bowl teams would have done some damage to them. The best part about the Top 10 list is that 3 of the top teams are 49ers squads (1984, 1989, 1994). All three of those teams brought different, but equally entertaining, forms of dominance to the table.

So the question becomes, which is your favorite 49ers Super Bowl team? Two years ago ESPN ran a similar feature, although it ranked every Super Bowl team (winners AND losers) and the 49ers fared rather well in that poll. The 1989 squad was voted #1, the 1984 team was 5th and the 1994 squad was 11th.

Looking at the numbers, I continually ask myself if the 1984 team was underrated. A look at the traditional counting stats would indicate probably not, at least compared to the 1989 squad.

In 1984, the 49ers ranked 2nd in offensive points and yards gained. On defense they ranked 1st in points allowed and 10th in yards allowed. They were 1st in total points scored and 4th in total yards.

In 1989, they ranked 1st in offensive points, total points, and yards gained. They were 3rd in points allowed and 4th in yards allowed.

The 1994 squad was ranked 1st in points scored, 2nd in yards gained, 6th in points allowed and 8th in yards allowed. Not too shabby, but a lot of folks tend to rank them behind the 84 and 89 teams.

I've left out the 1981 and 1988 teams because this is more looking at the more dominant teams. However, those two teams certainly have a special place in the hearts of 49ers fans. The 1981 team was the first Super Bowl squad and had The Catch. The 1988 squad had Montana-to-Taylor in one of the greatest finishes to a Super Bowl ever.

So I suppose I have a couple questions. First, of the five Super Bowl seasons, which is the best overall team. I'd have to go with that 1989 team, although I think the 1984 team is a close second. The stats seem to show that. And 55-10 in the Super Bowl is hard to ignore.

Second, which was your favorite Super Bowl game of the five? The 1981 and 1984 games took place when I was 2 and 5 respectively, so I didn't see them. Of the remaining three games, I find it really hard to decide between them. Gun to my head I'd say the 1988 game because of the finish. The 1989 and 2004 games were great because blowouts in the title game can be fun. '89 was an all-time team and '04 had Young getting his ring. But the '88 game was just an all-time classic.

After my dismay last night, I thought something a little more fun was in order. The team may struggle in the present, but there's no denying the past. I'm not wildly concerned about the Steelers ending up with a sixth Lombardi trophy because as has been pointed out before, the 49ers are the only team to be perfect in Super Bowls.