AUTHOR'S NOTE: Sorry about this being a day late. Work was a bear yesterday. Look on the bright side. What you read here will be even fresher in your mind when you watch the game tomorrow.

For those of you who were on Niners Nation last season, you'll find this post - and the weekly ones that follow - very familiar. For those of you who weren't, this weekly matchup post was my main contribution to the site in 2008 (if you're a nerd and/or troll and/or stalker, you can find the archived 2008 articles here). Basically, the way it works is that each week I look at how the 49ers's strengths and weaknesses compare to their oppenents' strengths and weaknesses. However, unlike the more subjective key-matchups-style posts you see around the internet and on TV, my matchup analyses are strictly from an objective, statistical perspective (shocking, I know!)

The purpose of these matchup posts isn't so much to predict the game outcomes as much as it is to focus your attention during each game on a select group of important, although likely overlooked, situations. For instance, I bet that in almost no game previews will you be reading or hearing about how the 49ers' OL is ranked 29th when blocking in the OFF's favorite run direction (i.e., up the middle), whereas the Packers' DL is ranked 8th when defending such runs. Obviously, that's kind of important to know when you consider the 49ers run the ball up the middle 73% of the time! Think that matchup is going to have an impact on the game? Um...duh!

Now, obviously, I can't present every single matchup for which DVOA ratings exist. You think my other posts are dissertations? If I were to present every DVOA matchup possible, this post would be more like War and Peace than a dissertation. Therefore, I have to pare down the matchups to include only those that I think are most important.

How do I do that? Well, basically, I'm of the view that the primary goals of every team in every game are to (a) do what they're good at, and (b) prevent their opponent from doing what their opponent is good at. Mike Singletary calls this "imposing your will" on the opponent, and it's something that, from my sport psychology background, I whole-heartedly believe. So, to me, the key matchups are the ones that involve each team's strengths, and the most important matchups of all involve situations in which one team's strengths are matched up against their opponents' weaknesses. These strength vs. weakness matchups are the ones I'll be presenting in this post, and the ones that will follow for the remainder of the season.

After the jump, it's the key matchups, and I don't mean the "Key Matchups," i.e., how VD's pocket square "matches up" with his fuchsia socks...

One good thing to look at before every game is how each team has been playing lately. As this relates to the 49ers and Packers, the trajectories of their respective seasons have actually been quite similar. There's one matchup, however, in which the two teams are going in opposite directions. Here's a chart showing the game-by-game DVOA trend for two units that will be opposing each other on the field this Sunday: 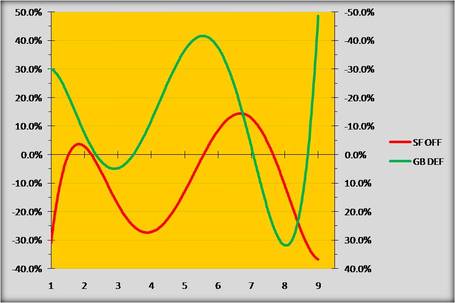 FYI...the Niners' OFF DVOA trend uses the left axis, while the Packers' DEF DVOA trend uses the right axis. As you can see from the chart, the GB DEF is currently getting more efficient, whereas the SF OFF is getting less efficient. Obviously, this is really just showing that the Niners' OFF couldn't do diddly against CHI's DEF in Week 10, whereas the Packers' DEF shut down a potent DAL offense. Still, it's not a trivial matter. GB's DEF will likely come down to earth somewhat, but they'd have to crash with a serious thud for that decline to have a meaningful impact on the SF OFF, which has a long way to dig out of its own grave.

There's no doubt that teams don't want to get themselves in 3rd-and-long situations when they're on OFF. However, the hope is that, if they are in such situations, they either (a) are actually pretty good at converting the 1st down, or (b) find themselves playing against a DEF that sucks on 3rd and long.

The underlying problem for the 49ers in their 3rd-and-long matchup this week is that 3rd and long is a passing-heavy situation, and 3rd-down passing doesn't present a favorable matchup either. Specifically, SF has the 25th-ranked 3rd-Down Pass OFF DVOA (-11.3%), whereas GB has the 2nd-best 3rd-Down Pass DEF DVOA (-38.5%). So, the moral of the story here is that, when you're watching the game on Sunday, pay attention to how often the Niners' OFF ends up in 3rd and long. Not often = good. Often = bad.

As I've been pointing out all season, the Niners' OFF is not a good unit coming out of the locker room. Whether due to an inept game plan, a lack of motivation, or still thinking about who won the pregame fashion contest (probably VD), the SF OFF can't seem to get an early lead on the competition. In some games (e.g., vs. STL), this doesn't end up hurting them; but in others (e.g., @ HOU), it puts them in an insurmountable hole.

If they were to pick a week to finally play well in the 1st quarter, let's hope this week is it because their matchup with the Packers is - to put it kindly - a tad unfavorable. Specifically, the 49ers' 1st-Quarter OFF DVOA is an atrocious -43.7%, which ranks them 30th in the league. In contrast, the Packers' 1st-Quarter DEF DVOA is a stout -17.2%, good for 5th-best in the NFL. So, when you watch the game on Sunday, pay attention to how the Niners' OFF fares in the 1st quarter. Good = great; OK = good; Bad = click below:

By now, you're well aware that the Niners' OL sucks. However, as it relates to the GB game, it's not so much that they suck as it is the particular situations and run directions in which they suck. That's because, although their overall matchup against GB's defensive front 7 is unfavorable, the devil is actually in the details. Here's a chart showing stats for the two areas in which the 49ers must overcome their disadvantage to have any kind of shot at looking like an NFL offense this weekend (bold = top 8 in the NFL; italics = bottom 8):

As you'll recall, Stuffed % tells you how often a team's running plays end up with 0 yards or fewer. Therefore, the table shows that Niner RBs end up with zero or negative yardage on 25% of their carries, whereas the Packers' defensive front 7 stops opposing RBs for zero or negative yards on 26% of their carries. You think you've seen a lot of 49er runs for no gain this season? Just wait until Sunday. The SF OL must overcome this disadvantage in order to run the ball well this weekend.

What makes the OL's matchup a double-whammy is that all of those 0-yard runs we've seen this season have been of the up-the-middle variety, which is exactly the run direction in which (a) the 49ers' OFF is a frequent visitor, and (b) the Packers' DEF considers a no trespassing zone. Indeed, an unbelievable 73% of Niner running plays go up the middle, which ties them with the Jaguars for #1 in the NFL. And the next-highest frequency? That would be the offensive juggernaut known as the Cleveland Browns (69%). After the Big 3, only 2 other teams even reach the 60% threshold when it comes to being stuck in the middle (Patriots = 62% & Buccaneers = 61%).

So I think my point here is pretty clear. The Niners' OFF loves running the ball up the middle even though they suck at it, which leads to a lot of carries for zero or negative yardage. Meanwhile, the Packers' defensive front 7 is great at stopping runs up the middle and preventing the RB from getting back to the line of scrimmage. This is not a good combination for Jimmy Raye's run offense philosophy; nor is it a good combination for the OL's (lack of) blocking prowess.

Up until now, all of the strength vs. weakness matchups have been unfavorable to the 49ers. So, here's a favorable matchup to lift your spirits.

Of course, it's a little more difficult for a defensive front 7 to "impose its will" in a specific direction. It's not like (a) the Packers are unaware that SF stops left-end runs really well; or (b) the 49ers can force the Packers - in any meaningfuly way - to run towards left end. Nevertheless, the fact of the matter is that GB has run the ball frequently in that direction during their first 9 games. If you're still not satisfied, though, it's also important to point out that the matchup is pretty much the same on GB runs behind LT. Specifically, GB runs the ball 15% of the time - actually 1 of the 10 highest frequencies in the NFL - in that direction, GB's OL doesn't block well in that direction (LE ALY = 3.44 ypc, 23rd), and SF's defensive front 7 stops runs really well in that direction (LE ALY = 3.48 ypc, 6th).

So, it really seems like the Niners' defensive front 7 has an advantage when GB runs to the left side of the formation. Let's hope they choose to run there as often as they have in their previous 9 games.

Although Greg Jennings is technically GB's #1 WR, Donald Driver has actually been the better option this season -- much to my fantasy team's dismay. Driver's DVOA of 23.7% ranks him 13th among WRs, whereas Jennings' -0.6% DVOA ranks him 38th. Because DVOA is a measure of efficiency, and because Driver and Jennings get thrown the ball equally frequently (Driver targets = 65; Jennings targets = 68), Driver is more dangerous for the 49ers because his targets and catches have been more productive in crucial game situations. With that said, SF might just be the team to slow him down: their -33.9% DVOA against #2 WRs is good for 3rd-best in the league. So when you watch the game on Sunday, pay attention to how well the Niners' pass DEF (a) prevents Driver from being the target of a pass, and (b) prevents Driver from being productive when he is the target of a pass.

Remember, my new posting schedule begins next week. First up on Wednesday is a post evaluating how the Niners played against the Packers according to Singletary's Formula for Success.

*DVOA and ALY statistics used to produce this article were obtained from Football Outsiders.