Football Outsiders and the 49ers: Team Stats through Week 11

Share All sharing options for: Football Outsiders and the 49ers: Team Stats through Week 11

Welcome back for another installment of my weekly look at the 49ers' team stats and rankings according to Football Outsiders' DVOA stat.* As I stated last week, part of the impetus for my new schedule was that my posts tend to be - and this is putting it mildly - on the longish side. So, some of you will be happy to see that this team stats post will be much shorter than it used to be. Basically, I've taken some info that I used to present here (e.g., TOT, OFF, DEF, & ST DVOA), and moved it to other posts during the week.

The fortunate byproduct of moving so many stats to other posts is that I can add in a couple of new stats here, and still have this post be shorter than it used to be. The new DVOA stats I'll be presenting in this post are

In addition to these 2 stats, I'll be providing some pretty charts that show you the 49ers' Game-by-Game DVOAs on OFF and DEF over the course of the season thus far.

Housekeeping done. Time for the party.

Here' how the offensive rankings look overall and by type of play (bold = top 8 in the NFL; italics = bottom 8):

If you've been reading these posts all season, you'll notice something absolutely astounding. Namely, the 49ers' OFF is no longer ranked 25th or worse (aka in the bottom 8) in any of the above categories. In terms of their overall OFF DVOA, they've risen 4 spots and 5.5% since the bye week. You might ask, "Why?"

After the jump, I'll show you why, and then present the rest of the stats through Week 11...

To figure out why the Niners' OFF has improved to the degree that it has, check out the first of my new charts, which displays the smoothed-out trend for SF's Game-by-Game OFF, Pass OFF, and Rush OFF DVOA: 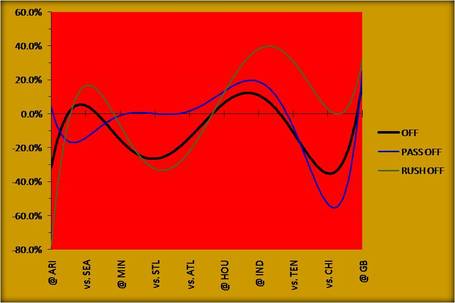 What this chart shows is pretty darn interesting, if you ask me. Basically, the OFF overall has been getting better ever since Alex Smith was elevated to starting QB (i.e., since the Falcons game). However, you'd think that it's been the pass OFF acting as the catalyst. Well, although it's true that - except for the Titans and Bears games - the pass OFF has generally been on the positive side of game DVOA, the rush OFF trend has yet to dip below 0.0% since Smith took over. So, my conclusion here, which I'm pretty sure I made last week, is that the biggest beneficiary of Alex Smith starting has not been Vernon Davis or Michael Crabtree; rather, it's been Frank Gore.

The reason for this counterintuitive effect seems plainly obvious. I've been giving you guys Shotgun vs. Non-Shotgun DVOA for weeks. With the abridging of this post, I've decided to drop them in general. However, because Smith starting has coincided with more shotgun, I'll give them to you one more time this week, except I'll show you what they are now as compared to what they were after the ATL game:

From this table, you can clearly see that, since Smith became the starter, the Niners' OFF has (a) become a much more shotgun-heavy unit, and (b) has become a much better shotgun unit. And again, based on game-by-game DVOA, Gore and the rush OFF has improved more over this time than the pass OFF. Therefore, it's pretty obvious that a major reason why the 49ers' rush OFF has gotten so much better is that they're using more shotgun.

In my view, the basic phenomenon at play here is that the shotgun is a passing formation, so opposing DEF's are either in a base DEF with only 7 men in the box, or their in a nickel DEF with only 6 men in the box. In other words, when the Niners' OFF lines up in shotgun, it prevents their opponent from committing 8 or 9 defenders to stopping the run. Given that the 49ers' OL is so bad at run-blocking, having a numbers advantage in the shotgun formation has essentially taken a team weakness and turned into a team strength.

As much as it makes me cringe to do this, I have to give kudos to Jimmy Raye for realizing this and working it into the game plan. To me, it's clearly the right thing to do from a strategic perspective. What frosts my rear end, however, is when any mention of even more shotgun seems to imply to the coaches that doing so will either prevent offensive balance or get them away from being the run-oriented OFF they so desperately want to be. As you can see from the stats I've just presented, this is unadulterated hogwash. The 49ers can just as easily have a run-oriented OFF out of the shotgun as they can have a multi-WR "spread" offense out of the shotgun. Furthermore, they don't have to sacrifice balance either. If anything, using more shotgun gives them a better chance of remaining a balanced OFF because having the threat of either running and passing - which the shotgun seems to have resulted in - will give them the flexibility of being able to call a run play or pass play at any given time, and the opposing DEF not being so certain about which is coming.

The last time I gave you these stats was after Week 7. A lot has changed since then, again mostly due to Smith's elevation to the starting QB role. First, the 49ers' OFF is now 13.9% worse overall on 1st down, with the pass OFF being 33.6% worse, but the rush OFF being 7.6% better. So, once more we see that more shotgun equals better running because, in my mind, opposing DEF's aren't stacking the box with 8 or 9 guys absolutely certain that the Niners are going to run up the middle on first down.

Further evidence of this "we're not telegraphing our plays" idea is the change from Week 7 in 3rd-down OFF. Specifically, the 49ers' OFF is 1.6% better overall, with the pass OFF being 10.9% worse, but the rush OFF being 41.8% better. Again, strategy is the key. The presence of an actual passing threat on 3rd down - via the emergence of a successful shotgun OFF overall - prevents the DEF from keeping all of their defenders (esp. their Ss) within 10 yards of the line, and this numbers advantage allows the running game to be successful on 3rd down.

I hope you're following my logic here. If you don't here's my reasoning in a nutshell:

Chew that one for a minute along with your Thanksgiving leftovers.

This is almost anti-climactic given what I've focused on so far, so I'll make it short. Here's how the OFF plays at home and on the road (bold = top 8 in the NFL; italics = bottom 8):

In this table, the Difference stat assumes that teams play better at home. Therefore, the table shows that the Niners' OFF plays over 15% better on the road than they do in Candlestick. Given their truly "offensive" performances at home vs. ATL, TEN, and CHI, this should come as no surprise. It's still interesting though, and makes me wonder why they suck so badly on OFF at home.

As I mentioned in the Formula for Success post yesterday, FO considers a game to be "close" when neither team has an 8-point lead or greater. Therefore, DVOA can be split into plays that occur while a team is losing big (i.e., by 8 or more), tied or losing small (i.e., by less than 8), winning small (i.e., by less than 8), and winning big (i.e., by 8 or more). Here are the score-gap splits for the 49ers' OFF (bold = top 8 in the NFL; italics = bottom 8):

If you've been following the discussion this week on NN, you know exactly what I'm going to say here. Namely, the stats totally back up my argument. Similar to what Bill Walsh once said about Steve DeBerg, the Niners' OFF plays "just good enough to get you beat." When they're losing, they play balls to the wall until they get the game close, then can't finish the comeback. When they're winning, they totally take their foot of the pedal, and try to coast home for victory. The most enraging part of this table for me is their DVOA when winning big. As I've said before, being up by 8 or more before the 4th quarter is not a reason to simply shut down your OFF and expect to kill the last 20+ minutes of clock. For this year's Niner OFF, that's exactly what happens. Put the DVOA-while-losing and DVOA-while-winning ingredients together, and you have yourself the recipe for "5 losses by 7 points or less."

Here' how the defensive rankings look overall and by type of play (bold = top 8 in the NFL; italics = bottom 8): 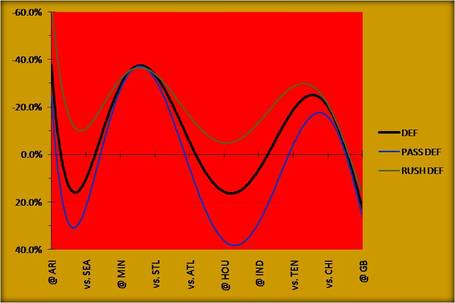 Two things. First, notice that the range in performance for the Niners' DEF is 40% narrower than for the OFF (See OFF's chart above). Second, unlike the case with offensive units, the pass DEF and rush DEF seem to ebb and flow in unison, with their overall DEF DVOA always remaining somewhere in between the two.

Only thing to mention here is that the 49ers' 3rd-down DEF has improved 22.7% and moved up 9 spots in the rankings since Week 7, mainly because their 3rd-down pass DEF has gotten 29.3% better.

Pretty straightforward here. The Niners DEF plays better at home - shocker I know - and their home/road difference is near the top of the league.

Two things. First, the spread is a lot more uniform here, i.e., the Niners' DEF isn't systematically horrible in one score gap situation, but great in the opposite situation. Second, totally unlike the OFF, the DEF actually plays most efficiently when they're tied or down by 7 or less. In other words, when it comes to the 49ers completing comebacks, blame the OFF for failing to take the lead, not the DEF for failing to hold the game where it is.

I know that was a little longer than I anticipated, but I explained some things here that I won't be explaining in the future, and I kind of went on a little rant there in the OFF sections.

OK, so through 10 games, we can draw the following conclusions about the 2009 49ers: