AUTHOR'S NOTE: Per Fooch, just wanted to give everyone a heads up that today's game thread will be going up at 3 p.m. EST/12:00 p.m. PST.

It's game day, and, after looking at the stats throughout the course of this week, I feel a lot better about a 49er victory today than I did last Sunday. Time's a wasting, so let's get this pregame show on the road.

Last week, I showed you how the 49ers' OFF and Packers' DEF were going in divergent directions, and how that wasn't a good sign for our favorite team. Well, this week, basically the opposite is true. Here's a chart showing the game-by-game DVOA trend for two units that will be opposing each other on the field this Sunday: 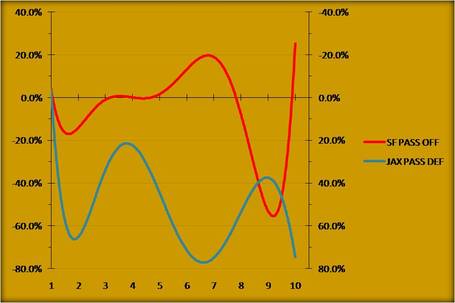 As is pretty clear here, the Niners' pass OFF and the Jags' pass DEF are on diverging paths right now, and have been going in different directions over the course of the season. The pass OFF has a real opportunity to take advantage of an incredibly weak unit on the other side of the field.

After the jump, I'll present another offensive trend that's good for the 49ers, as well as a few more matchups that, overall, bode well for today's game...

Another offensive trend worth noting - and this is something I like to pay attention to when picking games - is what a Jaguar win looks like. In other words, do JAX's wins look different statistically than their losses? It turns out, they do. Here's a chart showing how the Jaguars' offensive performance has differed from its defensive performance in wins and losses (i.e., JAX OFF DVOA minus JAX DEF DVOA): 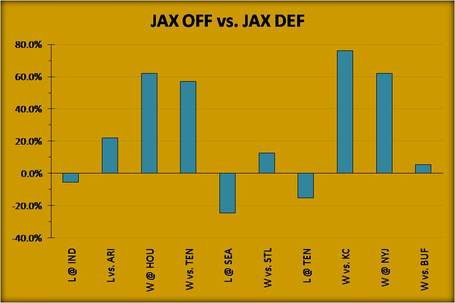 This is the first of two team matchups where one team has a strength vs. weakness advantage on both OFF and DEF. In this case, it's the 49ers who benefit. Specifically, when the 49ers enter the red zone on OFF, they'll have a 111.8% DVOA advantage if they pass the ball against JAX's DEF. Similarly, when the Jaguars enter the red zone on OFF, the 49ers' DEF will have a 156.6% advantage if JAX passes the ball. So basically, the red zone game plan for the Niners today should be pass, pass, pass, while the defensive game plan should be doing whatever they can to get the Jaguars' OFF in passing downs if/when they reach the red zone.

Unfortunately, the Jaguars have a situational matchup advantage on both sides of the ball too. It's when either they run the ball on 3rd/4th down with less than 3 yards to gain for a 1st down or when the Niners run the ball when they're in that situation. The stats here are pretty convincing. JAX's OFF is #3 in the NFL in this situation, converting a first down 73.7% of the time, while SF's DEF is #30, giving up a 1st down a whopping 78.3% of the time. Similarly, when the Niners are on OFF, they're ranked 24th with a conversion rate of only 56.2% on short-yardage 3rd/4th down runs, while the Jags' DEF is #9, giving up a 1st down only 59.1% of the time. So what we want to see from the 49ers in today's game is passing on 3rd and short when they're on OFF, and keeping JAX out of 3rd-and-short situations when the Jags are on OFF.

You might notice there's a theme in today's game: the 49ers need to release the hounds and pass the ball continuously on OFF. One player who has a really good matchup against the Jaguars' pass DEF is Frank Gore. Namely, Gore has the 6th-best Receiving DVOA among RBs (29.6%), whereas JAX's DEF is ranked 26th in the NFL (20.9%) when it comes to defending RBs in the passing game.

So, what we want to see, obviously, is the 49ers' OFF utilizing Gore's receiving skills as frequently as possible. Based on what I said earlier in my player rankings post, this strategy would have the added effect of avoiding "Gore up the middle for no gain." In essence, what I'm calling for here is - gasp - something that resembles Bill Walsh's utilization of Roger Craig.

Amazingly, that's pretty much the extent of all top-8 vs. bottom-8 matchups in today's game. However, before I finish, I'd just like to present a few stats that I think are important given what I've repeatedly diagnosed as the 49ers' main problems.

First, given that the Niners' OFF kills themselves with horrible 1st-quarter performances, how good/bad is the Jaguars' DEF in the 1st quarter? Answer: Their 1st-Quarter DEF DVOA is -3.8%, which ranks 11th in the NFL. So, basically, SF might once again have difficulty getting off a good start on OFF.

Finally - and this might be the best thing I've told you so far - given that SF's OFF has been using more shotgun since Alex Smith became the starter, and are clearly better when they're in the shotgun, how good/bad is the Jags' DEF when the opposing OFF lines up in shotgun? Answer: They're ranked dead last in the league in Shotgun DEF DVOA (42.2%), and are also ranked dead last in terms of the difference between Shotgun and Non-Shotgun DVOA (41.0%). So, basically, Jimmy Raye might want to consider using the shotgun just a tad.

Based on the statistical matchups, here are the plainly obvious keys to a 49er victory on Sunday:

I'll see you back here on Tuesday with my matchup review. GO NINERS!

p.s. So help me God, if the Niners don't throw the ball out of shotgun at least 40 times in this game, I'm going to send my resume to team headquarters and request to replace the most inept OC since Jim Hostler.