Fooch's Note: The link at the end is to a Matt Barrows article. TO basically has said he'd certainly be intrigued about the idea of ending his career with the 49ers (in a playing role, not just a ceremonial 10-day contract). My stance on TO has softened quite a bit over the last few years. Given the fact that Mike Singletary doesn't take guff from players I'd certainly be intrigued by the possibility. This is all assuming that he's not just throwing some BS out there to get a little buzz. At the same time, with Vernon Davis taking his game to the next level and Michael Crabtree showing he's legit, is there any room for a TO? You've got Josh Morgan continuing to develop. And if you think Brandon Jones will get more playing time next year and Jason Hill emerge a little bit more, do you really want to stunt that growth? At the same time, although TO has struggled this year, he's shown flashes in recent weeks of the skills that have made him so great. I know some folks still hate him, but if you can put the hate aside for a moment, do the 49ers make this kind of move for a 1- or 2-year contract?

TO is making noises like he wants to be back in San Francisco to finish up his career. We all know his history with the team, and his leaving left a bitter taste in many fan's mouths. He managed to run himself out of Philly, and then got run out of Dallas (I don't think he was ever the problem there). 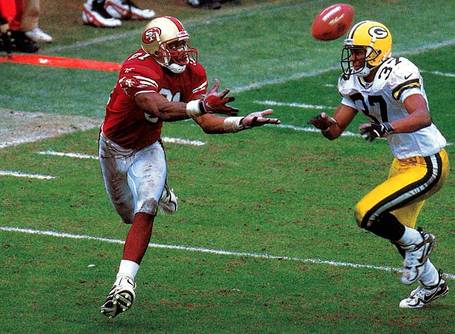 However, he's been much more restrained in Buffalo, despite having one of his worst seasons ever. He signed a one-year deal with Buffalo ($6.5 million, $4 million of it guaranteed).

Relevant quotes from the article

"Maybe to remove the curse, they have to put me back in that uniform," he said, only half-joking, from Buffalo, where he noted he had signed a one-year deal.

Last week, however, Owens had softened his stance and sounded nostalgic about his time with the 49ers. He credited Jerry Rice and former receivers coaches Larry Kirksey and George Stewart for helping mold the ambitious but raw wide receiver who arrived from Tennessee-Chattanooga in 1996.

"Along with Jerry Rice, those two guys alone have been so instrumental in what I've become today," Owens said. "No one seems to know that or give them the credit, and I put in a lot of hard work. But without those two guys coaching me, striving and instilling in me the things that it takes to be successful, I wouldn't be where I am today."

Owens also said he would be open to finishing his NFL career in the city where it began. He recently said he would like to play at least two more seasons.

"I wouldn't want to go back just to, you know, put on a uniform just to end my career there," he said. "If I came back, I know I'm capable of playing this game at a high level. I would be instrumental and would want to be instrumental in whatever they're trying to strive to do in that organization."

I would be excited to see TO in red and gold again, especially if we could do it at a reasonable price. We paid Isaac Bruce $1.5 million this year in base salary. Bruce's stats for the last three years:

In my view TO has been much more productive than Isaac Bruce. I'd be willing for the team to pay him $2 million a year and load his contract with incentives. This would give us VD, Crabtree, Owens, and Morgan as receiving threats. We could have Morgan focus on PR/KR. Defenses could never cover us with their base packages, as it would create nightmare scenarios for them.

Here's the link to the article in case anyone wants to read the whole thing.

Would you like to see TO play for the Niners next year?