AUTHOR'S NOTE: Sorry for no team and player rankings posts this past week. I've been working on a special article that will appear on NN in a few hours. For now, here's the matchup preview to prep you for tonight's game.

This one's going to be short and sweet, everyone. Beating the Cardinals isn't rocket science (See "Pass, Defend the"), so - not surprisingly - most of the important statistical matchups are not rocket science either. What made this matchup analysis a tad difficult is that there are several pass-defending game situations in which both the Cardinals' OFF and the 49ers' DEF are really good. So this game might end up coming down to a few strength vs. strength matchups rather than the strength vs. weakness matchups I typically present in the preview post.

In a file-under-"Duh" moment, this week's "opponent wins when they have performance X" matchup has to do with the ARI pass OFF. Here's a chart showing their game performances thus far this season: 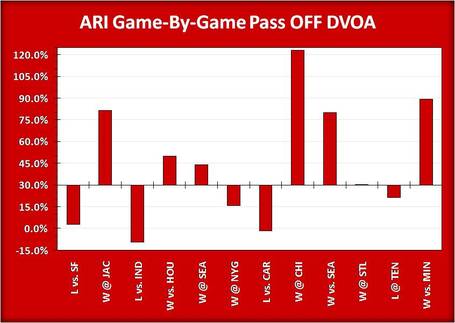 Aside from one exception, the Cardinals' wins and losses this season have depended on a Pass OFF DVOA for the game of 30.0%. If they're over that threshold, they're 7-0; under that threshold, and their 1-4. However, as I said, we don't really need statistics to tell us that slowing down ARI's pass OFF gives the 49ers' the best chance of winning this week's game. But, it's not just the win/loss trend that matters...

You know I like to focus my attention on strength vs. weakness matchups. However, the passing game is so important for ARI that I feel it's important to judge how likely it is that the Niners' DEF will be able to prevent ARI from doing what they want to do in the passing game.

The Cardinals have the 8th-best Pass OFF DVOA in the NFL going into Monday's game, so they're obviously great in a general sense. However, there are two specific offensive areas that make ARI especially dangerous: (a) red zone passing, (b) pass protection; both of which offer the 49ers' an opportunity to nullify an ARI strength.

With regard to red zone passing, ARI is #3 in the league on OFF (DVOA = 55.4%). Nevertheless, the 49ers's DEF is the top-ranked team in the NFL when it comes to Red Zone Pass DEF DVOA (-97.1%). So, it'll be interesting to see which unit - the Cardinals' pass OFF or the 49ers' pass DEF - ends up having the upper hand when Kurt Warner and company pass the ball in the red zone.

Another reason ARI's pass OFF is so dangerous is because their OL is stingy when it comes to allowing sacks. Specifically, the Cardinals' OL ASR is 4.5%, which is good for 6th-highest in the NFL. Fortunately, for our beloved team, the 49ers are ranked 7th in defensive front 7 (DF7) ASR.

So, to recap, it's obvious that the Cardinals' pass OFF is the straw that stirs their drink. Two key areas in which they're particularly good are in the red zone and in pass protection. It turns out that these two areas are actually defensive strengths for the 49ers: they're among the top 8 in defending them. Therefore, what we have here is the proverbial "irresistible force meets an immovable object" matchup. A Niner victory tonight might depend on their ability to remain "immovable."

Each of the past 2 weeks, I've advocated a Niner OFF that passes the ball early and often. Against the Jaguars and Seahawks, my advocacy was based on each of these teams being horrible in pass DEF. This week, the statistical matchup against ARI once again suggests a pass-heavy OFF, but for a different reason: it's highly unlikely that SF will be able to run the ball effectively against ARI. Here's a handy table that, I think, succinctly illustrates this point (bold = top 8; italics = bottom 8):

How's that for an argument against trying to run the ball against ARI? If I had to pin down the most damning evidence in the table, it would have to be the Niners' disadvantageous matchups in C/G and RT ALY. Taken together, these two run directions have comprised 83% of all Niner RB carries this season, which means that ARI's DF7 is best where SF runs most. I don't know about you, but it's kind of the definition of "bad strategy" to implement a tactic that's likely to fail - and miserably so - 4 out of every 5 times you do it. Therefore, "good strategy" would be to avoid this disadvantageous matchup as much as possible. In other words, now is not the time to overreact to the SEA loss; keep passing the ball, please.

By now, it's apparent that the 49ers' pass OFF goes through Vernon Davis. Nevertheless, here's one more stab at it: VD's 101 targets this season are nearly twice as many as the 49ers' most-targeted WR (Josh Morgan, 59). So, when thinking about what the Niners want to do on OFF, "getting the ball to VD" seems to be tops on the list.

Luckily, for the Niners, the Cardinals' DEF is ranked 23rd in DVOA vs. TEs (18.6%), and give up an average of 7.4 yards per TE target (ranked 21st). Obviously, the Niners are going to pass the ball to VD regardless of the matchup, but these stats suggest they have a real opportunity to be especially successful doing so against ARI. Equally obvious is the conclusion that exploiting this matchup is going to have a big impact on whether the 49ers come out of tonight's game with a win.

Although he's behind Morgan in total targets this season (56 vs. 59), Michael Crabtree is only slightly behind VD in targets per game (8.0 vs. 8.4), meaning that Crabtree's the 2nd-most-involved pass catcher on the team. So, though it's a little less obvious, the 49ers' pass OFF heavily involves Crabs.

And as was the case with VD's matchup against ARI's pass DEF, Crabtree's matchup is favorable to the 49ers. That's because the Cardinals are ranked 30th in DEF DVOA vs. #1 WRs (24.2%), and they give up an average of 9.0 yards per #1-WR target (ranked 26th). So, if the Niners can exploit this matchup, we might get to witness a break out of Crabs tonight. To boot, when combined with VD's matchup, December 14, 2009, might be remembered as the day that The Tainted Twosome spread across the nation...if the Niners can win thanks to their matchup advantages.

It's been a while, so you may not remember that Tim Hightower had 12 catches for 121 yards in the 49ers' Week 1 win over the Cardinals. Add on 2 incomplete Warner passes that were intended for Hightower, and you find that about 30% of ARI's pass OFF in that game went through their pass-catching RB extraordinaire.

This ARI strategy against the SF pass DEF will probably continue in tonight's game because of something you're far likelier to remember: The 49ers have been getting shredded all season by screens, checkdowns, and dumpoffs to RBs. In terms of DVOA, the Niners' pass DEF is the 6th-worst in the league at defending RBs in the passing game.

Given that the Niners won the first ARI game despite Hightower's prolific receiving day, you might think that this matchup won't have a big impact on winning this game. However, I'll offer a word of caution.

The Week 14 San Francisco 49ers are not the same team that they were in Week 1, and neither are the Week 14 Arizona Cardinals. The formula for beating ARI in Week 1 - DEF and chewing up clock - fit perfectly with what SF was back then. Similarly, ARI's early-season sleepwalking on OFF - they had 2 negative OFF DVOAs in their first 3 games - gave SF a perfect opportunity to implement said winning formula. Since then, the Niners' OFF has - to its benefit - become a more pass-heavy unit, and the Cardinals' OFF has returned to its 2008 form with 9 straight above-average DVOA performances.

So, my point here is that, whereas the first game - as reflected by the 36 total points that were scored - played right into the 49ers' hands, the second game looks to be a high-scoring, gun-slinging affair. If that happens, then heavy involvement by Hightower in ARI's passing attack will play a bigger role in the game's outcome.

My biggest fear in this game is that ends up being like the late-blooming kid who gets beat up by the bigger kid in middle school. If the fight happens a few years down the road, when the kids are the same size, maybe the late-bloomer wins; but, in middle school, the big kid's got the advantage. Similarly, if tonight's game turns into a shootout, ARI's the big kid right now, while the Niners are the late-bloomers. Maybe next season, SF's pass OFF is on par with ARI's, and a shootout is a fair fight. In Week 14 of 2009, however, that kind of game pits men (ARI pass OFF) against boys (SF pass OFF).

SF OFF while winning vs. ARI DEF while losing...Not that any of us are expecting a Niner blowout victory, but ARI's DEF presents a bad matchup for the 49ers' "lose from ahead" OFF. Although they've gotten better the past couple of weeks, they're Winning Big OFF DVOA of -26.7% is still ranked only 29th, while ARI's Losing Big DEF DVOA is a 10th-ranked -11.8%. So, if the Niners do jump out to a lead of 8 or more points, don't expect it to last very long.

SF Shotgun OFF vs. SEA Shotgun DEF...Here's one final reason why I don't like the Niners chances in a shootout: ARI's DEF has already faced a whole heck of a lot of shotgun this season (41.7% of all defensive snaps, 7th-most), and they're pretty decent at defending it (Shotgun DEF DVOA = 4.3%, 13th). Considering how the Jaguars' DEF was ranked dead last against the shotgun and the Seahawks' DEF was ranked 27th, this game is going to be the toughest test yet of the 49ers' new-fangled "Danny-Gun" OFF.

Also, as I've mentioned before, one of the benefits of more shotgun is that the Niners' OL pass-blocks better. Unfortunately, ARI's current ASR ranking (5th) is considerably higher than either JAX's (31st) or SEA's (19th) was when the 49ers played them. So, again, this game presents an opportunity for SF's OFF to show that "more shotgun" works against a real NFL DEF.

*DVOA & ALY statistics used to produce this article were obtained from Football Outsiders.