AUTHOR'S NOTE: If you missed my Formula for Success post, you can read it here.

I have to admit. When I sat down to analyze the statistical matchups for today's game, I figured that it would be a really depressing next few hours. I totally thought that this game was going to be overrun by PHI strengths matched up against SF weaknesses. I thought the stats would tell me this game is going to be the Niners' proverbial east-coast blowout. Thankfully for my psyche, I was pleasantly surprised. It turns out that the Eagles game isn't a lost cause after all. That's not to say the matchups are in favor of the Niners. It just means that we might not have to sit through another 42-3 vomit-fest. First good sign: Mother Nature.

There's a bevy of key matchups today, so no sense in wasting any more time...

This one might surprise you a little bit. I know it sure surprised me. Here's a chart showing the game performances for one Eagles team unit thus far this season: 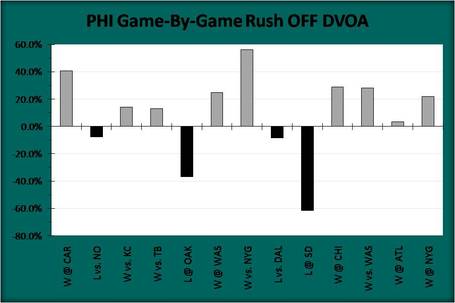 Given that the Eagles are known as a team that passes the ball a lot more than is typical for the NFL, I never thought that it would be their rush OFF that seems to dictate wins and losses. From the chart, the trend is clear. When the Eagles have an above-average Rush OFF DVOA for the game, they're 9-0; when it's below average, they're 0-4. Since I've been putting these charts together, this is the most clear-cut trend I've found for any 49er opponent. So, as this Eagles trend relates to what the 49ers need to do to win the game, one important place to start is obviously stopping LeSean McCoy and company in the running game.

What makes this matchup, shall we say, veeeeeeery interesting is that, as you all know by now, the 49ers' DEF is one of the best in the NFL. It turns out that, in several rush-related stats, this key matchup is another example of an irresistible force meeting an immovable object. Specifically, whereas the Eagles Rush OFF DVOA is ranked 7th in the league (13.1%), the 49ers' Rush DEF DVOA is ranked 5th (-15.3%). Furthermore, PHI has the #8 OL ALY in the NFL (4.25 OL ypc), but SF's defensive front 7 (DF7) also has the 8th-best ALY (3.73). And when you consider that PHI is a left-side running team (7th-highest % of RB carries to the left side), the matchup is again strength vs. strength (PHI OL LT ALY = 5.21 ypc, 4th; SF DF7 LT ALY = 3.14, 3rd). Taken together, these stats suggest that Eagles need to run the ball efficiently to win, but this plays right into the 49ers' stout run-stopping hands. Throw in the freezing temperature at game time, and we might just have a game that's a lot closer than people expect.

After the jump, more stats showing the 49ers' recipe for an unexpected stay-in-the-playoff-hunt victory against PHI...

The Eagles aren't the only ones who will have to win a battle of the trenches in order to win the game; the Niners will too. However, for SF's OFF, it'll be an uphill battle. That's because PHI's DF7 has a nearly across-the-board statistical advantage against SF's much-maligned OL. Here are the relevant stats:

So, all in all, SF's OL needs to outperform this matchup - just like they did against the Cardinals - in order for the 49ers to come out of Philly with a win. Well, more accurately, winning the game necessitates either the OL winning in the trenches or Frank Gore overcoming an OL loss in the trenches.

This matchup represents another episode of When 2nd-Down Pass Defenses Attack! Specifically, the 49ers' pass OFF has a ridiculously bad matchup in 2nd-down passing situations, so the key for SF is to perform efficiently on 1st down, and thereby avoid being prey to PHI's predator. The bone-crushing, flesh-eating details are as follows:

The picture painted by these stats is that PHI's pass DEF is the best in the league on 2nd down, and, because their opponents tend to be in passing situations on 2nd & Long, their DEF is the best in the NFL on 2nd down overall. The converse is true for the 49ers' OFF. They're often in 2nd & Long - thank you "Gore up-the-middle for no gain" - and therefore pass the ball a lot on 2nd down, with this specific inefficiency adversely affecting their overall 2nd-down performance stats. So, if the 49ers are going to win this game, a key contribution must be made by their 1st-down OFF: Don't put yourselves in 2nd & Long!

Think back to the Niners' last road game, which was against the Seahawks. What do you remember from the early part of that game? I seem to recall that they had an unfortunate - albeit officiating-induced - 0-point trip into SEA's red zone. Well, against PHI, this simply cannot happen if the 49ers are going to win. That's because PHI has somewhat of a counterintuitive "break but don't bend" DEF. Specifically, whereas their DEF is very stingy between the 20s, they are horrible if/when their opponent reaches the red zone.

This marks the first time I've ever brought up ST in the matchup post. The reason for it finally emerging this week is pretty clear given the show DeSean Jackson put on against the New York Giants last week. Also, don't forget that Andy Lee and company are the #2 punt coverage unit in the NFL according to DVOA, having gained 13.7 total points worth of field position for the team this season. So, what we have here is the #2 punt coverage unit going against the #1 punt return unit. To ignore this as a key matchup would have been a disservice, especially given the weather conditions that are likely during the game. If this one's going to be a field position struggle, the Niners' punt coverage unit will play a non-trivial role in the outcome of that struggle.

The past few games, the 49ers' pass OFF has revolved around Vernon Davis and Michael Crabtree, i.e., they've received the bulk of the targets. Well, the Tainted Twosome is probably going to have go their separate ways today, with VD being the Simon to Crabs' Garfunkel. That's because, as if you didn't already know that Asante Samuel is pretty good, the Eagles' DEF is ranked #3 in DVOA against #1 WRs (-37.7%). So, with Crabs being quarantined, VD will have to infect PHI's defense instead. The good news here is that PHI's DEF is ranked 24th in Yards Allowed Per TE Target (7.6 Y/T). Unfortunately, PHI's DEF is also a just-below-elite 11th in DVOA vs. TE. Therefore, what this means is that, although VD's targets are unlikely to be very efficient overall, he must make a handful of them count in a big way.

Never thought you'd be seeing this matchup described as "key," eh? Well, this is what I consider to be one of those "attention to detail" kinds of things that I talked about in my Formula for Success post this week. It's clearly not obvious that Weaver is an integral part of the Eagles' pass OFF. After all, except for when Tom Rathman was playing for the 49ers, FBs don't tend to be integral to any pass OFF! However, Weaver has shown flashes of effectiveness in recent games, and, most of all, he absolutely killed the Niners in their home game against the Seahawks last season; seemingly out of nowhere. Don't think for one second that Andy Reid ignored the film from that game when coming up with his plan for this one. And don't think Weaver sat quietly in team meetings without mentioning his exploits against the Niners last season. In other words, "The Weaver Advantage" is one detail I'm almost positive PHI has paid attention to in their preparation for today's game. I really hope the 49ers' pass DEF, with their #26 DVOA vs. RBs (23.1%), paid just as much attention. I'll be watching this one closely.

SF Shotgun OFF vs. PHI Shotgun DEF...This week, it's déjà vu all over again. Just like in the Cardinals game, the Niners' OFF faces an opposing DEF that's (a) really good at stopping shotgun and (b) faced a lot of shotgun this season. In fact, PHI's DEF is probably an even worse shotgun matchup for the Niners than ARI's DEF was. Specifically, 40.3% of PHI's defensive snaps have come against OFF's lined up in shotgun formation, and their DEF DVOA on such plays is a 5th-ranked -15.6%. Furthermore, remember that, against the Cardinals, the Niners' shotgun OFF was pedestrian at best. Therefore, I don't foresee a ton of efficiency coming out of SF when they line up in shotgun. And, given the weather, I wouldn't be shocked if they went back to their Shaun Hill days of a 70/30 under-the-center vs. shotgun split.

*DVOA, ALY, and ASR statistics used to produce this article were obtained from Football Outsiders.