Fooch's Note: Don't forget to check out our game thread for tonight's re-airing of the 1981 NFC Championship game.

Last year this same bowl game featured The Fighting Irish of Notre Dame vs The Hawaii Warriors and was very one sided as Notre Dame slaughterd the Warriors 49-21. Jimmy Clausen and Golden Tate hooked up for 3 TD's and Tate had 177 yards receiving while Clausen had 401 yards passing. The Mustangs will need to get off to a fast start if they don't want the same thing to happen to them as The Warriors in the '08 Sheraton Hawaii Bowl. Nevada will have some fire power coming in to this one as well. Below we will take an in-depth look at some of the key players, stats, and other information... 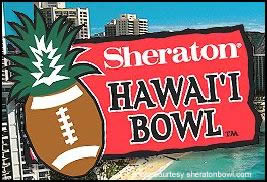 The Wolf Pack has something that most college teams do not have. They finshed the year with not one, not two, but three players on the team with over 1000 yards rushing. To me that is an incredible stat. I am sure that they will try to continue to ride that same horse that got them invited to The Sheraton Hawaii Bowl. They led the nation in rushing with 362 yards a game. Kaepernick, The Wolf Packs Quarterback, will also need to be able to provide some balance with a few passes mixed in to that impressive rush attack or the Mustangs will be able to key on the run and have a fair shot at stealing this one. He has not attempted more than 22 passes in any game this year and hasn't really had to but could be tested tonight. Nevada will be short-handed as two of the key players in the rushing attack will not be able to go in Vai Taua (1345 Yards, 10 TD's) and Luke Lippincott (1034 Yards, 9 TD's). The ball will be in the hands of Mike Ball who put up an impressive 184 yards against the Running Rebels of UNLV.

Key players to watch for The Wolf Pack:

Kaepernick came in to the season after a very respectable '08 campaign. However, the 6'6" Quarterback from Turlock, California didn't have the best year in '09. His worst game of the year was the first against Notre Dame where he failed to throw for a TD; he finished that game with a QB Rating of 36.3. I suspect Kaepernick will return for his Senior season to put some polish on some of his skills and then declare for the NFL draft. If he is able to finish the year strong with a great game tonight, then he will head in to next year on the right foot. We should see the quarterback scramble often as he has all year long. His career stats are: Comp Rate 55.9%, 6899 Yards, 60 TD's, and 15 INT's. He also is one of the three 1000 yard rushers with 148 attempts, 1160 Yards, and 16 TD's.

Ball has mostly stuck to the returns this season but with Taua and Lippincott out, he will need to step up and fill in some very big shoes. He is a solid back that does not shy away from contact though and if Nevada's offensive line can get a bit of a push, he will go heads up with the SMU linebacking corp. Sometimes in big games like this, stars emerge. Ball has the potential to do that tonight. Here is a look at his '09 stats: 19 attempts, 201 yards, 5 TD's. A majority of these stats came against UNLV as Ball carried the rock 15 times for an astounding 184 yards and 5 TD's.

The WR from Los Angeles, California has been the primary target for Kaepernick through the air. While the freshman only has 46 receptions, 653 yards, and 5 TD's; he leads the team in both categories. He will need to have moderate success this evening and I am guessing that he will get some opportunities. Next year, I will look for Wimbley to get closer to the 1000 yard mark...especially if Kaepernick stays.

Durham is a Pro prospect and will be entering the 2010 NFL Draft. He is faster for a Tackle and can kick-slide with the best of 'em. Durham will more than likely need to put on a few more pounds before the combine and hit the weight room very hard. More than likely, I see Durham as a very late round pick but could make a roster somewhere if he works his tail off and soon after could be playing regularly on Sunday's.

When Bo Levi Mitchell, SMU's starting QB went down this year, Kyle Padron stepped in and did a reasonable job completing over 64% of his passes. The Mustangs have a fairly balanced attack on offense in running and passing. Nevada's defense will have their hands full intially but when the adrenaline settles may out-match the Mustangs in all facets. I always like a good underdog story but this one could just be one sided from the get-go. Stranger things have happened in college football though and you just never know.

Key players to watch for The Mustangs:

Recruited out of Dallas, Texas originally by The University of Miami, Junior transfer Shawnbrey McNeal will have to have one of the better games of his collegiate career to give the Mustangs a shot. McNeal has some good moves and enough speed to take it to the house. If Nevada isn't careful with this firey player, they could get burned. His '09 stats are: 224 attempts, 1125 yards, 5.0 yards per carry, 9 TD's.

Sanders is the leading receiver for this SMU receiving group with 91 receptions (a personal best and career high). He also had his first season with over 1000 yards capped by 6 TD's as icing on the cake. Sanders will need to find space in the secondary tonight as Nevada's defense will be trying to swarm the run. Sanders career stats: 278 Receptions, 3667 Yards, 13.2 a catch, and 33 TD's.

McCann is on the smaller side to be considered as an NFL prospect but his skill-set and ability to go after a pass and snatch it out of the air is pretty good. He isn't the best at helping out in run support and wrapping up but has managed to hammer a few balls loose in his career. With Nevada's fierce run attack, McCann could be out powered and could face some problems. His career stats are: 185 Tackles, 4 Fumbles Forced, and 11 INT's.

The Texas A&M Senior transfer is the anchor of this defense. The Texas native is a bit on the small side for the bigger schools as a linebacker but was a good fit at SMU. Nevada's offensive line will be looking to key in on Kennemer to nuetralize the defense and allow Ball to break off a couple of long runs. Kennemer's career stats since transfering are: 163 Tackles, 1 Sack, and 3 INT's.