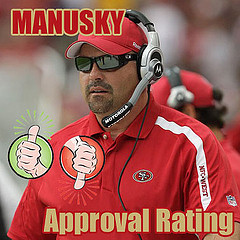 We return for our final approval rating of the week, for defensive coordinator Greg Manusky. A week ago things were looking pretty bad after Aaron Rodgers had his way with the 49ers defense. That abysmal showing saw Manusky's approval rating drop 20 points to 77%.

David Garrard is certainly not a bad quarterback, but even as he does not throw many interceptions, he still puts the ball on the ground as one of the leading fumblers among QBs in the league. While Maurice Jones-Drew did gain ground on the 49ers, he was not able to break through into the end zone or for any long runs. In containing MJD (for the most part), the 49ers put Garrard in more of a playmaking position, and they were able to shut him down.

Will the defense be able to do that on Sunday against Seattle? Will a similar game plan work against the Seahawks? The latest FO rankings came out and the Seahawks (#22) are one spot below the 49ers (#21). Seattle is 22nd in passing and 23rd in rushing, so not exactly an overwhelming force. Of course, they've got a steady veteran QB in Matt Hasselbeck, who will be playing in front of his home fans. And their running game is showing marked improvement with Justin Forsett starting (the Minnesota game aside). What kind of game plan will Manusky need to draw up against the Seahawks?