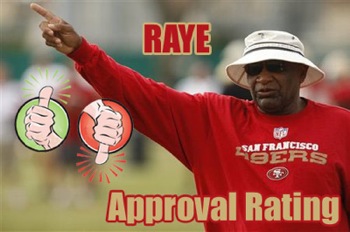 Jimmy Raye managed to stay just a shade above 50% last week, with 51% of folks approving (in some capacity) of the job he has done. The team's offense was less than inspiring, but once again we have to ask ourselves how much of that was play-calling and how much of that was execution?

We've had a lot of draft talk, but I wanted to combine that with Jimmy Raye discussion on a rather broad level. If you were Jimmy Raye, and McCloughan and Singletary asked you what positions you'd specifically like addressed, what would your response be. This is not a question of players, because given how busy you are as OC, you probably haven't watched a ton of college football, and thus don't know all the big names at many of the positions. Rather, it's a question of simply filling positional holes, and letting football ops figure out the specific guys.

Additionally, if you're Jimmy Raye, which positions would you rather fill with veterans (thus, through free agency) versus youth through the draft? Try and get as specific as possible. For example, "Joe Staley is fine at LT, but we'll need a right tackle through free agency to complement him." Or, "Joe Staley is not the best long term option at LT, so I'd prefer to move him to RT and find a long term answer at LT via the draft." And if you decide to make an addition at offensive line, do you also think a player or two or three needs to be axed?

In developing your list of positional needs, rank them in order of preference. There are only a certain number of roster spots, a certain number of draft picks, and a certain amount of cash to be spent, so you might not get all your needs/wants answered. You can include as many positions as you want, but try and order them by importance.