Share All sharing options for: Isaac Bruce's final game? Thoughts from The Reverend 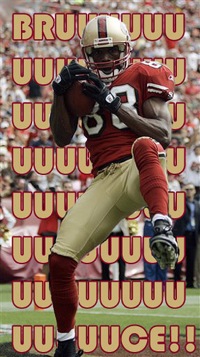 When the 49ers release their Wednesday injury report, it also includes press conference transcripts for head coach Mike Singletary and QB Alex Smith.  Today's transcripts included a little something extra: a good sized (for him) Q&A with wide receiver Isaac Bruce.  The man they call "The Reverend" is more than likely retiring from the NFL after this season.  If he does in fact decide to retire, he'll walk #5 all-time in receptions (1,024), #2 in receiving yards (15,208) and #9 in touchdowns (91).  I'd say that's a fairly solid career.  Maybe he spent most of it with the Rams, but 49ers fans got to enjoy some twilight highlights.

Until today I was under the impression that Bruce was going to be inactive the rest of the way and that would be that.  Apparently, however, some of his teammates have been lobbying Coach Singletary to activate him for this final game at St. Louis.  According to Singletary (transcript coming later), there's a "strong possibility" he'll play.  Given that their is nothing to play for, I don't see why it won't happen.  Even if you want to keep working in Crabtree and Morgan, rolling out Bruce in the game won't exactly take away from that.

On whether he'll be playing in the season finale at St. Louis:

"I'll find out Friday, I'll know. I'll be able to give you a better answer."

On whether he wants to play this Sunday:

"Yes, I'm a football player. I always want to play."

On how he feels about his teammates asking coach Singletary about wanting him to play the season finale at St. Louis:

"You know what, I was kind of surprised, but if it had been me, I don't know. I don't think I would have done it."

"Like I said, I'm a football player and I believe in players earning the right to play. That's just the way I believe."

On whether he feels that he's earned the right to play this weekend:

"I believe that if one player is better than the other, the best player should play at the time."

On whether it was his decision to be deactivated during the season in order to give the other receivers more playing time:

Check out the rest of his comments after the jump...

On whether he understands the magnitude of this weekend's game in regards to his playing legacy:

On whether he's touched by the gesture by his teammates:

"Oh yeah, those are my guys in there. I can respect it but, like I said, I mean football is a different sport."

On whether he has any sentiments on playing the season finale against his former team:

"Well, going back to St. Louis is always special for me. It gives me a chance to see the guys that run the dome. It gives me another opportunity to look at the banners and the rafters and just have some of the memories that I had when I was playing there with some of my former teammates."

On whether he will retire after the season:

"You know, I haven't decided yet, so I'll be giving some information on that in the near future."

"I think it's awesome. I think that he truly earned it. He went out and prepared himself in practice. I can see the change in him as far as his approach verbally and it paid off for him."

On the progression that he's seen from both WR Josh Morgan and WR Michael Crabtree this season:

On what he sees both WR's doing in the near future with the 49ers organization:

"When I look at them, and I just say this to myself at times, I think they have everything that's needed to be here for the next ten years and do somethings, if not the same, or bigger and better than my running mate that I had back in St. Louis. They are big guys that can run routes and get open, and they should be around here for awhile."

On what his legacy to the NFL might be:

"A man of no reputation."

On having any emotions toward playing his last game of the season against St. Louis:

"Well, I won't cry. I mean, it will be fun, like I said, being that dome again. I've always liked playing in that dome for some reason. I'll be excited about it, but once the game starts, I'll be looking for the 49ers to win."

On what he thinks on the hiring of Larry Porter as the new head football coach at the University of Memphis:

On whether he will become closer to the football program: