Football Outsiders and the 49ers: Team Stats through Week 12

Share All sharing options for: Football Outsiders and the 49ers: Team Stats through Week 12

Welcome back for another installment of my weekly look at the 49ers' team stats and rankings according to Football Outsiders' (FO's) DVOA stat.* As I said in my Formula for Success post, the sample sizes are getting so large now that we shouldn't expect big fluctuations in the Niners' DVOAs (there is one exception this week, though). Nevertheless, the direction of week-to-week change is still informative, so I'll focus most of my commentary on that.

Speaking of commentary, I think that, over the past few weeks, I've provided just about every possible big-picture opinion about the 2009 49ers that I possibly can; with most of my opinions being about the OFF. Thankfully, the OFF seems to have addressed almost every one of my concerns. More shotgun? Check. More passing? Check. More downfield passing? Check. More 1st-quarter passing? Check. Therefore, I think it's time for me to pretty much shut my mouth. In this post, I'm just going to present the stats, and keep my comments very brief. I'll leave it to you guys to discuss any general (or specific) topics on the comments section.

Here' how the offensive DVOA and VOA rankings look overall and by type of play, as well as how they've changed from last week (bold = top 8 in the NFL; italics = bottom 8):

The 49ers' pass OFF is now an above average unit according to VOA, which is not adjusted for opponent. In addition, their overall OFF is getting closer and closer to having their heads back above water. At these levels, the 2009 OFF is playing its most efficiently - irrespective of opponent - since 2003. That's saying something.

After the jump, I'll present the rest of the team stats and rankings. There aren't many changes from last week, but the few that exist bode well for the Niners' stretch run... 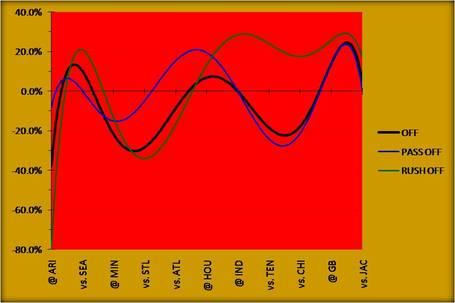 What stands out to me in this chart is how, after an initial (albeit extended) period during which the 49ers' run OFF benefitted from Alex Smith's promotion, the pass OFF has now caught up, with both units now in unison and slightly above average. The fact that both units have settled in at an average-to-slightly-above-average level provides evidence for my main theory for why promoting Smith, and thereby using more shotgun, would help. The point was to open up running lanes for Frank Gore by getting opposing Ss out of the box and giving the OL a numbers advantage in run blocking. A better running game, and the threat of a downfield passing game with Smith, would prevent opposing DEFs from being certain about defending the pass or run on a given play, and that would make the 49ers' OFF better overall. The early ascension of Rush OFF Game DVOA supports the "open running lanes for Gore + help the OL" part of the equation, and the convergence of Pass OFF and Rush OFF Game DVOA at a higher level supports the "49ers' OFF better overall" part of the equation. Feel free to disagree with me in the comments section.

I think we've uncovered the mechanism behind offensive improvement on 3rd down: a 17.8% jump in 3rd & Short OFF DVOA. Combine this with their above-discussed improvement in 3rd-down passing, and it makes you wonder if the Niners had a big passing play on 3rd/4th & short against the Jaguars. Man, wish I could remember. I also wish I could remember who it was that said they should pass the ball more on 3rd/4th down & short. Really, I need to stop getting old and forgetful here.

Not much to see here in terms of week-to-week change. Only thing interesting is that the Niners' OFF dropped in the Home DVOA and Home/Road DVOA Difference rankings, despite actually getting better. All this means is that the other 15 home OFFs in Week 12 got even better.

Obviously, the big change here is the OFF's improvement when winning by more than 7 points. However, given that the Niners hadn't previously run a lot of offensive plays while "winning big," this is the one stat that I think was, in fact, affected by sample size. The good thing, however, is that at least they "regressed towards the mean" rather than just plain "regressed." Nevertheless, the fact that they only jumped 1 spot in the rankings - despite a 21.7% improvement in DVOA - tells you just how horrible they were up until Sunday while winning by more than 7 points.

Here's how the defensive rankings look overall and by type of play (bold = top 8 in the NFL; italics = bottom 8):

Just about everything in this table reeks of "opponent adjustments." The Niners' unadjusted Pass DEF VOA got considerably better compared to last week, but their Pass DEF DVOA hardly budged. Their unadjusted Overall DEF VOA got slightly better, but their Overall DEF DVOA got slightly worse. Why? Because JAX was the #18 Pass OFF DVOA going into the game. In other words, the Niners pass DEF played well, but it came against a middle-of-the-road pass OFF. 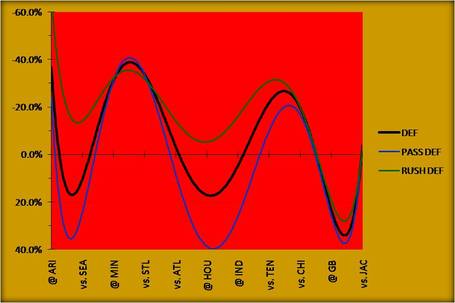 Pretty much no change here: The 49ers' Rush DEF is consistently better than its Pass DEF, with their overall DEF lying somewhere in the middle. What's nice to see, though, is that they're back on the upswing heading into the home stretch of the regular season. Let's hope they can sustain it.

Similar to what changed on OFF, the DEF enjoyed their biggest improvement on 3rd down. Again, this bodes well for the future. When the OFF is able to extend drives, and the DEF is able to get off the field, good things are going to happen. We don't need stats to figure that one out, but it's nice to see the Niners heading in the right direction on both sides of the ball.

Here, the big improvement was on 3rd & short. As I mentioned in my matchup review, those consecutive stops on 3rd & 1 and 4th & 2 were absolutely huge. Apparently, the DEF's 3rd & Short DVOA reflects just how huge they were. Keep it up guys.

As you can see, based on their performance against the Jaguars, the 49ers now have the #2 home DEF in the NFL. Who's the only team ahead of them? That would be SF's last road opponent, the Green Bay Packers. You gotta love the scheduling gods.

Obviously, the 49ers were never losing by more than 7 points against the Jags, so their change in Losing Big DEF DVOA is merely a byproduct of changes in the NFL average. However, they did spend a descent amount of the game winning by 7 or less, so that DVOA change is meaningful. Of course, as I said last week, it's not the DEF who's had a problem holding leads.

OK, so through 11 games, we can draw the following conclusions about the 2009 49ers: