Football Outsiders and the 49ers: Player Stats through Week 12

Share All sharing options for: Football Outsiders and the 49ers: Player Stats through Week 12

Yesterday, I noted some pretty promising statistical improvements for the 49ers' OFF. Today, we'll see whether stats and rankings for the Niners' offensive players have also improved as one would expect; or perhaps the whole is greater than the sum of its parts? To this end, I'll be adding the same kind of change stats I've started presenting in my other posts this week. Again, it's the direction of change, not necessarily its magnitude, that's more important from my perspective.

This week, QBs need a total of at least 90 passes to qualify as having valid FO stats, RBs need at least 96 carries, WRs need at least 38 targets, and TEs need at least 18 targets. Therefore, the players I'll be breaking down this week are Alex Smith, Frank Gore, Michael Crabtree, Josh Morgan, and Vernon Davis. I'll also, of course, be presenting FO stats for the OL, the defensive front 7 (DF7), and the secondary.

As you can see, the only things that have showed any meaningful improvement are Smith's unadjusted stats, YAR/P and VOA. Not surprisingly, the 49ers' unadjusted OFF Pass VOA is what showed meaningful improvement among their team stats. Obviously, Smith threw every pass against the Jaguars, so this is kind of a "duh" finding. However, the important point is that Smith and the Niners had a productive passing attack against JAX, but more than just "productive" is what was expected against the 31st-ranked JAX pass DEF. Nevertheless, you have to crawl before you walk, so Smith and the Niners' pass OFF need to pass well against bad pass DEFs before he/they can start passing well against good DEFs.

After the jump, I'll present and discuss the rest of the stats ...

Here are Gore's stats through 128 carries so far this season (bold = ranked 8th or better; italics = ranked 25th or worse):

Interesting, eh? Gore's stats - adjusted and unadjusted - got worse across the board, yet, the 49ers' Rush OFF VOA improved after the Jags game and their Rush OFF DVOA stayed essentially the same. What gives?

Well, there are two phenomena at play here. First, realize that play-by-play efficiency as a team is compared to the average of other NFL teams, whereas play-by-play efficiency as an individual is compared to the average of other players at that position. So, it seems as though the Niners' running game is getting better relative to the rest of the league, but Gore's running is getting worse relative to other RBs. Second - and this should be far more obvious - Gore's not the only player carrying the ball in the Niners' run OFF. As it specifically relates to the Jags game, remember that Delanie Walker had an 11-yard carry on 2nd & 2, and Alex Smith had a 10-yard scramble on 2nd & 7, both of which are considered highly efficient plays according to DVOA.

So, keep these two points in mind as we move forward in the post. They're going to reappear a few more times before we're done.

Here are Crabtree's stats through 44 targets so far this season (bold = ranked 16th or better; italics = ranked 49th or worse):

Like Gore, we see decline across the board when it comes to Crabtree. However, you'll notice that each of his adjusted stats declined more drastically than his unadjusted stats. So, his stats display similar opponent-dependent characteristics to that of Smith. Hope you're sensing a theme here. Regardless, though, I'll say the same thing I did last week: I'm not worried about Crabs, no matter what the stats say.

Here are Morgan's stats through 51 targets so far this season:

OK. This is a little bit more problematic for me because these are massive declines across the board. It almost defies belief that Morgan's EYds/T can drop that much from targets 44 to 51 on the season. I still say that Morgan will be fine in the long-run as a productive #2 WR once he learns his new position. However, what his stats show is that, contrary to how the saying goes, a rising tide does not necessarily lift all boats. Having only 2 successful plays in 8 targets, and only 1 reception go for more than 10 yards, against the 29th-ranked pass DEF against #2 WRs pretty much defines inefficiency.

If I could call Alex Smith "the #25 QB in the NFL" last week based on the consistency of his rankings, then I can dub VD "the #18 TE in the NFL." Of course, that's far more tongue-in-cheek than my Smith evaluation. We all know VD's much better than his stats show, and, after last week's post, we should all know that the reason these stats are what they are is because VD's tied for 2nd-most-targeted TE in the NFL. So bottom line is, don't freak out.

What is accurately reflected in the table is the fact that the Niners' overall pass OFF improvement has ridden the wave of VD (Aside: Sorry for all the nautical references today. I'm trying to give the STD references a week off.). It's clear that, based on his number of targets, the pass OFF goes as VD goes; based on his increasing EYards/T, VD goes as his new downfield-passing QB goes; and based on his DVOA, the Niners' level of efficiency in the passing game goes as throwing the ball downfield to VD goes.

Finally, as this is my last chance to really mention it, I'll just also quickly note that the Smith did a really good job of spreading the ball around against JAX. Specifically, among the 3 pass catchers I've detailed today, VD had 9 targets, Morgan had 8 targets, and Crabtree had 7 targets. For sure, this is a pleasant development. Having 3 legitimate options in the passing attack definitely beats having 1, which seemed to be the case just 8 weeks ago.

In my enthusiasm over Adjusted BS Rate, I totally forgot to mention the fact that the 49ers' OL is now ranked dead last in the league. Granted, their actual ALY only dropped 0.02 yards per carry, but it's still an ignominious achievement.  Once again, though, it's interesting to see how, although the Niners' Rush OFF DVOA has gotten considerably better since Smith took over at QB, the OL deserves very little, if any, of the credit. This doesn't really fit well with my theory related to the run-blocking benefits of increased shotgun, so I'm pretty much stumped. All I can think of is that perhaps (a) more of the rush OFF's short gains are ending up as "successful plays" because of the down and distance, and/or (b) adjusting line yards for the caliber of an opponents' DF7 is different than adjusting Rush OFF DVOA for the caliber of an opponents' rush DEF overall. In other words, it's déjà vu all over again in this post.

With respect to directional ALY, not much has changed. The OL continues to improve in LE ALY, but that's still most likely due to a regression to the mean; and the same thing probably goes for RE ALY given they don't run the ball in that direction very much either. Otherwise, the glaring problem remains. Jimmy Raye loves to run the ball up the middle despite the fact that his OL absolutely sucks blocking in that direction. 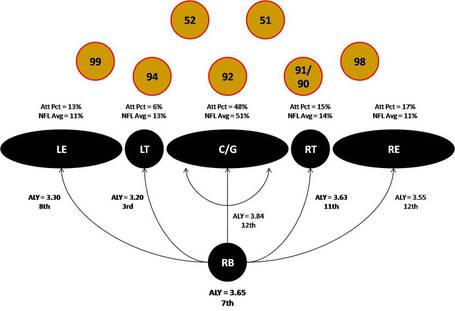 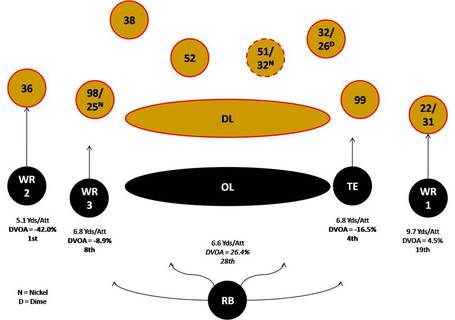 Pretty much everything is the same here, including the fact that starting Dre Bly didn't seem to adversely affect the Niners' pass DEF against opposing #1 WRs. Of course, defending Mike Sims-Walker is just a tad bit easier than defending Andre Johnson, Reggie Wayne, and Greg Jennings. There is one descent-sized change, though: DVOA against receiving RBs. Another week, another game full of screen passes that gouge the 49ers' pass DEF.

OK, so through 11 games, we can draw the following conclusions about several players on the 2009 49ers:

**DVOA, DYAR, EYds, and ALY statistics used to produce this article were obtained from Football Outsiders.