Unlike last week, a win today is going to be a team effort. Don't have a lot of time here, so I won't waste any time telling you that, by reading this, you're getting a point-by-point foreshadowing of what you're going to watch about an hour from now. Let's get going.

Last week, I told you it was the Jaguars' OFF that was their catalyst to victory. This week, it's exactly the opposite. Here's a chart showing how the Seahawks' DEF has performed in its wins and losses: 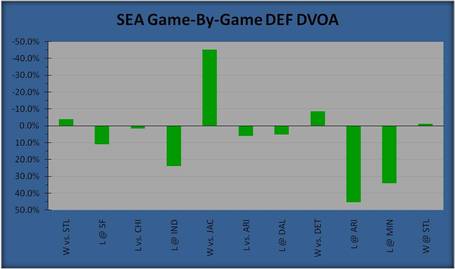 The trend here is as straightforward as it gets. When SEA's DEF plays above average, they win. When their DEF plays below average, they lose. Plain and simple. So what are chances that SEA's DEF is going to play above average today? Well, here are two stats for you that should tell you what I'm thinking: (a) The 49ers' OFF is 13.6% better on the road than at home; and (b) The Seahawks' DEF is 27.7% worse at home than on the road. If the past is prologue, this bodes well for the Niners. It's up to their OFF to exploit this matchup advantage.

After the jump, I'll present a few more matchups that seem to suggest this is a very winnable game for our San Francisco 49ers...

Similar to last week, the Niners have a massive advantage if SEA has to pass in the red zone. In fact, it's even bigger than last week's: 167.9%!!!  Given how well SF's DEF exploited this matchup against the Jaguars, I'm confident they can do it again against the Seahawks if the situation presents itself.

This one's pretty much exactly the same as last week's matchup advantage against the Jaguars: SEA has the #27 DEF DVOA against RBs in the passing game, and Gore, though he's dropped a bit in the RB Receiving DVOA rankings, is still near the top of the league. So, like last week, Jimmy Raye needs to get Gore involved in the passing game early and often.

SF 1st-quarter OFF vs. SEA 1st-quarter DEF...Unlike in their matchup with JAX, the 49ers' actually might be able to have that elusive 10-point 1st quarter that we've all been waiting for. That's because the Seahawks rank 26th in 1st-Quarter DEF DVOA (16.6%), which is light years worse than what the Jags' was going into last week's game (11th, -3.8%).

SF OFF while winning vs. SEA DEF while losing...The Seahawks are almost equally as bad as the Jaguars when it comes to keeping the score where it's at when they're behind. Specifically, they're ranked 22nd when losing by 7 or less (DVOA = 10.0%), and 20th when losing by 8 or more (DVOA = 13.3%). Furthermore, if the Niners can take a slim lead into the 2nd half, their tendency to "go conservative" will be offset by the Seahawks' #30 DEF DVOA when the game is late and close (20.7%).

SF Shotgun OFF vs. SEA Shotgun DEF...Just like last week, this is a great matchup for the 49ers. SEA isn't ranked dead last in Shotgun DEF DVOA, but they're really close (27th, 27.5%). I've got a fever, and the only remedy is more shotgun!

This really does seem like a game that the 49ers should win, given their matchup advantages. Hopefully, I'm Nostradamus for the 3rd week in a row. I'll see you back here on Tuesday with my matchup review. GO NINERS!