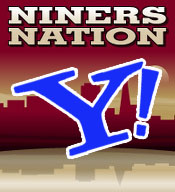 It's with great pleasure that I announce the latest and greates step taken by this humble network of sports blogs.  SB Nation has worked out a content distribution deal with Yahoo! where each team's blog is linked at the respective Yahoo! team site.  So, if you go to the 49ers team page and scroll down just below the "News" section on the left side, you'll see a graphic box that says Niners Nation and links to our most recent articles.

Needless to say, this is a pretty big deal for this site and the entire network.  The news was announced by SBN head honcho Jim Bankoff at SB Nation's official blog:

As members of our communities or readers of our sites, you already know that SB Nation takes a different approach to online sports.  Our focus has always been on empowering fans to participate in conversations that are specific to their particular teams, leagues or sports.  We’ve watched over the years as the popularity of this unique approach has rapidly accelerated.
......

The only change this really means for Niners Nation is hopefully greater traffic, and thus more and more individuals joining the on-going discussions.  Consequently, it's incumbent upon existing members to be welcoming to new folks and maybe cut them a little slack as they get their bearings here.  Everybody has usually been cool with new folks, but I just wanted to throw that out there one more time.

For the new folks coming over from Yahoo! and really anywhere else for the first time, Niners Nation began shortly before Christmas in 2006 and has developed into what I think is the best and most intelligent community of 49ers fans on the Internet.  The network that this site is part of is truly unique in the ability for true interaction between fans.  Technically I run this blog, but it's the commentary from everybody that keeps it going.

If you want to join in the discussion, it just takes a quick moment to register (and I promise no junk email).  Registration allows you to leave comments in all discussions, but more importantly, it allows you the opportunity to create FanPosts and FanShots, the bread and butter of SB Nation.  There will be more details in the upcoming FAQ (hopefully this weekend), but for now, I think the best distinction is made over at our Cubs blog, Bleed Cubbie Blue.  For our immediate purposes, that post pretty much hits the nail on the head.  Just replace any Chicago references with 49ers references!

As far as site rules are concerned, it's pretty simple:

1) Be respectful of other people's opinions: Even if you disagree with them, that's no reason to call them an idiot
2) In that vain, no swearing is allowed except in game threads: In game threads you're commenting in the heat of the action and swearing happens.  However, any other time, if somebody says something that gets your panties in a twist, stop, take a breath and then type.  I guarantee you can say something 10x more intelligent to shut that person down without swearing.
3) Jump in and join the conversation.  People here might give you crap if you accidentally refer to Frank Gore as Fred Gore (yes it happened here), but they don't think you're a bad person because of that.  They're just sharks smelling blood in the water!  Just kidding.  Just brush it off your shoulder and keep the chatter going.

So what can you expect to see at Niners Nation?  Well, the site is always looking to add new segments, but for now, here's what we've got for you:

Golden Nuggets: These are the daily links.  I came up with the name because I'm originally from Las Vegas, home of the Golden Nugget casino, and of course the 49ers, the goldrush, California...well you get the point.  Ninjames handles those on a daily basis and is an absolute beast.  He's been a godsend in getting the links up very early every morning.

49ers Year-By-Year: Each Friday our man howtheyscored puts together an in depth recap of a different season in 49ers history.  We're going in order of season and have gotten through 1976, which means we're fast approaching the golden age of 49ers football.  Most of us don't have a strong knowledge of the 49ers pre-Montana/Walsh (well, at least I don't) so I was really excited when he volunteered his services for this.  You can learn a heck of a lot from these posts.

Statistical Reviews/Previews: We haven't come up with a single title for these posts, but they're oh so money.  Florida Danny has been putting together statistical analysis for this site since the middle of last season.  Danny utilizes all of Football Outsiders alternative stats to give us a different view of a given issue.  During the season he previews each week's matchup and then gives a review afterwards.  This offseason he's reviewed the 49ers in three parts and Thursday will be wrapping up his free agency preview.  He'll have links in that article to the previous free agency articles.  I stumbled across him in the comments section over at Maiocco's blog and it's been the proverbial diamond in the rough.

Draft Scouting: This is a relatively new segment of the site.  Briandean has been starting up some scouting pieces to get everyone focused on the draft.  Every Monday (for the most part) he'll have a different post related to the draft in some regard.  Keep an eye out come Monday morning.

As I said, I'm always on the look out for new authors who can make a substantial contribution to the site.  For now though, we've got an assortment of entertaining options for you.  I think people here will vouch for this site being a fun place to discuss the 49ers.  It can certainly get a little heated, but that's just the passion we all have for the team.

If you ever have any questions, comments or concerns about the site, feel free to email me at ninersnation@gmail.com.