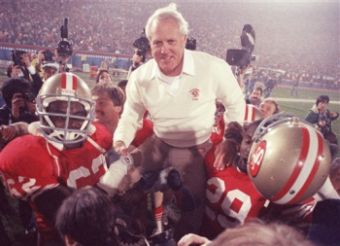 Was there ever really a question?  One of the "drawbacks" to having such great folks in 49ers history is that it takes away some of the vote-able options.  In the case of the head coach, I don't see how anybody could really make any sort of argument that it should be somebody other than Bill Walsh.  George Seifert won two Super Bowls but will always fall in Walsh's shadow.  We could point to Dick Nolan, Buck Shaw (first coach in team history), Steve Mariucci and Mike Nolan but obviously none of them measure up (some more than others) to the great Bill Walsh.

Rather than regurgitate the man's career, I thought I'd address some of the highlights and important points.  He took over a franchise that had been mediocre and never been able to reach the promised land.  It was fitting that he came in and took over with Joe Montana.  Together they turned the franchise around and dominated the 80s.

During his time with the team he not only was a great coach, but also a master of the personnel game.  He dealt a second and fourth round pick to the Tampa Bay Buccaneers for Steve Young, which might go down as one of the all-time great steals in NFL history.  Then there was the 1981 draft in which the 49ers scored Ronnie Lott, Eric Wright and Carlton Williamson.  The personnel side of things was an all-encompassing effort, but Walsh was a key figure.  This is the same man who wanted the team to draft Jake Plummer over Jim Druckenmiller.

We all know about Bill Walsh's fame in developing the West Coast offense.  However, I thought I'd talk a little bit more about his famed coaching tree.  A fitting tribute to that tree is the fact that three of the four coaches in the conference title games have fallen from that tree.  There are other coaches that have developed trees, but none quite compare to Walsh.

The one area that has gotten quality publicity lately is the Minority Coaching Fellowship Program.  The league renamed their fellowship program so that it's now the Bill Walsh NFL Minority Coaches Internship Program.  Walsh first developed the program in 1987 when he brought in various minority coaches to the 49ers training camp.  Four current head coaches actually went through that program: Marvin Lewis, Lovie Smith, Mike Tomlin and Raheem Morris (new TB head coach).

Bill Walsh is a man that 49ers fans will always hold in the highest regard.  The 49ers have had some solid head coaches pass through their ranks.  However, I honestly can't imagine any of them reaching the level of impact that Bill Walsh had on the franchise, the league and the game itself.

It's rather fitting that Mike Singletary is running things now.  Singletary did not graduate from the fellowship program, but when he was first considering entering the coaching ranks, he sat down with Bill Walsh to learn about being a coach.  It'd be hard for anybody to reach the level of Bill Walsh.  We can only hope Singletary can bring a little bit of what Walsh did for this team.