Statistical Review of the 2008 San Francisco 49ers: I. Total DVOA

Share All sharing options for: Statistical Review of the 2008 San Francisco 49ers: I. Total DVOA

AUTHOR'S NOTE (2/10): Since this article was published, I revised the weekly DVOA trendline (and its associated discussion) to better fit the data.

With the Pro Bowl this past weekend, all on-the-field aspects of the 2008 NFL season have come to an end. But before we look ahead to free agency and the draft, it's a good idea to look back at the 49ers' 2008 performance. By doing so, we can identify their statistical strengths and weaknesses and identify situations/positions in need of improvement. This is the 1st article in a 3-part series reviewing the 49ers' season from a statistical (read DVOA) perspective. Part 1, which you're reading now, focuses on overall performance. Part 2, which is scheduled for Wednesday, focuses on offensive performance. Finally, Part 3, which is scheduled for Friday, focuses on defensive and special teams performance.

EFFICIENCY, WINNING, AND PERFORMANCE OVER TIME

Below is a table showing the 49ers' overall performance this past season:

The general conclusion from the first 4 stats is that the 2008 49ers were a team that performed below average overall, did so consistently, and performed slightly less efficiently towards the end of the season; all despite playing against one of the easiest schedules in the league. The final 2 stats require a bit more explanation.

Estimated wins is a stat developed by Football Outsiders that translates total DVOA into victories, whereas Pythagorean wins is a stat originally developed by Bill James for baseball that translates point differential into victories. Both stats basically provide the same information: they tell you how many games a team was expected to win given their stats. Why are they important, or, shall I say, how are they applied? Well, previous research has found that a team's expected wins is a better predictor of next year's win total than is their actual number of wins, such that teams who outperform their expected wins (aka overachievers) are likely to lose more next season, whereas teams who underperform their expected wins (aka underachievers) are likely to win more next season. For instance, the 2006 49ers won 7 games, but had expected win stats of 6.2 (DVOA-based) and 5.1 (Pythagorean), which suggests that they were not as good as their win-loss record indicated. To wit, it shouldn't have come as a surprise when the 49ers won only 5 games in 2007.

With this in mind, it looks like the 2009 49ers are unlikely to suffer the same fate as their 2006 counterparts. Their expected win estimates (esp. Pythagorean) are not that far off of from their actual win total.

Below is a graph that tracks the stats in the previous table from 2004-2008. To read the table correctly, you need to understand the relationship between the stats and the numbers alongside the two vertical axes on either side of the graph. The 2 stats tracked using black lines (i.e., total DVOA and schedule DVOA) are plotted along the DVOA-based axis on the left side of the graph, whereas the other 3 stats are plotted along the win-based axis on the right side of the graph. The reason for two vertical axes is that it allows me to illustrate the relationships between all 5 stats over time. 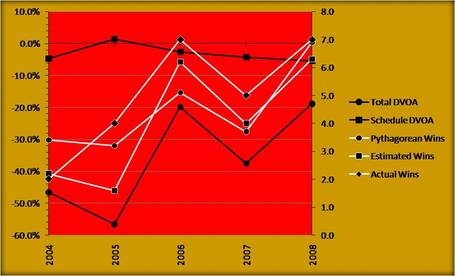 As is clearly evident from the graph, total DVOA and wins (all 3 types) have followed the same general upward trajectory, with one momentary hiccup in 2007. Less evident in the graph, however, is that 2008 was the 1st season since 2004 in which the 49ers weren't wild overachievers in terms of expected wins. You can see this phenomenon in the graph by looking at the relationships between the diamond (actual wins), circle (Pythagorean wins), and square (estimated wins) for each season. The diamond was above the circle and square in 2004, below them from 2005-2007, and nearly on top of them in 2008.

You would think that the reason for a reunion between process (i.e., playing well) and outcome (i.e., winning) in 2008 was the promotion of Mike Singletary. For that thinking to be correct, you'd expect the 49ers to have played better under Singletary than under Nolan because Singletary had a better winning percentage.

According to the table below, you'd be wrong:

However, according to the graph below, which provides more detail by tracking the 49ers' total DVOA over the course of their 16 games, you'd be half-right: 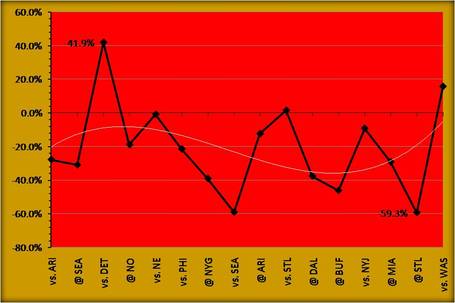 You're half-right because of what the white trendline says. Contrary to expectation, the 2008 49ers were actually playing better overall in Games 1-4 (2 wins) than they were in Games 13-16 (3 wins). However, it is also true that the Nolan-led 49ers were in the final death throes of their downward spiral when Singletary took over, and that, after about 4 weeks of adjustment, they were reanimated enough to make a late-season resurgence.

Some general information contained in this graph is also worth noting. First, the 2008 49ers only had 3 games (vs. DET, vs. STL, and vs. WAS) in which they performed above average according to DVOA. As you've already figured out I'm sure, they were 3-0 in those games, and therefore 4-9 in negative-DVOA games. Also, all 3 of the positive-DVOA games were played in San Francisco. Second, aside from games vs. DET, vs. SEA, @ STL, and vs. WAS, every game DVOA was pretty much in the -40% to 0% range. This further supports the week-to-week consistency suggested by the DVOA variance statistic I presented earlier.

IF ONLY THE FIELD WAS 40 YARDS LONG

Man, the Niners were a pretty descent team between their own 40 yard line and the opponent's 20. Remember, total DVOA includes offense and defense, so that red zone stat isn't all on Mike Martz. Well, let me rephrase. As you'll see in Part 2 of my review, that red zone stat is almost all on Martz. Nevertheless, to give you an idea of just how bad the Niners were in the red zone, the #1 red zone team this season was TEN, with a total DVOA of 71.7%. So basically, SF was over 110% less efficient than TEN in one of the most crucial game situations.

IF ONLY THE GAME WAS 30 MINUTES LONG

Looking at these stats, there must be something going on in the locker room at halftime that makes the players lose their focus heading into it and coming out of it. Two guesses immediately come to mind: (1) Singletary's weekly trou-dropping expo, or (2) a testosterone-enhancing positive reinforcement technique ala "Major League." Either way, you shouldn't interpret these stats to mean that the 2008 Niners were a team that started and finished games well, and therefore that such performance bodes well for their win-loss record next season. Rather, all they tell you is that the Niners were mediocre in the 1st quarter, sucked badly in the 2nd and 3rd quarters, and just plain sucked in the 4th quarter. To further illustrate this point, the Super Bowl champs, in comparison, had quarter-by-quarter total DVOAs of 2.8% (13th), 24.5% (6th), 52.9% (1st), and 28.0% (6th).

IF ONLY THE GAME WAS PLAYED AT CANDLESTICK

Continuing the theme, below is a table showing the 2008 49ers' total DVOA* by game location:

There's not much to discuss here. The Niners were awful on the road this season. Remember, as I said earlier, they didn't have one above-average game on the road all season. So to refine my thinking from the previous section, there must be something going on in the locker room at Candlestick.

IF ONLY THE GAME WAS PLAYED FROM BEHIND (OH WAIT, IT WAS)

Below is a table showing the 2008 49ers' total DVOA* under different game score situations:

This season, the Niners were one of the worst 5 teams in the NFL when they were ahead during a game. As loyal fans (aka The Faithful?), these stats should come as no surprise. Aside from 2 home games against teams with a combined 2-30 record (DET & STL), when was the last time the Niners won by more than 17 points? Answer: 2003 Week 14 vs. ARI, 50-14. And, aside from those games, how many of their wins this season involved holding on to a lead by the hair on Singletary's (site decorum)? Answer: All 5.

• They were an inefficient team that played consistently poorly from week to week, except for a performance trough shortly after the Nolan-Singletary transition.

• They were better than recent 49er teams, and, unlike recent teams, their actual win total was consistent with what you'd expect from their DVOA stats.

• Although consistent overall, they exhibited situational dissociative identity disorder. They were descent only between their 40 and the opponent's 20, only in the 1st and 4th quarters, only at home, and only when playing from behind.

Coming up on Wednesday, a detailed breakdown of offensive DVOA. TO BE CONTINUED...

**DVOA and Estimated Wins statistics used to produce this article were obtained from Football Outsiders.