OT: American University Eagles back in the dance one more time!

Share All sharing options for: OT: American University Eagles back in the dance one more time! 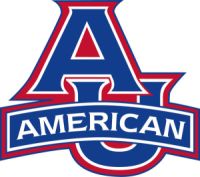 Although I got some posts up, I was a bit out of town this week, thus limiting my time on the site.  As we roll into the weekend I'm back and will get things rolling a little more now.

In the meantime, for those who didn't know, I did undergrad at American University in Washington, DC.  Last year my AU Eagles made their first ever NCAA tournament appearance and gave the #2 seeded Tennessee Volunteers a nice little scare before falling.  This year, behind seven seniors, including all five starters, AU handled their conference business, dismantling the Holy Cross Crusaders 73-57.

The folks at Bracketology are currently projecting AU as a 13 seed.  Given their seniors, great team defense and 3-point abilities, they could be a real headache for a 3 or 4 seed next week.  It may not end well, but for now I'm psyched.

Speaking of college basketball, a couple items for everybody.  We have two relatively new blogs you may or may not have heard about:

More importantly for next week: I've set up the Official Niners Nation Bracket Challenge over at ESPN.com.  There isn't a prize, aside from bragging rights, but I think it'd be a fun way to do something non-football.

If you decide to join the group, the password is 49ers.  Please set your team name as your Niners Nation user name so we know who is who.  If you aren't registered at espn.com, it only takes a quick second to set it up.  If you have any questions about this throw something down in the comments.  If you forget to sign up in the next couple days, I'll be advertising for the Bracket Group every day from Sunday thru Thursday morning.

In the meantime, feel free to use this thread to talk up your own college basketball team (if that is something that interests you).