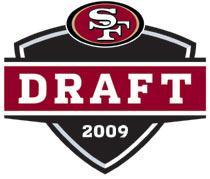 I knew right away that Alex Smith would never be a standout quarterback in the NFL. The name just didn't work. Look over the list Hall of Famers. The names just pop out. Joe Montana, Warren Moon, Johnny Unitas, Fran Tarkenton, Bart Starr--I mean, the 49ers #1 pick in 2005 wasn't even the only Alex Smith in that draft. Our Alex would have had much better chances if he'd gone by his vampire name, "Attila of Whores" (I swear that's what came up).

So, let's take a look at the top prospects in 2009. Set aside the game film and scouting reports. Who just sounds like they can play?

WR: Ramses Barden- Ramses II has been described as Egypt's greatest Pharaoh. Barden has some work to do if he wants to be called Ramses "The Great".

OT: Phil Loadholt- Sounds like the type of guy you want to run behind.

After the jump I'll reveal the All-Name Defense.

DT: Peria Jerry- I swear they got his first and last name backwards in kindergarten and it just stuck.

OLB: Ataefiok Etukeren- That name makes me cross-eyed. Just want to hear a play-by-play guy attempt this in the 4th quarter of a preseason game.

FS: Dre'Mail Hardin- Sounds like some new form of spam that your junk filter can't detect.

SS: Al Afalava- All I can think of when seeing this name--is this guy. Honorable mention: Sha'reff Rashad.

CB: Wopamo Osaisai- Had a few too many of these at a sushi bar once. Don't remember much after that.

So, there you go. Throw out your mock drafts. These guys are can't-miss.