Get to Know your Gold Rush: Alexis

Share All sharing options for: Get to Know your Gold Rush: Alexis 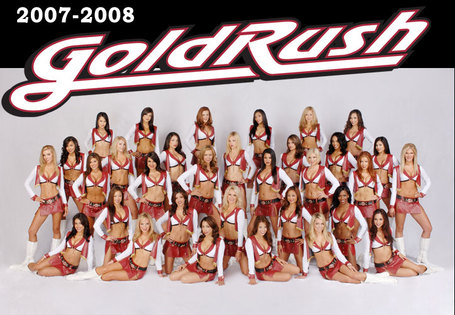 How you doin' Nation? ProfessorBigelow here with my first installment in a weekly series I'd like to call "Get to Know your Gold Rush". Some of you may be asking "Professor, who the [site decorum] are the Gold Rush, and why should I care?" Good question! Let me explain; an integral part of football, since the invention of the helmet, has been the inclusion of attractive females on the sidelines to make men feel more at ease with the fact that they are watching 22 men slam their bodies into each other (not that there's anything wrong with that). These females were aimed at being the leaders of cheering the home team they represented on. Initially they were nicknamed "Yellmasters**". Weird right?!?! Today, thanks to the advent of Public Relations, we have cheerleaders.

Consider us lucky; many NFL teams do not have a cheerleading squad. The Packers discontinued their cheerleading squad in 1988 due to fan indifference (its hard to dance the YMCA in a parka), the Steelers only had cheerleaders from 1961-1970 (the metal plating got in the way of dancing to "Good Vibrations"), and the Lions, Browns, Bears and Giants have never had any girls in mini-skirts to ogle cheer their team on (maybe because the only women dressing that skimpy in Chicago, NY, Clevland and Detroit are women being paid $10 per 4-12 minutes of work). But fret not Niner faithful, the Gold Rush has existed since 1983, and the classiest girls in the league show no signs of slowing their gyrations down.

So what will these posts be all about? Each Wednesday (hump day just seemed to make sense to me) I will profile a new member of the 49ers Gold Rush squad with a little Q&A, followed by a little T&A. And ladies, do not fret, some Gold Rushers will have an accompanying video so you can witness their flawless dance moves (it's not all about the barely-there uniforms, cheerleading is an art!)

So without further ado (By which I mean continue after the jump to see all the good stuff) I present the lovely Alexis... 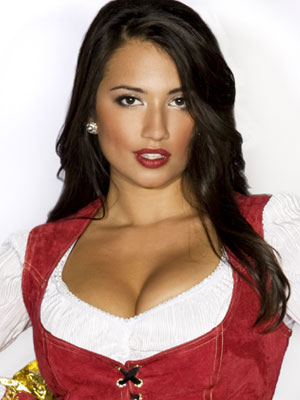 Now I couldn't get an official sit down with Alexis; but I did find a few questions asked of her, thanks to 49ers.com, and chose some of the best ones:

Q: What is your most prized procession?

A: I have a one year old boxer named Lily.

Q: What goals do you have for yourself?

A: I the next couple years, I will graduate from college with a degree in Business Management with a minor in Spanish. I also hope to become a first-home buyer and eventually a supporting wife and mother.

Q: What is the most important attribute of a 49ers Cheerleader?

A: I believe the most important attribute of being a member of the Gold Rush is having the ability to touch someone's life in a positive way.

Q: What is your most memorable moment as a Gold Rush member?

A: Over the past three years, I have had the opportunity to attend numerous charity and community events as a cheerleader. It is a great feeling to help out at these events and still be able to do what I love the most, dancing and supporting my favorite football team!! 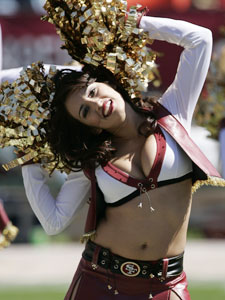 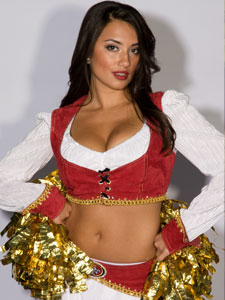 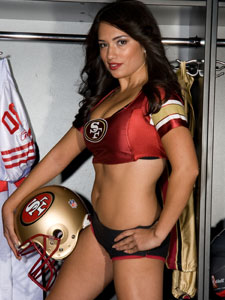 And if you want to listen to what Alexis has to say/see some of her tryouts, check that out here (again, thanks to 49ers.com)

That's all for today boys, put it away and clean up. Next week: More pictures to get you through your day, one glistening, heaving chest at a time...