As we get closer to the draft, we begin to see some of the prospects predicted to go in the first two rounds making visits to NFL teams that could be interested in adding them to their roster. While the combine and pro days give a big insight into how a player plays football, these visits to team headquarters for interviews and workouts could play as much of, if not a larger role, in helping a team decide who to pick.

That being said, one player that caught my eye making NFL team visits was DE Robert Ayers from the . Chris Steuber of Scout.com is reporting that Ayers is visiting the Buffalo Bills, and that was what caught my eye. The Bills are of particular interest to me based on their draft position (Pick 11, right behind us) and what is considered to be one of their biggest needs (a solid pass rusher, just like us!). So the fact that they are bringing him in for a look makes me want to take a look at him. 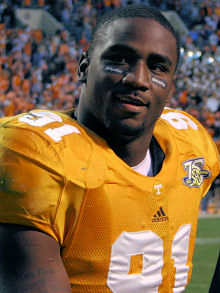 Scout.com has Ayers ranked as the #5 overall DE, standing at 6-5, weighing in at 270 lbs, and labels him as somewhat of an enigma. He wasn’t a standout at UT, but had an impressive Senior Bowl and combine interview/work out session, climbing up many team’s draft boards. He isn’t known for upper body strength, but for his strong lower body, quick legs, and ability to make quick cuts to the inside of the O-line. At 270 lbs he might not be your classic 3-4, and could be transitioned over to an OLB role, but nevertheless it is important to take a gander at the guy and what he could bring to the table.

One other feature to note is that in 2005 he was charged with felony aggravated assault following a football vs. fraternity fight on campus. The charge was later reduced to a misdemeanor assault and he pleaded guilty, but has stayed out of trouble since then. I say it’s something from a long, long time ago so not an issue to harp on, but it is not something one completely overlooks either.

In the end, after looking at this man and what he can bring to the table, I’m not sure if he is the DE we could use, specifically with the first pick. He’s a bit small for the 3-4, and pass-rushing is considered a weakness of his (which is what we neeeeeeeeeeeeeeed). However, if this guy is around in the second round when our pick comes up, I’m fine with picking a DE with the technical skills and strategies that could lead to a nice career of pressuring the unfortunate souls we have to play in years to come.

After the jump, I have the ESPN Insider scouting report on Mr. Ayers, a highlight video or two, and some links to scouting profiles on this DE. 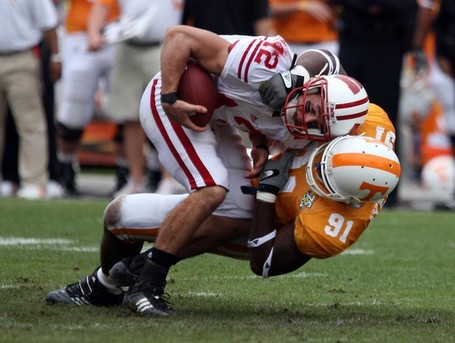 red shirted Ayers in 2004, and he appeared in nine games in 2005. From 2006-2007, Ayers started two of the 27 games he appeared in, recording a total of 59 tackles, 44 unassisted tackles, 15 tackles-for-loss, five sacks and three deflected passes. In 2008, Ayers starts in all 12 games recording a total of 49 tackles including 34 unassisted tackles, 15.5 tackles-for-loss and three sacks. He intercepted one pass and recorded six quarterback hurries.

He broke his hand during an August scrimmage in 2006 and played part of the season with a cast.

Ayers was charged with aggravated assault in 2005 and

Quicker than fast and can beat blockers to the point of contact. Fluid in changing directions when attacking up-field; shows good lateral mobility scraping down the line of scrimmage. Has some experience lining up in two-point stance.

Below-average upper body strength and doesn’t deliver a violent initial punch but has active hands and fights to get off blocks. Lower body strength appears adequate on film. Appears to gear down when teams commit two blockers to him.

Can get caught trying to time the snap rather than going on movement of the ball. Gets caught too far up-field at times and vulnerable to draws. Does an adequate job of staying home and taking away cutback lanes/reverses/end-around.

Lacks ideal closing speed but explosive, gets good inside lean and flashes the ability to turn the corner. Can redirect inside after starting outside and flashes effective double moves. Keeps heap up and generally does a good job of getting hands up when sees quarterback start throwing motion. While drives legs on contact, isn’t a powerful bull rusher.

Explosive first step and can disrupt plays in the backfield. Takes sound pursuit angles and shows good closing speed for size. Plays too high and has some problems holding ground as a result. Doesn’t split double teams well. Inconsistent open field tackler though flashes the ability to deliver the big hit.