Share All sharing options for: Niners Nation 101: FanPosts and FanShots

Due to the sizable increase in traffic over the past couple months, we have a lot of new regular readers at the site.  It's been a while since I posted any details about the gadgets and doodads on Niners Nation, and now is as good a time as any to delve back in.  Accordingly, I've created a new section of the site called Niners Nation 101, of which this is the first post.  Over the next few months I'll roll out a few more posts explaining a little bit of this, that and the other thing.  Some of our other sites have rolled out similar features, so I may borrow liberally from their explanations.

Although this is old hat for a lot of folks here, I strongly encourage everybody to read this and make sure you understand things.  I don't want to squelch participation, but I think there are ways to organize things to optimize the conversation.  Before I get into the difference between FanPosts and FanShots, I wanted to discuss the "RECOMMEND" feature.

When big news comes down the pipeline, it's very easy for people to get excited and post multiple FanPosts about a single subject.  When you go to post a FanPost, the first thing you should always do is double check the list of most recent FanPosts in the right column as well as front page posts and see if the topic is being discussed.  If you see a FanPost discussing the 49ers existing QB situation, it's probably not necessary to create a "Shaun Hill is God" FanPost.  I like to think this site goes above and beyond the general message board mentality of post early, post often, and post again.

However, I do realize people will interpret a FanPost one way and think their own FanPost is different enough to be worthy of posting.  I'm fine with that because I'm only here to censor swearing.  I'd rather let the readers determine what they think are the best FanPosts on the site.

One such way to promote the better FanPosts is by Recommending them.   To do that, go to the bottom of any FanPost and you will see  the word "rec" and an icon that looks like a page with an up arrow.  By clicking this you "recommend" that the post you just read will get promoted to a higher panel! Instead of being in the "FanPost" section, the article bumps up to the "Recommended" posts panel, where it will stay for a much longer time.  To move a FanPost up to the Recommended FanPosts, three people need to Rec the FP, as seen with Dre's.

Now a quick look at the difference between FanPosts and FanShots.

FanPost
A FanPost is meant to cover a topic in somewhat detailed fashion and accordingly open the door for discussion.  It can be about an issue already being discussed, but a new FanPost about an existing topic should take some new approach to the subject.

A good example would be Dre's FanPost called Niner's Niblets.  The FanPost was about potential free agent acquisitions, which is a topic that has been discussed ad nauseum.  However, Dre listed several options to consider, some details on each guy, and then a yea or nay vote on each guy.  It was sufficiently detailed to provide analysis and give people something to discuss themselves.  It was a new angle on an existing topic.

Another example that I wasn't sure about at first, but have realized is solid is MrLomez's post "Kurt Warner should go to the 49ers - Hell to the yea."  It's a little bit repetitive to other threads, but given the detail he put forth, I think it was a legitimate option as a FanPost.

FanShot
FanShots are more for quick hitting items that could be links, video, pictures or even just a quick thought that's too short for a FanPost. They're located directly below the FanPosts in the right hand column.

A good example of a FanShot would be this video.  Another good example was the Vonnie Holliday FanShot.  A player was released and 49erLou wanted to get people's opinion on whether to consider him.  This kind of post would work as a FanPost if 49erLou included more details about Holliday and why he might fit in as a 49er.  To just point to a recently released and ask yes or no works better as a FanShot.

To use an example that could be adjusted for both a FanPost and FanShot, I'll point to one of our newest member Aussie Jack.  He was inquiring about the 49ers 2009 schedule because of plans to possibly come to a game around Christmas time (I believe).  If you're just trying to get a question answered as to where to find the 2009 schedule, a FanShot is the way to go.  However, if later in the year, Aussie Jack is planning a visit out here and wants to get fans together before a game, a FanPost could work for him to explain his own details and discuss options with people.

After the jump, I'll roll out a more extended look into FanPosts and FanShots.  There's a lot of detail there so feel free to ask any questions.

I copied a good chunk of this from Bleed Cubbie Blue, our Cubs blog, thus the reason the tagging graphic lists Cubs stuff.  I figure, why try to reinvent the wheel, right?  For people who know how to post FanShots and FanPosts, the tagging stuff towards the end might be useful for you.

FanShots are quick posts, links, images or videos from around the internet -- it's not just for photos, as at least one person here mentioned to me; there are several different types of things you can put in a FanShot.

1. Click "New FanShot" -- Seems simple, right? While logged in, visit any page of Niners Nation and click the handy "New FanShot" button. Enter the link or pic URL in the proper place.

2. Use the FanShot Bookmarklet -- Clicking and dragging the "Share on SB*Nation" button (which you can find here at the top of the FanShot section, right underneath the top ad bar; just click "FANSHOTS" on the front page to get there) to your bookmarks bar (the area under your address bar in your browser) will allow you to post to NN quickly and easily while browsing the internet.

Once you have a "Share on SB*Nation" button in your browser, you have one-click posting of FanShots at your fingertips. Clicking the button will bring up a dialog box that looks like this:

Just select the type of FanShot you wish to post, apply the proper tags (more later) and hit publish (that "Front Page" check box is for me as the site admin, to put it on the front page if I choose -- you've seen the blue box posts on the front page; those are FanShots that I've posted).

FanPosts are just like front page stories, except they're written by you, the Niners Nation reader. You can help keep the best FanPosts on the list longer by recommending them using the "Rec" link at the bottom of the post. Three recommendations puts a FanPost on the rec list (might increase that in the future).

What makes a good FanPost?

The tech team at SB*Nation has built a powerful WYSIWYG (What You See Is What You Get) editor, which makes life a lot easier for us.  If you know how to format using Microsoft Word, you can make a perfectly formatted FanPost here at Niners Nation.

● Start by opening Word.
● Write your post completely in Word, making all your formatting adjustments there.
● Highlight and Copy your work.
● Click New FanPost
● Click the "Paste From Word" icon (upper right icon in the WYSIWYG editor)
● Paste your content into the dialog box.

Give it a Descriptive Headline -- "Question" may, in fact, be what you are posting, a question you want us to consider; but that doesn't exactly inform us what the topic is about. Your headline should be informative, above all else, with bonus points for creativity.

Poor Headline: What Do You Guys Make of This? (Made up title)
Good Headline: Is Demetric Evans the answer or should the 49ers make a run at Jason Taylor? 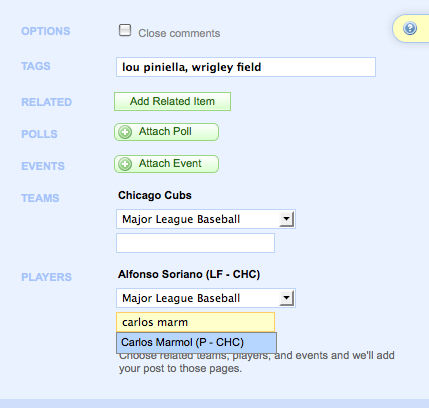 To the right of the text area in both FanPosts and FanShots you'll find the area for tagging your posts, as shown in the illustration above. Tagging is important because it helps your content show up in searches and in dynamically-rendered content areas, such as on a player page or in the new "More from Niners Nation" box at the bottom of each post. It helps increase your post's exposure.

Tagging is simple. Just type the topics of your post into the area cleverly labeled "tags." Use commas to separate tags, as shown above. If you type a tag that's already been used at NN, it'll begin to autocomplete.

Players and Teams have their own dedicated area, which will help link your posts to the proper Player and Team Pages. These fields also auto complete, just begin typing the player's name and it should fill in; For example, if you type in "vernon d" the name Vernon Davis will appear.  When this happens, just click on the name and it'll stick with the post.

If you want to have a poll with your post -- click "Attach Poll". The options that come up are self-explanatory; just remember to save your poll when you're done. The "Attach Event" option allows you to tie your post to a specific game. Clicking the "Attach Event" button will bring up a box that lists the 49ers' past and future games -- click the drop-down box to select "completed", "upcoming" or "in progress". Clicking the Add button will make sure you post appears on the page for that specific game.