Share All sharing options for: Alex Smith as QBOTF? 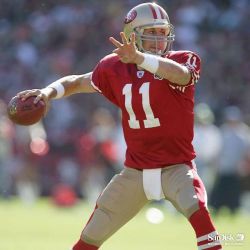 Fooch's Note: This post was actually written by grantmp, who was kind enough to send it along. If anybody ever writes something up that they think is too long for a FanPost, OR they simply want a little more exposure for the piece, feel free to email me. Thanks again to grantmp for putting this together.

Ever since the Niners drafted Alex Smith, I have been a Smith supporter—mostly because as a Niners fan, I can talk myself into almost anyone. Smith seems like a good kid who tries to do all the right things, even watching film of Joe Montana, coming to meetings he doesn’t need to attend, etc. Everyone here at Niners Nation seems to agree that this offseason is decision time on Alex Smith, mostly because of the monstrous cap figure he’d have if he were brought back under his current contract ($12.29M). I’m interested in looking at whether it makes sense to continue to call Smith the Quarterback-Of-The-Future for the 49ers.

Even at this point, four years after the Niners drafted Smith and after 2 and a half seasons of seeing Smith in action, the word people continue to associate with Smith is *potential*. Smith is smart (40/50 on the Wonderlic), he’s got a strong (if not Flacco-esque) arm, prototypical size, great mobility (4.7 40), and good accuracy. His college career was highly successful (a 21-1 record as a starter), and Smith’s own statistics were impressive, as he recorded completion percentages of 65% and 67.5% in his sophomore and junior seasons. These were some of the reasons the Niners picked Smith 1st overall in the 2005 NFL draft.

Smith’s first NFL season was disastrous, perhaps predictably so for a QB who declared eligible for the draft as a Junior and out of a spread-offense background. These warning signs didn’t prevent the Niners from throwing Smith out there for all or parts of 9 games his rookie season. Smith fumbled 11 times and threw 11 picks against one touchdown in the 2005 season. In 2006, Smith made significant strides under Offensive Coordinator Norv Turner, reducing his fumble rate (11 fumbles in ’05 vs. 10 in ’06 despite appearing in 7 more games), and improving his td/int ratio (16 tds/16 ints in ’06). His completion percentage also jumped 7.1 percentage points and he reduced his sack rate by half.

The 2007 season led Smith into the predicament he and the Niners now find themselves in. In the first 3 games of the ’07 season, the Jim Hostler-coordinated Niners offense struggled mightily, as did Smith himself. Through three games, Smith threw 1 td and 1 int, completed 51.8% of his passes and averaged around 150 yards of passing offense per game. In the fourth game of the season against Seattle, DT Rocky Bernard broke through the Niner o-line and sacked Smith, separating Smith’s throwing shoulder in the process.

After the injury, Smith sat out weeks 5 through 7, but came back to play 3 games, again averaging around 150 yards per game passing, but with a 46.7% completion percentage. After the second game against Seattle in Week 10 of the ’07 season, Smith was shut down for good and had surgery on his separated throwing shoulder. After playing with limited success in the ’08 preseason within Mike Martz’s offense, it was discovered that a bone was broken in his throwing shoulder, and that the injury would require season-ending surgery. Smith spent the ’08 season on IR.

The numbers don’t look good for Mr. Smith. In fact, the only reason he’s still on the roster is because of his potential, which to this point has gone largely unfulfilled. Most Smith-apologists point to the ’06 season as an indication that Smith can be a serviceable-to-good option in a run-heavy offense that makes significant use of roll-outs and play-action. Smith throws a nice ball, has nice mechanics (no Shaun Hill-esque backpedalling), and has, by now, seen enough playbooks to pick up any offense that’s simpler than Mike Martz’s. Finally, Smith is only 24, which means he’s had 4 years of NFL experience/association despite being only 2 years older than Mark Sanchez.

Urban Meyer, Smith’s coach at Utah, has said that it took Smith a while to feel totally comfortable in Utah’s spread offense, but that once he got it, he was a perfect fit. It would stand to reason that if Jimmy Raye is planning on being in SFO for multiple seasons, Smith could still be the long term guy even if the Niners start with Shaun Hill at QB.

With Hill, Smith, and Huard under contract for the ’09 season, I don’t see why the Niners would look to draft another QB at any point—not in the first round because a) the price would be too high and b) the only options there would also be Juniors, and not later because a) the upside of the guys they would find later wouldn’t be greater than Smith’s still is at this point and b) those guys would take just as long or longer to develop. So what are your thoughts?