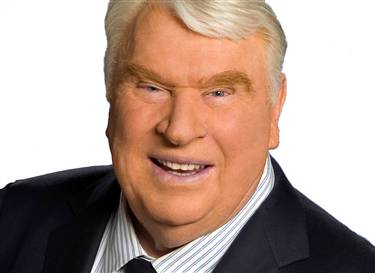 "It's time. I'm 73 years old. My 50th wedding anniversary is this fall. I have two great sons and their families and my five grandchildren are at an age now when they know when I'm home and, more importantly, when I'm not.

It's been such a great ride... The NFL has been my life for more than 40 years, it has been my passion -- It still is. ... It's still fun and that's what it makes it hard and that's why it took me a few months to make a decision.

I still love every part of it -- the travel, the practices, the game film, the games, seeing old friends and meeting new people... but I know this is the right time."

At least for me, no color-commentator comes even close to Madden. He announced on FOX for a while, making him initially an NFC guy, so I got used to him announcing Niners games during their reign through the 90's. When he moved to MNF, and eventually SNF, he could make even a blowout sound like one of the most fascinating games ever played. Pat Summerall and John Madden will go down in history, in my mind at least, as the greatest announcing duo in Professional Sports history.

Think of this as an open thread to show your love for John Madden and his career as one of the greatest NFL announcers to don a microphone.

P.S. - Credit to bayboy to getting the initial FanShot about this up (I'm getting kind of used to saying that now).

FOOCH'S NOTE 9:50AM: I don't have an official source, but The Big Lead is reporting that Chris Collinsworth has already been named as Madden's replacement in an NBC conference call.