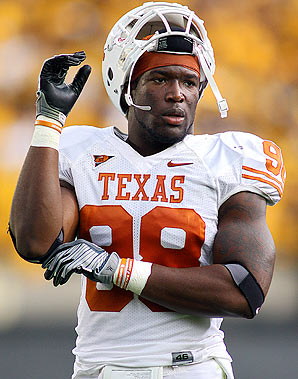 As we've rolled through this offseason, much draft discussion has centered on the need for a legit pass rushing outside linebacker.  In the 3-4 defense, you want your OLBs bringing the heat of pass rush.

At the present time, Parys Haralson and Manny Lawson are the two starters outside.  Haralson is developing into a very solid pass rusher and was rewarded accordingly with a contract extension.  Manny Lawson has not developed as a pass rusher, but rather more of a coverage and run support type of guy.  He's seen his development stunted by injuries, so we're not quite sure what we've got with him.  He says he's bulked up a bit this offseason in hopes of developing his pass rushing game.  Whether that proves effective remains to be seen.

Although Haralson has been extended, many folks still see an outside linebacker as a distinct possibility with the #10 pick.  At this point I don't know what to expect, but depending on who is available at 10, I could see numerous positions being filled.  Brian Orakpo could be just one of those guys and the discussion about him has certainly been detailed.

Orakpo is intriguing option at #10.  It seems unlikely he'll be there, but crazy things could go down with the first nine picks.  Barrows did a mock draft with some other writers and Orakpo landed in his lap.  Also, Todd McShay's latest mock draft has Orakpo going to the 49ers.  They're just mocks, but they are still certainly possibilities.

Physical Strength
As many report, the man is just a chiseled monster.  As the video after the jump shows, he can lift a bunch of chains (clearly an important trait in football!).  The key thing is that he brings some serious strength to the position.  However, in reading over the ESPN scouting report, I noticed something a bit alarming:

Stronger in the upper body than he is in the lower body. Explosive upper-body power. Can bench press 500-plus pounds and notched 31 reps (standard 225lbs) at the combine. Lacks ideal lower-body strength, though. Struggles to anchor at times versus bigger OL that can get into his body.

If the 49ers are able to develop a legit defensive end to go alongside Justin Smith, will that make up the difference for a guy like Orakpo?  In the 3-4, you're hoping for your defensive ends to occupy the offensive linemen.  If the 49ers can develop that, then maybe that weakness can be countered?  Any other thoughts on that?

Along with that are some questions about his durability.  He's recovered well but he's dealt with various nagging injuries (strains in both knees during college career and hamstring strain at Combine).  If he's going to be an every down linebacker (which one would expect from a first round pick), it'd be nice if he could stay healthy.

However, given the 49ers current outside linebacker situation, it's entirely possible they could work around that.  If they drafted Brian Orakpo (and this could be applied to someone like Everette Brown as well), they wouldn't be looking at an every down linebacker initially.  Rather, they would have a 3-person rotation depending on the situation.  It's a lot of money to spend on a platoon, but maybe it's worth considering.

I think it comes down to how people think the OLB situation would play out, whether the draft pick is Orakpo, Aaron Maybin or Everette Brown.  How do you get playing time for the draft choice along side Lawson and Haralson?