Share All sharing options for: With the 146th pick of the NFL Draft, the San Francisco 49ers select Scott McKillop, ILB, Pittsburgh 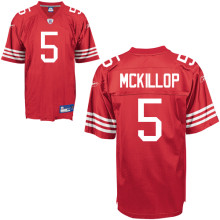 Well, that certainly qualifies as a bit of a head scratcher, but I guess not surprising for a Mike Singletary team?  With the 146th pick here in the 5th round, the San Francisco select Scott McKillop, inside linebacker from Pittsburgh.  Here's a scouting report for the folks who (like me) don't know about Scott McKillop (from late January):

Strengths: An incredibly productive two-year starter who has the intelligence and savvy to make an NFL roster. Did well adjusting himself and teammates before the snap. Very intelligent football player who likes watching film and learning. Fundamentally sound player. By-the-book tackler. Good size. Was one of ’s team leaders. Does a nice job breaking up passes. Had 11 pass breakups over his final two seasons.

Weaknesses: McKillop will be overlooked because he’s not especially fast or athletic. Is too slow to get around the corner on a pass rush. Slow from time to time reacting to passes. Poor hands. Needs to get stronger in his lower body to handle bigger NFL running backs. Struggles at times shedding blockers. Final word: What you see with McKillop is what you’ll get. He was a product middle linebacker for the Panthers who knows the fundamentals of the game. While he’s limited athletically, he makes up for it in determination and intelligence. Named a first-team all-conference member each of his two years starting.

After the jump I found a Pitt promo video on YouTube.