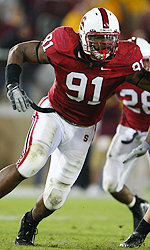 Well then, that was quick.  Thanks to Saint from Silver and Black Pride for the heads-up on this one.  According to KFFL.com, the 49ers have reportedly signed undrafted free agent Pannel Egboh, a defensive end out of Stanford (signing now confirmed by Maiocco via agents).  Not surprising to see a local guy get signed as UDFAs usually include a lot of locals (for any NFL team really).

If any of you folks follow Stanford football we'd all love to hear your thoughts.  For now, he is in fact listed in player databases, which is a good start.  He stands 6'5 276 lbs.  A bit undersized for a 3-4 defensive end, a bit big for an outside linebacker.  Given that height, do you add weight to the frame and try him as a DE?  ESPN ranks Egboh as the #18 defensive end, while NFL Draft Scout ranks him #16.  According to NFL Draft Scout:

Positives: Legitimate NFL frame. … Well-built athlete with the frame to add an additional 10-15 pounds without significant loss of quickness… Uses his long arms well to fend off the blockers and disengage … Team defender who understands his responsibility and fights to contain … Reads the action and has the flexibility to break down in space and make the tackle at the line of scrimmage. … Good strength. … Plays with good leverage despite his height and can push the tackle into the quarterback's passing lane.

Negatives: Bit of a "tweener." Lacks speed off the edge. Lacks the bulk to be moved inside to defensive tackle. … Might be best served as a 3-4 defensive end due to his strength in keeping contain and providing an occasional pass rush. … Good enough athlete to operate in the zone blitz, but lacks the straight-line speed or hip flexibility to make a seamless transition to outside linebacker full-time.

Unfortunately, we have no YouTube footage of the local product.  UDFAs weren't drafted for a reason so I'm not expecting great things, but the size is certainly intriguing.  Bulk him up a bit and you've got quite the hoss down opposite Justin Smith.  Just a thought.