Share All sharing options for: Movinâ on up in the 2010 Draft: How Low can the 49ers Go?

The goal here is to attach a draft pick probability to each combination of SF and CAR win-loss records. To do that, we first need to figure out the draft position that any NFL team can expect to have given their record during the previous season. For the sake of your brain, I'm not going to go into any detail here. Just believe me when I tell you that, based on the 2004-2008 seasons and 2005-2009 drafts, here are the expected draft positions associated with every possible NFL win-loss record (excluding ties):

Based on this table, if the 49ers go 10-6 this upcoming season, for example, they can expect to have the 24th pick in the 2010 draft. Obviously, because not all picks are represented in the table (e.g., there's no #13 in the picks column), there's some variability around the expected pick. However, #24 is the pick the Niners are most likely to have given the NFL's team records and associated draft positions over the past 5 seasons.

In a must-read post a couple of weeks ago, briandean talked about the draft pick value chart that NFL GMs adhere to - with varying strictness - when talking turkey about trading picks. This chart enables us to attach a value to each expected pick in the above table. For example, the 24th pick in the draft is worth 740 points according to the chart. Therefore, if the 49ers go 10-6 in 2009, then they'll have 740 points to work with should they choose to deal the pick.

Of course, the assumption here is that the 49ers won't just deal their pick to move up in 2010. Rather, they're likely to trade their pick and the Panthers' pick in exchange for a lower (higher?) pick. So, for example, if SF goes 10-6 and CAR goes 9-7, then the Niners would likely use their 740 points plus the Panthers' 800 points to move up in the draft. And what pick would SF be able to trade for using those 1540 draft pick points? Well, according to the chart, the #7 pick is worth 1500 points, so, if we assume a 40-point surcharge for moving up, then packaging their 21st and 24th picks in the 2010 draft would get the 49ers the 7th pick overall.

This kind of "what if" exercise can be done for any combination of SF and CAR records in 2009. In fact, it can be done for any combination of records for any two teams in any season. Luckily for you, I've already done all the heavy lifting. Below is a chart I created that shows the lowest (highest?) possible pick SF can acquire given (a) the draft picks associated with SF's and CAR's 2009 records, (b) the draft pick values associated with those draft picks, and (c) the assumption that SF will package both picks in a deal to move up in the 2010 draft: 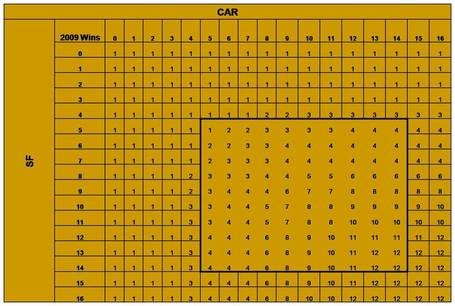 To read this chart, just pick out win totals for SF and CAR, and then look at the number in the box where the two win totals intersect. For example, 2 wins for SF and 14 wins for CAR corresponds to the #1 overall pick being the lowest (highest?) possible pick that the 49ers can acquire were they to do a package deal.

Before going into the odds of any specific pick, let me just point out a couple of interesting things about the information displayed in this chart. First, you'll (hopefully) recall that SF went 7-9 last year and CAR went 12-4. If we look at the chart entry associated with 7 SF wins and 12 CAR wins, we find that a mere repeat of 2008 would allow the 49ers to trade up to the #4 pick. The second interesting thing about this chart is that the worst pick the 49ers can possibly get in a package deal is #12. In other words, not even simultaneous perfect seasons by SF and CAR can prevent the Niners from trading into the top 12 if they choose to do a package deal. OK, let me make the point even clearer. Simply by having two #1s, the 49ers are guaranteed the possibility of a top-12 pick regardless of their 2009 record. Now that's flexibility.

Based on the above chart, you can go through any combination of SF and CAR wins, and see what pick the 49ers can acquire in a package deal. Feel free to do so in your spare time (or on bathroom breaks). For those of us with a life - I'm certainly not included in that - our resident mock draft guru, Dumb Luck, has summarized below the likelihood and odds against the Niners being able to acquire a specific 1st-round pick in 2010 via a package deal:

The first obvious thing that jumps out is that, no matter what happens to SF and CAR in 2009, it's almost even money that the 49ers will be able to trade for the #1 overall pick in a package deal. In other words, flipping a coin right now would basically be just as accurate as actually, you know, playing out the 2009 season in terms of predicting whether or not SF can get the #1 pick in a package deal. The second interesting bit of information in the table is that the Niners have a slightly better shot of getting a top-2 pick in the 2010 draft, which guarantees them Bradford or McCoy if those two 2 QBs - for the sake of argument - are projected as the top 2 picks next year. Finally, notice that SF has almost a 75% chance of moving into the top 5 via a package deal. When translated into odds, the 0.34 associated with a top 5 pick means that the odds are actually 3 to 1 in favor of the Niners.

For those who weren't around this weekend, Bonzo the Idiot Monkey is Cold Hard Football Facts' resident mock draft guru. Being a close relative to humans, he's able to engage in some low-level reasoning. For instance, based on the information given to him by his handlers, Bonzo was able to deduce that Matt Stafford would be selected by the Lions. In contrast, Dumb Luck got that pick wrong because, being a mere calculator, he wasn't equipped to incorporate that kind of information into his prognostications.

Why am I bringing up Bonzo? Well, it's because Dumb Luck's table omits a couple of basic assumptions that only a reasoning creature could use to his/her advantage:

So, being the low-level logician that he is, Bonzo's table is a little bit different from Dumb Luck's because he focused only on summarizing the possible picks associated with reasonable expectations about SF's and CAR's records in 2009. Specifically, here's Bonzo's table, which only looks at the bold, inset 5-to-14-wins box of the chart I presented earlier:

Comparing Bonzo's table to Dumb Luck's, we can see how having reasonable expectations about SF's and CAR's records affects the likelihood that the Niners can acquire a given 2010 1st-round pick in a package deal. First, the most likely obtainable pick changed from #1 to #4. Furthermore, the Niners went from having an even shot at the #1 pick in Dumb Luck's table, to having a 99-to-1 shot in Bonzo's table, which makes the #1 pick now the least likely of the top 12. This no doubt is due to the fact that almost all record combinations in which SF can get the #1 pick are associated with either SF or CAR already having a pick in the top 5. Second, if as before we assume for the sake of argument that Bradford and McCoy are going to be the top 2 picks in the 2010 draft, then Bonzo (about 16 to 1) is far more pessimistic than Dumb Luck (about even money) with respect to the 49ers getting either QB by virtue of a package deal. Finally, although SF still has a likelier-than-not chance of trading into the top 5, the odds against their ability to do so doubled given Bonzo's reasoning.

Before wrapping things up, I'd just like to caution those of you out there who might want to consult SF's and CAR's strengths of schedule (SOS) in 2009 when experimenting with possible record combinations. In other words, I would advise against paying any attention to the fact that, based on their opponents' 2008 records, SF has the 7th-easiest 2009 schedule, while CAR has the 2nd-most difficult. Here's why: A team's SOS before the season, which is based on its opponents' previous-season records, has no practical relationship with its actual SOS or its actual win-loss record once the season has played out. In other words, just because the Panthers have the 2nd-most difficult 2009 schedule as of right now, don't think for even one second that (a) their schedule is actually going to be that tough, if tough at all, or (b) their 2009 record is actually going to be any worse than if they had the easiest before-the-season SOS. Basically, it turns out that we can't predict anything about CAR's 2009 SOS or how many games they're going to win in 2009 based on what their 2009 opponents did in 2008.

Just in case you don't believe me, or you don't want to just trust me on this, here is a table that shows the correlations between before-the-season SOS, actual SOS, and actual win-loss record for each of the past 5 seasons:

For the non-stat folks out there, an asterisk (*) in the table means there's a 95% likelihood that the given relationship is real (i.e., it's not a statistical mirage), while two asterisks (**) means there's a 99% likelihood. Also, see here for my previous description of what the direction (+ or -) and value of a correlation mean. If these last two sentences made your brain explode, just look for asterisks and numbers farther away from 0 (provided you can still read despite brain detonation).

As the table shows, 2008 was the only season (of the last 5) in which a team's actual SOS was related at all to its before-the-season SOS. Of course, even this 2008 relationship is pretty useless in terms of prognostication when you consider the fact that a team's before-the-season SOS in 2008 was totally unrelated to how many games it actually won. Furthermore, all those asterisks and bigger numbers in the right-most column, which suggest a consistent statistical relationship between actual SOS and actual win-loss record, are pretty useless as well because we have to wait until after the season to calculate them. In other words, we can't use actual SOS to predict a team's record for the upcoming season because we can't find out their actual SOS until after the season.

Finally, some clever NN readers out there might think it's necessary to adjust these correlations for each team's record in the previous season because (a) the NFL schedule is created, in part, based on where each team finished in the standings; and (b) winning teams one year are more likely to be winning teams the next year. Well, first off, the latter isn't actually the case: The correlation between team wins from one year to the next is not statistically significant. More importantly, though, I tested out this adjustment, and it didn't change the above table in any meaningful way.

Based on everything that I've said in this article, here's what I think is most important to remember between now and the 2010 draft vis-à-vis the Niners packaging their two 1st-round picks: