You hear that? Bears... Now you've put the whole station in danger...

Share All sharing options for: You hear that? Bears... Now you've put the whole station in danger...

It’s official; I have a new favorite rookie among the Niners. Now some of you may be thinking "ME TOO! CRABZ RULEZ!!! HELLLYEAAAAAAHHHHH NINERXZZZ BRAAAASSSSS!!!!!!1!1!!!1!" and don’t get me wrong, I love me some Crabs. However, for now let’s take a step away from crustaceans and into the mammal world; it’s a Bear market and I’m buying! 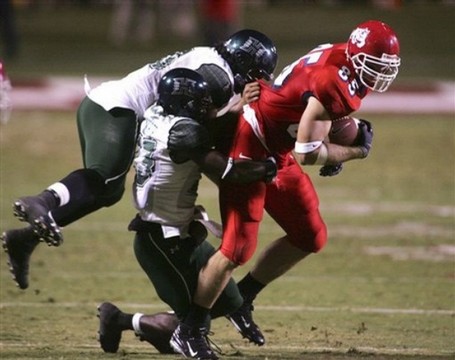 Bear Pascoe, the 6’5", 251 lb TE from Fresno State, the 184th pick in the 2009 NFL Draft, picked by the San Francsico 49ers in the 6th round has caught my eye since he popped on the big board. First off, he has one of the best football names in the NFL. As a last name, Pascoe just sounds like a smash-mouth, hard nosed, I-have-calcium-deposits-in-my-forehead-so-when-I-play-football-I-bleed all-over-my-face kind of name. As a first name, well, the last Bear involved in football had pretty good success, and the name itself just lends itself to countless puns, movie quotes and fantastically corny jokes.

But besides an aesthetically pleasing name, what does the Bear bring to the table? Why has the Bear become the top man among the rookie class? His ability to steal pic-i-nic baskets? His soft, yet protective fur? His impact on the financial market? Let’s get down to the Bear-Necessities.

Bear was born February 23rd, 1986 in as McKenna Sean Pascoe, but was nicknamed Bear as a toddler by his parents because of his size, and because he "came out growling" (read as: born to play football). He grew up living a physical life, raised on a cattle ranch, where he learned how to work a rope and lasso and eventually became a champion cattle roper (He won a diesel pick-up truck as a 15 year old in a roping competition. His older sister had to drive it home for him - nobody laughed).

In high school, Bear lettered in track, competing in the shot-put and discus, and played as the QB at . In his senior year, he accumulated 1,851 yards and 16 TDs in a season where he was selected the 2003 East Yosemite League (EYL) Player of the Year. In 2002, he lead his team to the EYL title, the same year he was recognized as a First-Team All EYL for basketball. For a career, he accumulated nearly 3,500 total yards and 33 total TDs as a QB. Oh, and did I forget to mention that he also started as an outside linebacker? This guy is just a born athlete! Imagine the unexpectedness of a gadget play with Bear throwing a pass to Crabs! I think I just peed a drop or two from excitement. 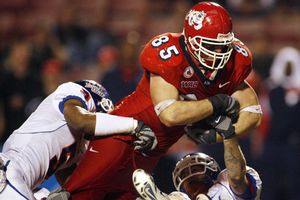 He was recruited by to be a QB, but they converted him to a TE when they saw his strength, size, and blocking ability. He was red-shirted freshman year, yet received the scout team offensive player of the year award for the team (read as: hard worker). From then on, he became a semi-regular part of the offense, playing in almost every game from that point on, and eventually moving to the regular starting TE role for by 2006. Fresno State turned Bear into an offensive threat; that 2006 season, he averaged 14 yards per catch, had at least one reception in every single game, including a 75 yard TD reception against Hawaii and a seven-reception, 87 yard game against San Jose State (not incredible, but pretty good for a 251 lb TE). In 2007 he finished second on the team in receptions (45) and yards (553) even though he missed one game due to injury, and landed on the First-Team all-WAC list.

thought very highly of him. According to their website:

…projected by most college preseason magazines as one of the top tight ends in America ... one of the hardest working players on the team ...  has developed into a major offensive weapon and big-play maker... has shown big-play capability … a very smart football player who has made immediate contributions as a blocker, receiver and special teams star early in his career ... one of the strongest tight ends ever to play the position at Fresno State and as a devastating blocker on the line ... will go down as one of the best to ever wear a Bulldog uniform. 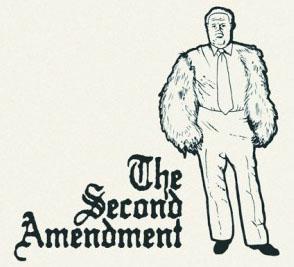 The Niners were lucky to get Bear when they did. According to the SF Chronicle (link forthcoming) the Bears (HA) wanted to draft him with their 199th overall pick, and that would have been too perfect, so thank goodness we threw a wrench into that

I’ll be the first to admit I had no knowledge of this guy prior to him being picked by the team, but I can see why Singletary chose this man. He is big, a hard worker (whether playing regularly or not), is dynamic and is just an all around athlete. Many analysts are expecting him to be a pure blocking tight end, but after reading more about him, gauging his attitude and how he was used at Fresno State, I could see him being an every-other-game receiver, definitely in short yardage or goal-line situations. But seriously, the guy ropes cattle, was the hardest working scout-teamer at as a freshman, can whip out the big play, and would rather knock tacklers over instead of running away from them. This was a great pick, especially in the 6th round, to fill the void that Billy Bajema left when he went to .

To put a nice little bow on this Bear-love-fest, here is my favorite quote about Bear from the Mile High Report:

As a ball player, Pascoe is said to lack subtlety. He lacks top-end speed. He doesn't care, either. He isn't interested in running away from linebackers and defensive backs. He prefers just running them over. Gifted with excellent hands, a nasty football demeanor and top skills as a blocker, McKenna Bear Pascoe is the total package for those who are looking for a tight end who's both ravenous and skilled.

For those still interested in more on Bear, I included all the scouting reports I could find on the player:

Strengths: Good frame for the position. Good bulk and overall strength as a blocker. Uses his hands and leverage well as a blocker and provides as much effort as a blocker as he does as a receiver. Puts smaller defenders on their back and plays through the whistle. Able to reach linebackers at the second level. Former quarterback who understands where the holes are on the defense. Solid route-running in the short to intermediate zones. Uses his body to shield defenders. Natural hands catcher who can who fight for the ball and can track over his shoulder. Bullish runner who fights for extra yardage.

Weaknesses: Not an elite athlete in the Kellen Winslow mold. Lacks the straight-line speed to threaten the seam against NFL talent. Takes a few steps to get to top speed. Flashes the ability to make tough receptions with defenders draped over him, but needs to continue to work in this area. Leans forward when blocking, and needs to improve his balance facing stronger defenders. Defensive backs use their quickness to elude him while blocking in the open field.

"Good frame for the position. Good bulk and overall strength as a blocker. Uses his hands and leverage well as a blocker and provides as much effort as a blocker as he does as a receiver. Puts smaller defenders on their back and plays through the whistle. Able to reach linebackers at the second level. Former quarterback who understands where the holes are on the defense. Solid route-running in the short to intermediate zones. Uses his body to shield defenders. Natural hands catcher who can who fight for the ball and can track over his shoulder. Bullish runner who fights for extra yardage."

“Once he secures the pass he immediately looks for a defender to punish, and he knows how to lower his shoulders and deliver a forearm blow.  Bear is a big target that can be a devastating blocker once his hands are in place… But he's not incredibly athletic, and his aggressive play style can work against him when he's asked to block downfield."