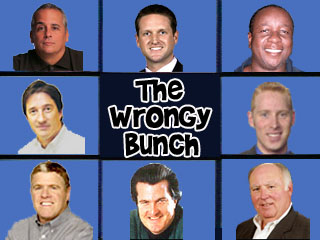 Early yesterday we rolled out grades for the 49ers draft overall and by player.  Naturally these are very arbitrary given that they have yet to don pads for the 49ers.  They could do nothing, they could be superstars.  However, it's practically required for a team blog to grade it's draft results.  I'm sorry, I don't make up the rules.  I forgot earlier, but big thanks to wjackalope for a feeee-nomenal graphic for this.

Accordingly, I thought I'd also go through and find some of the various draft grades given to the 49ers.  It's amusing how all over the place some of the grades can be.  We're sticking with primarily national folks as a baseline.  Due to length, most are after the jump.  Thanks to Dre for the FanShot of the Yahoo grade average article as I made sure to include those grades.  One reason to take these with a grain of salt (among many other reasons), is because of lazy comments like this from Clark Judge under "Biggest Losers":

The San Francisco coaching staff. Good luck with Crabtree, fellas. At least when Terrell Owens was a rookie, he was humble. Try telling Crabtree what to do.

GRADE: B+
Obviously the 49ers hit the jackpot with wide receiver Michael Crabtree falling to them at No. 10. Running back Glen Coffee gives the 49ers a nice one-two punch with Frank Gore. Getting inside linebacker Scott McKillop in the fifth round was a steal. Bear Pascoe is one of the best blocking tight ends in the draft, and the two LSU kids (Curtis Taylor and Ricky Jean-Francois) were great pickups in the seventh round.

Best pick: WR Michael Crabtree, Texas Tech (first round, No. 10 overall)
Worst pick: ILB Scott McKillop, Pittsburgh (fifth round, No. 146 overall)
Bottom line: While San Francisco would have liked to address needs on the offensive or defensive fronts with its first pick, it's impossible to fault the 49ers for taking in Crabtree, one of the top three players in this year's draft who fell to them at No. 10. Making it an even better decision is any concerns about Crabtree's character or how he interviewed leading up to the draft should be erased with Mike Singletary at coach. While the QB situation in San Francisco is less than ideal, Crabtree will allow the 49ers to see if they have the right QB in-house as he should only bring out the best in the existing signal-callers. As for Day 2, RB Glen Coffee is a good change-of-pace runner and McKillop is limited but solid versus the run and should contribute on special teams. Finally, there's nothing wrong with taking a chance on developing QB Nate Davis in Round 5.

Positive: Landing Crabtree without moving up.
Negative: Going with a running back with their second pick.
Bottom line: B-.
It looks like a draft that might only produce one starter in the next year or two, but Crabtree could be a great one. Coffee was a head-scratcher in the third round, considering the plethora of needs in other areas for the 49ers. If Nate Davis’ learning disability can be overcome, he could be a steal in the fifth round.

GRADE: C-
WR Michael Crabtree fell to them and they grabbed him. They did not have much to work with after that, though, and they may not have done much with what they had. RB Glen Coffee shows few measureable NFL skills, does not approach what they have in Frank Gore. LB Scott McKillop is essentially Coffee's equal, though he excelled in combine workouts. Looks like a journeyman. QB Nate Davis joins a carousel, decent value in fifth round.

QB Nate Davis probably is only practice squad material at this point, and TE Bear Pascoe lacks the athleticism to be more than a blocking specialist. LSU safety Curtis Taylor was underrated after an injury-marred senior season, but DL Ricky Jean-Francois has always been overrated. One pick doesn't make a draft.

Everyone referred to Texas Tech receiver Michael Crabtree as a "diva," but on the field he was the best receiver in college the past two seasons with 41 TD receptions while averaging 120.3 yards per game. The 49ers are definitely not worried about his foot surgery for a stress fracture. GM Scot McCloughan made a solid decision in swapping his second-round pick for Carolina's first-round pick next year.

The 49ers took a flyer on Ball State quarterback Nate Davis, who has dyslexia, in the fifth round. Davis passed for 56 TDs vs. 12 INTs in his college career. Davis has an unusual grip on the football — he never holds it by the laces. Alabama running back Glen Coffee has a strong upper body, but he has to learn that he can't take on tacklers at the NFL level. Pitt linebacker Scott McKillop could be a steal in the fifth round. He has 211 solo tackles in 25 starts for the Panthers. Grade: B-

I'm just not enamored with what they did.

Grade: A+
While everyone will rightfully focus on the selection of wideout Michael Crabtree with their first selection, the 49ers' ability to add a first-round pick in next year's draft (from Carolina), as well as fill holes at essentially every position, was the key to their draft. For a young team like this, depth is often the critical missing element toward turning a struggling team into a division winner. The 49ers added many of the pieces in 2009 to accomplish that goal with underrated talents at running back (Glen Coffee), linebacker (Scott McKillop), safety (Curtis Taylor) and defensive line (Ricky Jean-Francois). A young quarterback with legitimate talent in Nate Davis and a blocking specialist to pair with Vernon Davis in Bear Pascoe only made this draft that much more impressive.

For a team that hasn't picked a great receiver since Terrell Owens, Michael Crabtree's a welcome choice. He's 6-2, 215 pounds ("a faster Boldin,'' one personnel man told me last week) and he finally gives the 49ers some respect in the passing game ... Glen Coffee may play more than you think if Frank Gore can't hold up.

They were fortunate to get Crabtree, who will make life easier for the quarterback. The rest of their draft did not bring much help. This is a rebuilding team with plenty of holes.

And there you have it.  Waaaaaay too many draft grades.