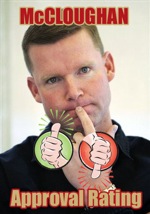 During the regular season, we ran a weekly post asking whether or not you approved of the job Mike Singletary was doing as head coach. Obviously it wouldn't influence anybody, but it's useful to know how the readers feel about the head coach. In the case of Mike Singletary, there really was little doubt about the results. The most recent poll gave Singletary a 99% approval rating with only 1 No vote. That's some love people.

I've decided to add an approval poll for GM Scot McCloughan. This will not go up every week. Rather, we'll do it at major junctures of the offseason and regular season. This first one makes sense since we're post-draft and the next mini-camp is starting this weekend. We'll probably do one again in June, one at the end of training camp, and a few others throughout the year. Any suggestions for further frequency of the poll?

Aside from the Michael Silver Yahoo article, there has been a bit of a divide on McCloughan's approval among readers. If I had to predict, I'd say most people support the job done by the GM so far. After the firing of Mike Nolan, McCloughan is definitely next in line if things don't improve. However, I don't think that necessarily puts him on the proverbial hot seat. Maybe more of a warm seat.

This offseason produced some quiet dividends in free agency. Nothing super splashy like the Justin Smith or Nate Clements signings of years past. However, they were solid moves to shore up some depth and need issues. The team got lucky in the draft as Michael Crabtree fell to them. They dealt for a 2010 first round pick and they made some picks that excited some and left some scratching their head.

So, do you approve of the job Scot McCloughan has done as general manager? Feel free to use your own measuring stick for approval. And of course, feel free to comment about why you voted the way you did.

FOOCH'S UPDATE: Thanks to wjackalope for putting together our new approval rating graphic.