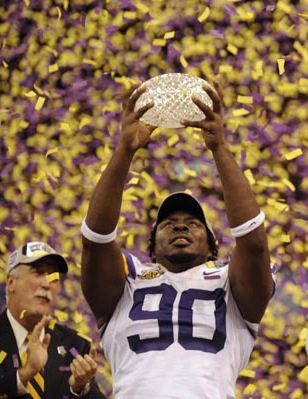 When taking an initial look at an incoming rookie class, those who know little about these new players (like myself) have to do a bit of digging to learn more about the newest additions to the team. What kind of personality does the person have, what is their style of play, etc. Some players you instantly gravitate towards because of a quirky name (Bear, Coffee) and my next rookie profile is no different. Ricky Jean-Francois (or RJF, I’m not typing that name 20 times), a hyphen name from the Bayou, and what was initially considered the Worst Football Name of the draft by Fooch (LINK). Sure, his name doesn’t compare to Bear Pascoe (but then again, what name does?), but RJF goes beyond a Ragin’ Cajun, triple word score name. This man is a mean animal who knows how to do one thing – hit. The problem is, hitting might be the only thing he knows how to do… Come with me won’t you, on a look into the life of RJF.

Rickey Barkley Jean-Francois (RBJF??), also known as "The Freak" for his uncanny workout ability was born November 23, 1986 (ugh, again, players younger than me… how depressing) in . His high school career was quite impressive; upon graduation he was the number 1 defensive line prospect in the state of , and the number 3 D-line prospect in the nation. His senior year was a statistical dream for RJF, registering 93 tackles, 15 sacks (including 6.5 in one game, a record), three interceptions, six forced fumbles and three fumble recoveries. In 2004 and 2005, RJF was named the Dade County Male Athlete of the Year, the only person to win the award twice in its 49 year history. He also won the state championship in shotput and discus, recording the nation’s third best toss in 2005 in the shot put with a throw of 65’ 5.75". So, needless to say, the man has strength.

He chose to go to LSU on a full football scholarship, and was red-shirted his freshman season in 2005. His 2006 red-shirt freshman season had RJF seeing action in 12 of the 13 LSU games, and earning a spot on the Sporting News’ first-team Freshman All American list, recording 27 tackles, 5.5 tackles for loss, three sacks, a blocked kick, a fumble recovery, and broken-up pass. RJF was touted to be the all-star replacement for Glen Dorsey once Dorsey went to the NFL. DE Tyson Jackson on RJF:

"Nobody can replace Glenn Dorsey," defensive end Tyson Jackson said before the 2008 season, "but a guy like Ricky Jean can come in and be the man." 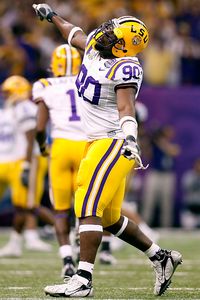 After the Jump - More on the Ragin' Cajun with the hyphen.

He was looking like he would be the future of the defense, but then his off-the-field life caught up with him. His 2007 sophomore season, RJF only played in two games after the Tigers gave him a 12-month suspension for an "off the field issue," allegedly for academic issues. However, instead of hiding or transferring, RJF stayed with LSU and practiced with the team, filling in on scout teams to prepare the offense as best as possible. At the conclusion of the regular season, RJF was reinstated, just in time for the SEC championship, and the National Championship game vs. . In the National Championship, RJF earned Defensive MVP honors after blocking a kick, a massive play that helped the Tigers win the BCS title.

2008 was a down year for RJF, especially after such a dominant comeback from suspension with expectations sky-high. He started 6 of 11 games in his 2008 junior season, missing most of the games because of a late-season groin injury, including contests against and . As most of you know, RJF got a good amount of attention based off of comments made about Florida QB Tim Tebow. He told the Orlando Sentinel that if LSU defenders had a chance to tackle Tebow on Saturday in , they would try their best to "take him out of the game… Every lineman wants to get a good hit on a Heisman Trophy winner."

He tried his best to do some damage control, stating in a written statement released by LSU:

"We never go into any football game trying to hurt a player from the other team… We have great respect for Tim as player and a competitor. By taking him out of the game, I meant as a defense we are going to try to make him ineffective. I'm sorry that my initial comments were interpreted another way."

From then on, RJF was not seen in the best of light by his head coaches, who were upset with him because of his comments about Tebow. At the end of his Junior year, he decided to forgo his senior season and enter the NFL draft. I did my best to find a reason as to why he entered the draft, but couldn’t find anything concrete. The best I could find was a random blog comment, stating that he was going to be academically ineligible for the upcoming season. It is something that would make sense, but obviously take that comment with a pound of salt.

Here is what some scouting sites have noted about RJF:

Positives: Tall, but can still use leverage to bull rush his man into the pocket. ... Violent with his hands, able to rip off blocks inside to make plays on the ball. ... Impressive in his ability to stand his man up and discard him to either side. ... Rarely gets moved when facing a one-on-one block. ... Moves fluidly down the line, able to eat up a wide running lane with his length. ... Recognizes the screen. ... Imposing figure when closing, will work toward the quarterback if he's in sight. ... Impacts passing lanes and can block kicks using his height and reach.

Negatives: A bit lean for some NFL defensive coordinators, but not considerably light. ... High pad level allows double-team blocks to sweep him aside. ... Inconsistent initial quickness off the snap and he guesses the snap count at times. ... Could hustle and chase the ball more often. ... Not quick enough to keep off a cut block, but recovers well. ... Does not consistently play to his timed speed, lumbering in space and lacking elite stop-start quickness.

Compares To: JON BRADLEY, -- Jean-Francois has exceptional playing strength, but has failed to live up to his lofty press clippings. He has had academic issues, off-field problems and an overall inconsistent performance on the field. He can easily shed blocks and power through the line, but lacks focus. He runs his mouth more than Warren Sapp, but with 56 tackles in 25 games, it is obvious he can't back up his bold comments. Unless someone feels that they have patient veterans to mentor him, it is doubtful that he will live up to his own opinion of himself.

The Good: Has a tall frame and good length. Does a nice job getting off the snap count with good burst and handles linemen at the point of attack. Is very patient as a pass rusher and consistently finds the ball and sheds blockers laterally. Displays great closing speed when he gains a step and looks balanced and fluid moving down the line. Exhibits the ability to defeat slide-down blocks.

The Bad: Lacks lower body strength and struggles pushing the pocket as a bull rusher. Plays way too high at times and takes too many plays off. Struggles getting his hands inside on defenders. Needs to win with his first step.

And a few pictures of RJF in action... 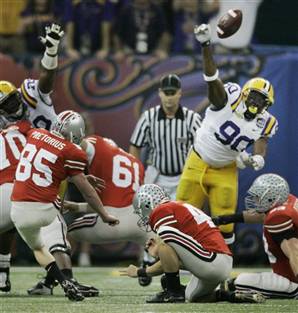 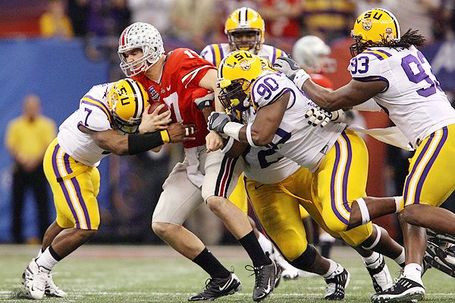 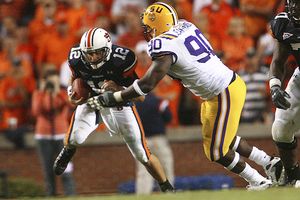 Thanks to rivals.com, NFL.com, lsusports.net, and espn.com for all of the information used in this story. If you have videos of him, please post them in the comments: I don't have flash on my work computer, so I couldn't tell which videos are quality and which ones are BS.