Late tonight Santa Clara city officials signed off on the general framework of a deal to build a new stadium for the 49ers in Santa Clara.  While this is a big step, the bigger step is passing the required ballot measure at some point in 2010 (rumored to be in March).

The final proposal was not made public, but will be released May 29.  The article linked above says that the city council will meet June 2 to discuss whether to officially back it.  Of course, if they've come to terms at this point, I don't see why they wouldn't back it.  Santa Clara has posted some details in the past, which you can view to see where things potentially have gone.

According to city officials, Santa Clara would conceivably be contributing no more than $90 million towards the $850+ million stadium deal.  That $90M would likely come through redevelopment funds and a tax on hotel customers.  The local mayor has indicated in the past that the team would own the stadium and lease it to the 49ers.  Given how much the 49ers appear to be kicking in, I'd like to think the lease terms are somewhat favorable.

In the meantime, I'd imagine the city of San Francisco will have something to say about all this.  What that is exactly, I do not know.  The City hired Carmen Policy to lead their efforts in keeping the 49ers in town.  We'll see if that pays off in the end.

Personally, as long as the team is in the Bay Area I'm fine.  Well, that and retaining the name San Francisco 49ers.  Either way, this process is far from over.  If Santa Clara gets a good deal on this it would help with voters.  However, when you're relying on voter support, it's always a tricky issue.  Then there's also the fact that the NFL's G3 stadium fund is supposedly empty (thank you Jets/Giants!).  Money doesn't grow on trees so we'll see how much debt the 49ers have to deal with to make this dream a reality.

After the jump we've got a bit of a mock-up from SupportOurNiners.com. 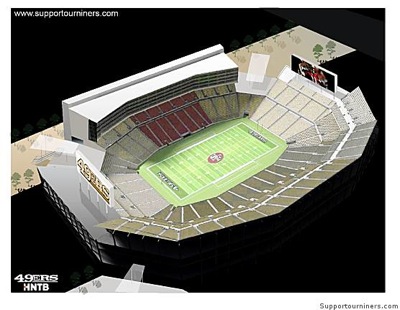