The Best Part of Waking Up is Coffee in Your Cup

Share All sharing options for: The Best Part of Waking Up is Coffee in Your Cup 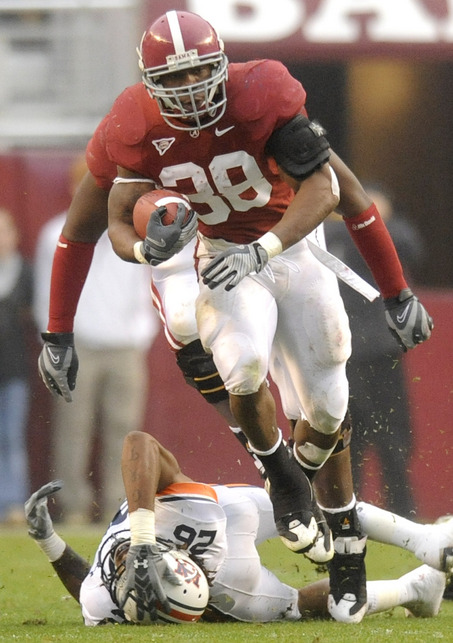 When the 49ers traded away their 2nd round pick this year to Carolina, a lot of people had the same feeling. "Well, the next pick better be fan-[site decorum]-tastic." When it came to the 74th overall pick, the Niners were on the clock. Maybe we see a nose tackle drafted here... Or a DB, someone to help over the top. Ok... There's Goodell... And the Niners select... A running back? Glen what? Like the dude from The Green Mile? REALLY NINRRSZZZ BRASSZZZ?!?!??!

I kid, I kid, but not entirely. Glen Coffee, picked 74th overall in the 3rd round, was a pick that surprised a lot of people, myself included. Sure, having a backup to Gore is important, but even with Robinson and Clayton was it necessary to take a 3 star RB with their 3rd round pick...?

However, when I began to take a look at him, my eyes were opened a little bit. Sure I heard of him, and watched him bowl over some players during college, but I didn't really get to know Glen Coffee the man. Thank goodness for the Internet, and in a few minutes, I began to see why he is a good fit within this organization.

Check out after the jump for the life and times of Glen Coffee...

Glen was born May 1st, 1987 in Fort Walton Beach, Florida. His father worked for the military, and as such he spend most of his early childhood outside of the United States, more specifically in Saudi Arabia. Even at a young age, and outside the US, he still had a passion for football:

"Growing up in Saudi Arabia, there weren't many opportunities to play organized sports, but it didn't stop me from getting my football fix. That is all we did in our spare time: play tackle football."

By the age of nine, he was back state side, with a pro-football passion in his heart. He was a born running back, but back in his high school days he was less of the bruiser he is now.  And yet he always wanted to find the hit instead of shifting around tacklers...

"I've never really been a shifty guy, and I know I have to make up for my size. So when I'm running the ball, I want to make sure I'm the one delivering the blow."

In high school, at Fort Walton Beach High School, he had a break-out junior year with 850 yards rushing on 132 carries and 18 catches for 275 yards and 11 touchdowns.

His senior season was even more impressive; 1,886 yards rushing, 350 yards receiving and 29 touchdowns as a senior, leading his team to the Class 4A District 2 title and a regional championship game appearance. He fielded offers from Alabama, Louisville, Southern Mississippi, Central Florida and Middle Tennessee State. However, when all was said and done, Coffee decided to go to Alabama, stating simply;

"I just always wanted to play in the Southeastern Conference, and Alabama was my only SEC offer."

His freshman season (2005) at Alabama had him seeing action in 12 Crimson Tide games. He had 48 touches during the season, gaining 179 yards rushing, along with 91 yard off of 8 receptions. Most of these yards came in a 75 yard rushing game in a 37-14 victory over South Carolina. He was primarily a back-up behind Kenneth Darby (now a back-up on the St. Louis Rams) and Jimmy Johns.

Near the end of the season he developed a sports hernia that required surgery, hampering his off-season training ability. As such, he injured his knee during the pre-season, and was forced to red-shirt and sit out his sophomore season (2006). Getting such limited action was unsettling for him. That, combined with his parent's divorce near the end of his high school career made him rather unpleasant and unhappy. But in college, he discovered a new purpose,

"For a while, living up here, I was depressed, I wasn't having fun. I wasn't satisfied. There had to be something more, and I found Christ. That put everything in perspective for me."

He discovered Christ through a mutual friend at Alabama, (sorry for the long quote, but I found it all important...)

"Then I met Matt Watson. We became roommates through a mutual friend. And there was something different about Matt. He was also a student-athlete at Alabama-on the track team-but he didn't act like some of the other athletes I knew. After only a week, I knew everything about him and would have trusted that dude with anything.

I watched how Matt lived. He was one of the most pure, on-fire-for-Jesus guys I had ever met. Everything about him was sincere. I knew he had something I had never had or experienced, and I just wanted to know what it was. That was what led me to church with him.

When I started going to church, I started to think in a whole new way. I learned why Matt did the things he did: because Jesus was in him. And once I knew Who my roommate was living for, I experienced a 180 in my own life. I was literally changed from the inside out.

There wasn't a specific event; it was more like it all just finally made sense. I was lying on my bed just thinking, "This is what I have been missing my whole life." It just hit me. I wanted in. I wanted to be a part of the Kingdom. And when I surrendered to Christ, I felt that sense of true love and true happiness."

He worked his way through his red-shirt season with new purpose, and when 2007 came around, with new Crimson Tide head coach Nick Saban, Coffee was part of a two-RB tandem with Terry Grant. He performed very well, earning 76 yards and 1 TD in his first game back in action vs. Western Carolina, and reaching his first collegiate 100 yard rushing game during Alabama's homecoming weekend, rushing for 121 yards on 30 attempts with 1 touchdown against Houston. In his first seven games, three of which he started that season, he gained 473 yards on 110 carries and four TD's.

Unfortunately, Glen was implicated in the 2007 Alabama texbook scandal, when a UA Supply Store employee noticed "questionable charges" in excess of $1,600 for scholarship students. He was forced to miss the final four games of the regular season after being suspended by the university. However, he was able to return for the team's final game of the 2007 season, the PetroSun Independence Bowl vs Colorado, where he rushed for a team-high 72 yards in a Crimson Tide victory.

2008 was Coffee's big season, starting all 14 games for the Tide. He had several big games, the first coming against Arkansas, where he ran the ball 10 times for 162 yards and two touchdowns, including his collegiate career long of 87 yards. He played a pivotal role in Alabama's upset victory over then-ranked-#3 Georgia with 23 carries for 86 yards. The next week Coffee had his best career game vs. Kentucky - 218 yards on 25 attempts, including a 78 yard TD in the first quarter of the game. The 218 yards was the most rushing yards by an Alabama running back since Shaun Alexander in 1996.

Coffee helped the team clinch a berth in the 2008 SEC Championship with a 126 yard, 1 TD performance in an overtime victory over LSU. He had another massive game in the annual Iron Bowl vs Auburn, gaining 144 yards and one more TD. All in all, Coffee gained 1,383 yards on 233 rushes (a 5.9 yards per rush average) with 10 rushing touchdowns on the season, earning a place on the Associated Press's All-SEC first team. With such a successful season, Coffee decided it best to forgo his senior year, and declare for the NFL draft on January 9th, 2009.

Throughout his entire collegiate career he remained a devout Christian, which could be a reason why Mike Singletary was drawn to him, besides his football talent. But that's not all that drew him to Coffee. Here are some of his strengths and weaknesses from across the interwebs:

Strengths: A powerful runner with an ability to explode off the snap, he has the frame and natural strength of the typical power back. He's also a very good blocker and solid receiver.
Weaknesses: Doesn't possess elite speed or fluidity and is not gifted with great vision and patience to create plays.

CBSSports.com (This analysis is AMAZING, so I'll put here what I can, but I strongly suggest checking it out)

Body Structure: Coffee has very good upper-body tone, but is not as muscular looking in his lower frame as the Alabama runners in the past, despite posting impressive weight-room numbers. He has room on his frame to carry additional bulk, but could probably fill out only to 215 pounds before seeing the additional weight start to affect his quickness.
Athletic Ability: Coffee is more quick than he is fast, but shows good explosion and burst coming out of his stance. He attacks the holes with good pad level and forward body lean. He is better as an inside runner, as he does not show that ease-of-movement agility to change direction and locate the cutback lanes without having to throttle down.

So while this Coffee (like the drink, only spelled exactly the same - OK ENOUGH GREEN MILE REFERENCES) has his ups and down, he looks to me like a solid back-up, with potential to carry a major amount of the load somewhere down the line. We'll see if he gets favored early over Robinson and/or Clayton, but as of right now, I'm liking this guy, if for his dedication alone.

Here are some highlight/workout videos that should give you a good idea of the skill, power and talent Coffee brings to the table: