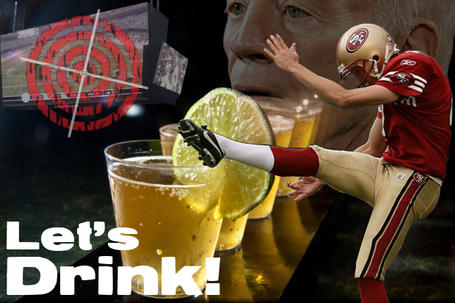 Play along as 49ers punter Andy Lee punts a hole into the Dallas Cowboys stadium scoreboard. What's better than a new $1.2 billion dollar stadium? Well how about a new $1.2 billion dollar stadium where the designers neglected to raise the scoreboard high enough to avoid the leg of the lonely punter. It's not every day you get to see David toss his stone to knockout Goliath. In this case the stone is the punted pigskin and Goliath is the swelling pride of America's Team's super stadium. Luckily for us, there is a drinking game that lets us all play along.

Fooch's Note: Just an amazing idea by bignerd! It's always entertaining to develop solid drinking games. Personally, I'd change "one shot" to "one drink of beer" or something like that. Otherwise, you're going to be passed out rather quickly, wouldn't you say? Or maybe that's the point given that it's preseason. Also, I changed the title to "Drinking Game" instead of "Shooter Game" so everybody's a little more clear on it. Enjoy...

The rules are simple. You need a shot glass and the drink of your choice. If any of the below happens during the broadcast of the 49ers vs Cowboys preseason game this Saturday than raise your glass and shoot the drink down.

1. One shot if the broadcast plays the clip of Titan's punter A.J. Trapasso hitting the scoreboard.

2. One shot if the broadcast plays a clip of Andy Lee hitting the scoreboard with a punt during pre-game warm ups.

3. One shot for every time the broadcast cuts to a shot of Jerry Jones just before an Andy Lee punt

4. One shot for every time Andy Lee punts the ball into the scoreboard.

5. One additional shot if the 49ers coverage team didn't even bother to pursue the kick knowing it was going to hit the scoreboard.

6. One shot if the broadcast cuts to Jerry Jones' uneasy face after Andy Lee punts the ball into his scoreboard.

8. One shot if any broadcaster makes an analogy between the new Cowboy Stadium and the Death Star.

9. One shot if Andy Lee is interviewed on the sideline during the broadcast and asked about punting the ball into the scoreboard.

10. One shot if any 49ers fan is spotted in the broadcast wearing an Andy Lee jersey.

11. Dallas punter Mat McBriar will be shot for hitting the scoreboard.

Thanks Fooch for the addendum of taking one drink instead of one shot, if you're not a hardcore drinker and want to be conscious before halftime.

In light of the new "Dallas do over" rule I thought it was appropriate to add one more rules to the list. (can also be called the "Jerry Jones is Roger Goodell's daddy rule")

12. One shot (or drink) if the broadcast explains the punt "do over" rule to the audience.