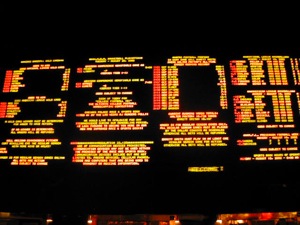 Earlier this week I posted the various odds that Bodog.com had developed for the San Francisco 49ers and the NFC West.  MontanaPass had a great question asking about the origination of these odds.  Well, thanks to Jimmy Shapiro over at Bodog, we were fortunate enough to have the opportunity to email some questions related to these odds.  Jimmy set up an email interview with Richard Gardner, Bodog's Sportsbook Manager.  Before we get into the Q&A, here's a rundown about Mr. Gardner.

As Bodog put it, Gardner works with book managers behind the scenes with reams of mind-numbing statistics and complicated mathematical calculations, carefully crafting Bodog’s most generous offering of diverse sports betting lines.  From NFL odds to MLB match-up propositions; from PGA head-to-head betting and everything in between, Gardner is widely considered to be one of the sports betting industry’s best bets.  Gardner knows the Bodog business model inside and out – having helped to develop several hugely successful creative marketing campaigns, as well as numerous customer service policies and procedures that are still in place today.

Gardner’s been known to sink his teeth into books about statistical theories and he does on occasion enjoy downing the occasional single malt with this book making buddies.  It should, however, go without saying that Gardner has played an integral role in making Bodog the biggest online sportsbook in North America – and why it has quickly become a mainstay and go-to-source for North American sports media.

After the jump, Richard answers our questions about the odds surrounding the 49ers and the rest of the NFL...

Fooch: How do you develop your odds?  In particular, could you give us an idea of the differences in developing odds to win the Super Bowl, weekly game odds and then individual player proposition odds?

CG: The odds to win the Super Bowl are created the day after the previous Super Bowl so with those odds there is a little more guess work involved.  With out the schedule being released we look at where a team finishes to take a guess at strength of schedule and then factor in how they did the season that just completed, whether the momentum was moving up or down, and how bettors have liked the team down the stretch.  We will also make a guess of possible player movement, but this is only a small consideration.  We then combine these factors to come up with the odds, and once the odds are up we let bettors dictate through there bets which way to move the odds.

For a weekly line we will look at any recent match ups between the teams, how the teams match up in key areas as well as looking at previous betting trends on the two teams.  For week 1 lines we will look a little at pre-season play, but this not as useful as we would like.

For individual player projections we generally look at how a player has done over the last three seasons and any changes to personnel that will help or hinder them in their performance.  In addition we will analyze any coaching and philosophical changes for the organization, and then take in to consideration bettor psychology as the final ingredient for compiling the lines.

Fooch: In conjunction with the above question, statistical analysis has taken a big step forward in sports with the development of sites like Baseball Prospectus and Football Outsiders, among many others.  In developing your odds, do you look into some of these alternative analysis options?  Or do you stick to more traditional cues?

CG: We look at a number of analytical sources both the weekly lines as well as player projections.  With the advent of more information available to the public we like to look at a wide variety of sources, although for the final line we do favor some traditional analysis.

Fooch: It's easy to pick the Patriots to go to the Super Bowl.  At the same time we always hear about sleepers each season.  Is there a particular team getting a lot of action that might surprise people?

CG: One team in the NFC that is getting a lot of sleeper love right now would be the Seattle Seahawks.  I think that people are looking at the NFC West as a winnable division and seeing the Seahawks as this years Cardinals.  In the AFC a lot of people have been betting the Cincinnati Bengals, but I do not see that one myself.

Fooch: Do you think the market of a particular team affects whether more money comes in on them either in proposition bets or weekly game bets?  For the NFL, do the NYC teams and the Cowboys see more action than other teams?

CG: I think there will always be teams (like the ones that you mention) which will draw extra handle, but more important than how big a fan base are how many games a team is winning and how great is an offense.  Bettors love to bet on the teams that score a lot of points so from that standpoint the Patriots and Saints the last couple years have been heavily bet on.

Fooch: Your NFC West odds would indicate a finish of Arizona, Seattle, SF and St. Louis.  Based on your odds (and the lack of respect for the NFC West in general) would you say it's probably a tough call on who will finish where (aside from the Rams in last)?

RG: I would agree with that although bettors have created a little separation between for the Cards and Seahawks from the 49ers in their minds. I think the Crabtree situation has cast the 49ers in a negative light not having their first round pick on the team to help out where as the Seahawks have Aaron Curry and were able to address their biggest need in signing T J Houshmandzadeh.  The Rams are definitely seen as the bottom feeder in this division.

Fooch: Any thoughts on placing odds for when Crabtree signs with the 49ers?  Given how much this holdout would seem to affect his performance, at some point do you take him off the board, or at least broaden his odds for rookie of the year?

RG: With the advent of twitter and with inside reporters like Terrell Owens breaking all the good stories we have not looked at running when will Michael Crabtree sign, because there is the risk it could be available before it becomes public information.  We have made adjustments to Michael Crabtree and have moved him to 75/1 to win ROY as he really has no chance at being relevant this season.