Share All sharing options for: The Future is Now: What Good is 2-0?

Fooch's Note: Make sure and check out today's game thread.

This is going to be a quick post, I promise. Just something to get you ready for today's game (and the rest of the season)...

Through their first 2 games, the 49ers are 2-0 overall and 2-0 within the NFC West division. Of course, they did the same thing in 2007 - thanks to Fooch for correcting the "stats" guy's "stat" of the day from last week - and we all know how poorly that season ended. So, in the specific case of recent 49er teams, perhaps 2-0 doesn't give us much hope. But what if this year's Niner team isn't like the 2007 squad. Alternatively, what if this year's 49ers are less of a statistical fluke (ala 2007), and more like the statistical norm? That's the subject of this post: What does recent NFL history (2002 to 2008) tell us about being 2-0 overall or 2-0 in the division?

As you can see, the 49ers winning their first 2 division games makes them about 30 times more likely to win the NFC West than if they would have started 0-2, and a little over twice as likely to win the division than if they would have started 1-1. Also, notice that a 2-0 divisional record makes the 49ers better than even money to end the season as division champion. And just so you know, the odds of these differences being totally due to random chance are more than 1 in a million from a statistical perspective. In other words, the benefit of being 2-0 in the division as it relates to winning the division is no fluke.

After the jump, I'll answer three more questions about the being 2-0...

Based on the 2002-2008 NFL seasons, here's a table showing the average number of regular season games teams have ended up winning after they started that season 0-2, 1-1, or 2-0 respectively:

Now, if we single out the 2-0 teams, here's a chart showing how often 2-0 teams have won a specific amount of regular season games (click to enlarge): 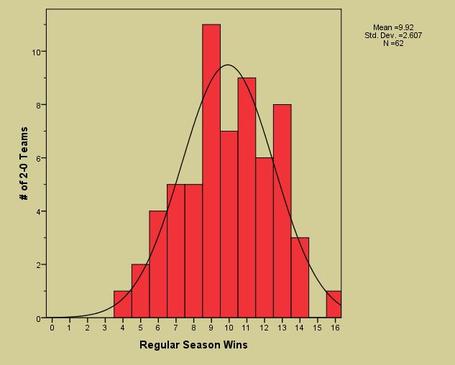 Speaking of the playoffs...

As the table shows, a 2-0 record means that the odds are 3-2 in favor of the 49ers making the playoffs this season. Furthermore, they're about 5 times more likely to make playoffs than if they would have started the season 0-2. Again, let me mention that the odds of these differences being totally due to random chance are about 1 in 100,000 from a statistical perspective. In other words, the benefit of being 2-0 as it relates to making the playoffs is no fluke.

Answering this question is a little trickier because there have only been 14 Super Bowl participants since 2002. In fact, that sample size is so small that I can't give you a valid statistical conclusion. Instead, I'll just tell you the following:

Can you name the Super Bowl team from the past 7 seasons that started 0-2?

Before you answer, let me also tell you the following:

So which team is the only team since 2002 to start 0-2 and either make or win the Super Bowl? Here's a hint:

So, to sum up...By virtue of their 2-0 record both overall and within their division, the 49ers

Hopefully this reinforces the optimists among us and gives hope to the pessimists. Enjoy the game today. Go Niners!

*Just in case you're wondering, I constantly use 2002-2008 as my data set because 2002 is when the NFL went to its current 8-division alignment. Going back farther in time than that would be like comparing apples to oranges.