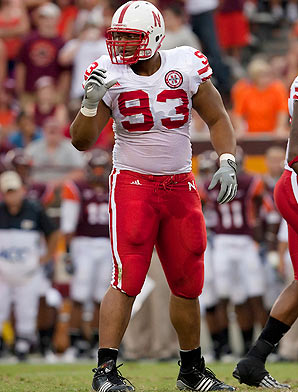 This is a new segment that Fooch wanted to incorporate for the offseason. The purpose of the new segment is to take an individual, in-depth look at some of the top college players in the Nation. From today (January 12th) up until the day before the draft (April 21st), I will be writing articles on 100 different players in the next 100 days, hence the 100 in 100 title. The whole idea behind the 100 in 100 is to focus the conversation solely on the specific player that the particular articles will be covering. Deeper in to the article, I will cover the player's attributes, awards earned, honors earned, highlights (if available), and their NCAA college career stats.

With that, I would like to open this segment up with undeniably the best college football player entering the 2010 NFL Draft. Ndamukong Suh in the '09-'10 Season wreaked havoc on opposing offensive lines, running backs, and most of all quarterbacks. His constant interruption in offensive schemes made it nearly impossible for offensive coordinators to have a ton of success against the Nebraska Cornhuskers defense. Several of Suh's teammates benefited statistically from the relentless pressure that he inflicted. Ndamukong was nominated for for every single award he was eligible for and brought home 5 defensive awards and was also a nominee for The Heisman Trophy (the 1st defensive player to be nominated since Charles Woodson in 1997) altering the traditional of the specific award typically going to offensive players.

After the jump, I'll get in to some of the specifics regarding Suh. There will also be a highlight video attached for those who may not have had a good opportunity to see Suh in action.

As you can see in the video, if you haven't already seen that much of Suh, he is at the college level nearly unstopable. Once he get's to the quarter back, he most often throws them like rag dolls...that is just a small demonstration of his strength.

A majority of the college football experts have Suh going as the number one overall pick to the St. Louis Rams while few others believe that Suh will be passed up for quarterback Jimmy Clausen as the number one overall pick in the upcoming draft. I, myself, happen to believe that Suh will not be passed up. Head Coach Steve Spagnuolo of the Rams, is the former defensive coordinator for the New York football Giants. It is my suspicion, considering that he was used to having such a dynamic defensive line while in New York, that there is slim chance that he and the General Manager pass on the best player in college football in Ndamukong Suh. Projection: 1st or 2nd overall pick in the 2010 NFL Draft.