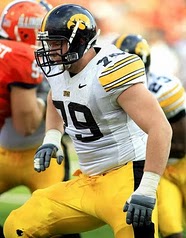 This is a new segment that Fooch wanted to incorporate for the offseason. The purpose of the new segment is to take an individual, in-depth look at some of the top college players in the Nation. From (January 12th) up until the day before the draft (April 21st), I will be writing articles on 100 different players in the next 100 days, hence the 100 in 100 title. The whole idea behind the 100 in 100 is to focus the conversation solely on the specific player that the particular articles will be covering. Deeper in to the article, I will cover the player's attributes, awards earned, honors earned, highlights (if available), and their NCAA college career stats.

I have to admit that I wasn't that high on Bulaga coming in to the '09 season but after watching a game or two and most specifically the Orange Bowl, I found myself changing my tune. Bulaga managed in that game to completely dominate the opponent. He consistently smashed whoever got in his way in to the ground. He does have some flaws in his game but the potential is there and the sky is the limit. Bulaga missed three games due to a thyroid condition. Despite the Thyroid issue, Bulaga still managed to earn Big 10 Offensive Lineman of the year honors. Bulaga is one of the faster left tackles coming in to the draft this year but is forgoing his Senior year to enter the 2010 NFL Draft where he most likely will be selected as a first rounder.

After the jump, I'll get in to some of the specifics regarding Bulaga. There will also be a highlight video attached for those who may not have had a good opportunity to see Bulaga in action.

As the video displays, Bulaga is not perfect and there are some things that he can work on to be great at the next level on. However, if he ends up a 49er, I will be extremely happy with the pick, as will a lot of Niner fans for years to come. He is stronger against the run than he is against the pass, but technique can be fine tuned when he gets to the next level.

With Bulaga's performance on the National stage of the Orange Bowl, I would imagine what ever his projection in the first round went up a bit. The times that he had the chance to face off against Derrick Morgan (DE for Georgia Tech), who will also be a potential first rounder, Bulaga most often got the better of him. With a bunch of teams in need of help in the offensive line department, there will be a broad range of teams gunning for him. So for this specific post, I will leave out the possible teams that could select him. Projection: 1st round, picks 10-20. He is 6'6" 312