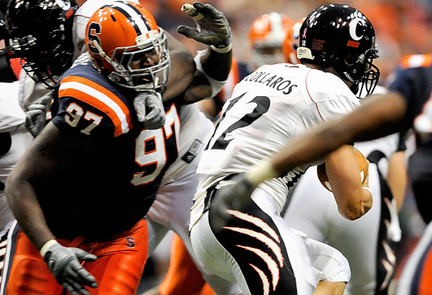 Arthur Jones, the Nose Tackle for the Syracuse Orangemen was regarded fairly high at the beginning of his collegiate career. However, after a freak injury in the weight room in the '08 Season, Jones tore his left pectorial muscle and in doing so had to have surgery. At the beginning of the '09 Season he seemed to have recovered okay but once again, a little bit past mid-season, Jones suffered another crucial injury with a torn lateral meniscus in his knee which require him to have a second surgery in two seasons. The 6'3" 303 lb Nose Tackle has been plagued with injury throughout his career which in turn will leave alot of question marks in the minds of those that will consider drafting him.

Jones leaves the Orangemen with a record for interior lineman with 38.5 Tackles for loss. When healthy, he was considered among the top candidates coming out but I imagine with all the surgeries and injuries, his stock had taken a dramatic hit. Depending on how far he falls in the draft, he may be worth some consideration.

Below, we'll look at some of Jones' stats, highlights, and awards...

Side note: There are just a few more slots available in the community mock draft we will be having here at Niners Nation. If you are interested, please make sure you get over to the post and sign up as quickly as possible. Fooch will be posting a list on the front page tomorrow of the participants that we currently have. Thanks.

If Jones can keep that knee healthy, he has the chance to be a very effective Nose Tackle in the NFL. He's going to need to pick up some more moves and will have to work on using his hands alot more. Overall, Jones could go as high as the 3rd round and as late as the 5th. His injuries have made it really difficult to predict where exactly he will go.