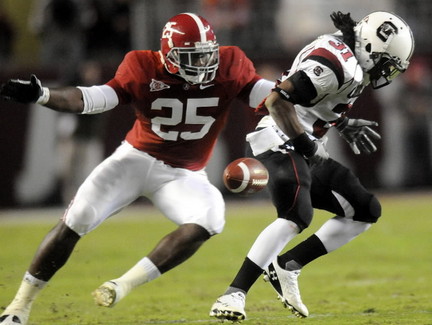 Rolando McClain is a name that we may be hearing for years to come on Sunday's. Recently Bay Area Sports Writer Matt Maiocco released a mock draft with us taking McClain with our 13th pick in the first round of the draft. While this selection seemed to have been split on both sides of wanting him and not wanting him, I personally had to disagree. McClain will be a special player at the next level, there's no doubt, but when you have an offense that sputtered as much as ours did in the '09 Season, I think that we need to patch up those holes first and foremost. I think it would be a mistake to ignore this major factor. He will most likely be selected before our pick in any case as I will predict at the bottom of the article.

The Junior linebacker emerged as the top linebacker in the country throughout the course of his collegiate career with several spectacular plays. Most recently he helped the Crimson Tide break the drought and win The National Championship Game; their first since 1992 where the Tide beat the Hurricanes.

McClain has all the tangibles one could ask for in a linebacker and some comparisons in style of play have been drawn to our own Patrick Willis. The Crimson Tide Linebacker has an uncanny ability to see the entire field on any given play. He can cover and he can come up and ring someone's bell against the rush. He will be one of the most dynamic players entering the draft this year bar-none.

Below, We'll take a look at some of the highlights, stats, and awards that McClain has racked up throughout his career...

As the video displays, and as you can see, McClain has a natural ability to sniff out the ball even if it's on the complete other side of the field. His ability to weave in and out of would-be blockers to get to the ball carrier is going to take him a long way in the National Football League. He is ready for the next level and he'll be an exciting player to follow.

Rolando McClain should go fairly high in the 2010 NFL Draft. Several teams in the top ten could take McClain but I don't think he would last past the 11th or 12th in the first round. It would take quite a bit of shuffling and unusual picks for McClain to fall to the 49ers sitting at the 13th pick. Again, just to reiterate what I said above, I don't believe he would fall to the Niners and if he did, I think that they would be well suited to trade the pick away to get more value from a team really salivating over the thoughts of having McClain on their rosters.