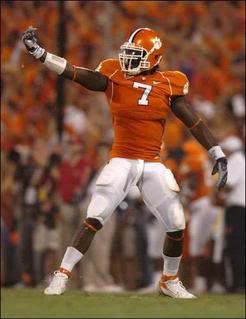 Clemson University will have a few players being selected in the high to mid rounds in this years draft. Ricky Sapp is among those who will be entering the NFL in 2010. Sapp was one of the best guys in the front seven for the Tigers throughout his collegiate career. Some have Sapp being selected as high as the first round and others have him not being selected all the way in to the third round.

Sapp dominated many games at the defensive end position but because of his size, he will more than likely be converted in to a linebacker position once in the NFL. Sapp will more than likely find his way in to a starting role right away even if he does fall somewhere in the second or third round. In his four year tenure at Clemson, Sapp managed to sack the quarterback 16 times; he also forced two fumbles.

The Clemson Senior has some great moves off the edge and uses his hands great. This should take him a long way in the NFL along with his natural athletic ability which could land him in a first round selection as some have predicted. Being that I had watched every Clemson game this season, I had the pleasure and privilege of seeing this explosive defensive player in action.  I look forward to seeing many more explosive moves and games from Sapp in his NFL future.

Below, we'll take a look at some of Sapp's honors, stats and a few highlights...

The video is short and sweet but straight to the points that I mentioned above in Sapp's capabilities. There is a few times in the clip that you can see Sapp make excellent moves which leads him in to a free shot at the Quarterback or Running Back. He can speed rush, he can use his arms to break free pushing a Tackle out of his way and running to the inside to make a play, and he uses spin moves from time to time to get in to the quarterback as well. This Defensive End/ Outside Linebacker can do it all and is very well-rounded. Sapp is 6'4" 245 LBS and runs a 10.76 in the 100m.

With all of what Sapp is capable of, it is hard to imagine that he would fall past the first but it's certainly possible with how much other talent there is this year. None the less I see Sapp going somewhere in the late 1st Round of the 2010 Draft.