49ers-Raiders: The World According To Madden

Share All sharing options for: 49ers-Raiders: The World According To Madden 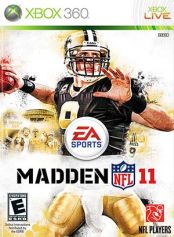 The Madden simulations (used loosely) return today for tomorrow's matchup against the Oakland Raiders. Keep in mind, folks, that this is all for fun, and in no way, shape, or form am I really claiming that this "simulation," is actually a simulation at all. It's just a fun look to take before a game. I find that occasionally some things will be pretty on point. Good players generally play good and bad players generally play bad. Of course the stats never come out looking great. But, and here's a "for instance," the 49ers get beat by tight ends over the middle in Madden, which is pretty darn true to life, no?

So basically, the situation is that I pop in Madden NFL 11 for the Xbox 360, turn the game on All-Madden difficulty with something like 8-minute quarters. I be sure to make the roster accurate, and I watch the game - providing commentary to all of you. At some point this year, I'd love to record a full game and provide audio commentary, but that's for the future. For now it's a good ol' text breakdown.

I'll do my best to adhere to the injury reports, but again, it's not always easy to do so. Let's get to it, make the jump.

The 49ers are kicking off and Cartwright takes it at the four yard line. He gets to the 26-yard line.

Raiders First Drive: From under center, it's Michael Bush, who gets three yards before being brought down by Parys Haralson. It's another run, and the 49ers blitz and bring Bush down after two yards. 3rd and 5 to go for the Raiders, who go from the shotgun. It's a pass to Michael Bush and a Raiders first down.

From under center, it's another handoff - or no, it's a fake, and it's a complete pass to Louis Murphy for a 12-yard gain bringing up another first down. Collinsworth rants about establishing the run and what not. Campbell throws a swing pass to Bush on the right side and Manny Lawson absolutely blows him up for a four-yard loss. Beast and a half. Second down with fourteen yards to go on their own 49-yard line, Campbell takes the shotgun snap and throws a quick pass over the middle to TE Zach Miller, who turns upfield and is blasted by Patrick Willis, forcing a fumble that is eventually recovered by CB Shawntae Spencer. The 49ers get a turnover for once.

After The Turnover: Smith from under center hands off to Gore on the left side, who gets two yards. Then another run to the left side, the same run, to be exact, way outside after Gore was decreased in the last update, and he gets five yards. 3rd and three for the 49ers and it's a snap directly to Frank Gore who runs up the middle and picks up ... well look at that, 25-yards and a 49ers first down.

From under center, it's a pass to the left side to Ted Ginn Jr., and he picks up ten yards. Another first down for the 49ers. It's a handoff to Gore, and he gets nothing on the play. The next play is another yard for Gore, wooh. 3rd and 8 to go. From under center, Smith overthrows Crabtree on the right side bringing up a fourth down. Joe Nedney comes up to kick the easy field goal, and it's good. The 49ers get on the board first with a 25-yard field goal. 49ers lead 3-0.

The kickoff is taken at the ten yard line and it's taken to the thirty.

After The Score: From under center, it's a handoff to the left, and Justin Smith brings Bush down after three yards. Second nad seven for the Raiders, from the I formation, it's a toss left and Haralson drills Bush for no loss or gain. Third down with seven to go,  and it's a pass to the right to Higgins, who looks to have room but Willis closes quick and limits him to a five-yard gain. It's a punt.

Ginn takes the punt at the 15-yard line and goes to the 27-yard line.

After The Punt: Smith from the shotgun hands off to Gore and it's a three-yard loss. Cool. Another run to Gore. He gets two yards. I'm going to sleep now. 3rd and 10 for the Niners, from the shotgun it's a pass. Or not, Smith is sacked by Richard Seymour for an eight yard loss.

The punt doesn't get much. Raiders have the ball at their own 35-yard line.

After That Silliness: The first down pass is incomplete and the second down run picks up two yards. 3rd and 8 for the Raiders. On third, it's a pass to the right side to Higgins, but he's pushed out after four yards, bringing up another fourth down and Raiders punt.

Punt is downed at the eight-yard line.

I'm Falling Asleep: Smith from the shotgun, and it's a hand off to Frank Gore, who picks up seven yards miraculously. 2nd and 3, it's a run to Gore, imagine that. 3rd and 1 for the 49ers. It's a third down pass to WR Dominique Zeigler, who picks up just enough for a first down.

Shotgun on first down for the 49ers, who are running out the clock for some reason with two minutes to go in the second quarter. I'm so confused. They have all of their timeouts with two minutes and a three point lead, with a first down on the twenty yard line and the 49ers are running out the clock. It's a nine yard pass to Ted Ginn. Then the 49ers run their hurry up offense and it's a short pass to Ginn for a first down, and he goes out of bounds. What the ever loving [site decorum] is going on right now? At least the clock management in Madden is accurate to the 49ers

From the shotgun, Smith is drilled as he throws to Vernon Davis, and it's almost picked off. Incomplete, 2nd and 10. Smith steps into a sack that is entirely his fault. 3rd and 17 and I'm very, very bored. From the gun, Smith is hit again as he throws and it's Chris Johnson picking him off. Oh joy. Now the Raiders can score.

After Smith Throws a Pick: Run to Bush, dropped for a loss. Incomplete pass that's batted down by Higgins. 3rd and 10. Incomplete pass. Raiders kick an easy field goal ... and of course, they miss it. Hilarious. 49ers lead 3-0.

End of the Half: 49ers run the ball and pick up significant yardage when it doesn't matter. Play clock runs out.

HALFTIME: 49ers lead 3-0 and this is just boring to watch. I don't want to write this anymore. Mike "Jimmy Raye" Johnson doesn't fare too well on Madden, it seems.

Ginn takes the kickoff at the three-yard line and takes it to the 25.

First Drive of the Half: Gore takes the ... HANDOFF! IMAGINE THAT?! He picks up six yards though, which is cool. 2nd and 4 for the 49ers. From under center, Smith throws it to ... Moran Norris for nine yards. Hah. In your face, Raiders, you got beat by a guy who cant think.

Run to Gore on first for nine yards. Another run to Gore on second for three yards. My God this is boring. 1st and 10, handoff to Gore on the left side for a loss. From under center, it's a handoff to Frank Gore up the middle, Gore picks up one yard. This is so surreal. It's a deep pass to Ginn on third down, when he had two guys over the middle wide open. Incomplete pass. 49ers punt. Goes into the end zone.

I'm Asleep: Raiders begin this drive under center, and it's a handoff to Michael Bush, who is brought down for a one-yard loss by Patrick Willis. Handoff again, and it's for no gun to Parys Haralson. Gus Johnson wonders why they're still running. 3rd and 11 for the Raiders, from the shotgun it's a low snap by Campbell handles it, then he's pressured by CB Will James, and it's an incomplete pass as Campbell throws it away.

Get Ready For Runs: Smith hands off to Brian Westbrook, who goes 16 yards up the middle. Hey, that's cool. Do that again. So they do, and it's a three-yard gain. Handoff to Gore on second down and it gets two yards. 3rd and five.Smith, from the shotgun, hands off to Frank Gore who gets a yard. You have got to be kidding me. Did that really just happen? Madden's engine is so stupid sometimes. It's actually set up as the 49ers "protecting" their 3-0 lead and only running the ball. Amazing.

Sigh: Toss to Frank Gore on the right side and Gore breaks a tackle and ... oh look, he's free. Running free and nobody will catch him, Gore runs for 75 yards and a touchdown, and the 49ers go for the two point conversion. It's a pass to Ginn on the left sideline and NOBODY is near him. Ginn touches his toes and steps out of bounds ... on the two point conversion attempt. Huh ... 49ers lead 12-0.

For the Frank Gore touchdown, you can see a video here!

NIIIIIIIIIIIIIIINERS: Raiders run the ball for no gain. Campbell takes the second down snap from the gun and it's a six yard pass on the left sideline. Then more shotgun and the swing pass is broken up at the line of scrimmage. The Raiders elect to punt with five minutes to go in the game on 4th and 4. Interesting, I guess.

GUESS WHAT THEY'RE GOING TO DO GUYS?: From the gun, it's a ... pass. A first down pass in the fourth when they actually need to use clock. It's almost picked off, and if it was, it would have been six. Great stuff. 2nd and 10 for the 49ers, and it's ... another pass. This one to Ginn for three yards over the middle. This is surreal. My mind is exploding. 3rd and 7 for the 49ers. Gore on the draw gets six yards, and it's 4th and inches for the 49ers. The Niners punt and it is taken at the fifteen, and they get five yards.

More Running I Guess: Gore gets two yards and flexes for some reason. 2nd and 8 as we reach the two-minute warning. Two more yards on second down for Gore, and the Raiders take a timeout. Three yards to Gore this time, and the Raiders spend another timeout. The 49ers punt. Ball is taken to the 36-yard line.

Raiduhs: Campbell is sacked by Justin Smith for a seven yard loss. From the gun on second down, it's a pass to Higgins for two yards as Haralson tries to strip the ball. 3rd and 15, and Campbell throws from the shotgun and it's picked off by ... Taylor Mays! Bizarre.

For the Taylor Mays interception, you can see a video here!

LOL: 49ers take a kneel down and the Raiders take a timeout. One minute to go in the game. Another kneeldown. Then another and the 49ers win this game 12-0.

The Old Spice Swagger Player of the Game is Frank Gore, as you can imagine.